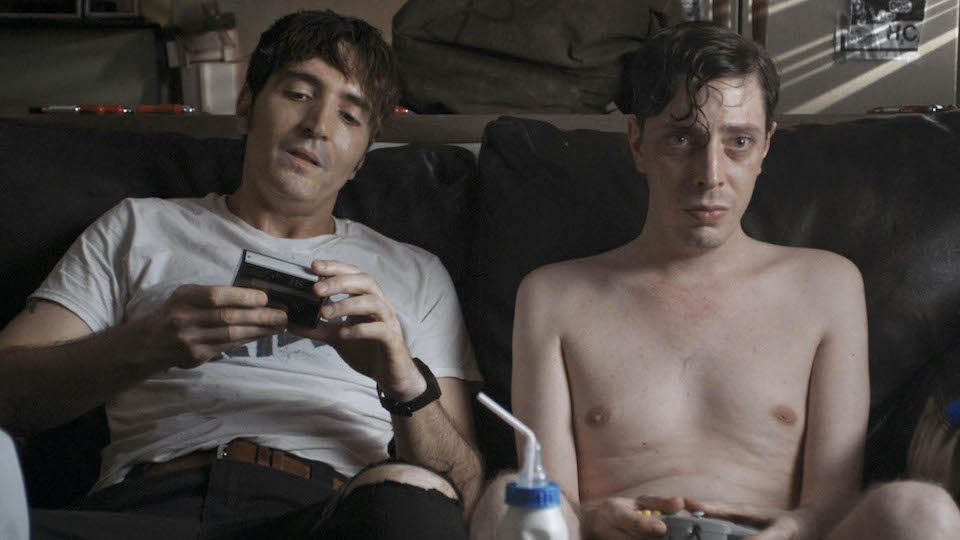 Objectively speaking, Relaxer is not a bad film. I just hated it from start to finish. If you ever had the fantasy of dropping out of mainstream life, staying home all day, playing video games, and eating junk food, Joel Potrykus’ film should effectively dispel you of this notion. Like some horrible, fevered anxiety dream, Relaxer is one of the most stressful, squirm-inducing movie experiences I can remember.

The film is set in 1999, and Abbie (Joshua Burge) is an unemployed Gen-X slacker, seemingly surviving in life by completing a series of degrading and humiliating challenges set by his brother Cam (David Dastmalchian). The latest of which is to complete the fabled level 256 of Pac-Man, and he cannot leave the couch until he succeeds. This is the level of Pac-Man that famously breaks the game. With Y2K just around the corner, the game becomes a weird pre-cursor to the impending digital apocalypse.

Shot on a purpose-built set inside a garage owned by the parents of the production designer, Relaxer never leaves the dark and dingy apartment where Abbie lives, just as he never leaves the couch for the entire 91-minutes of the film. As an exercise in avant-garde filmmaking, it is undoubtedly a success, wringing every ounce of tension from this single location, with long takes and terrific sound design. Abbie’s anguished efforts to feed and hydrate himself with only a battered takeout cup and a handy grabber set my teeth on edge. I was screaming at him to get off the fucking couch and get a cup of water! When he started to drink the sweat off his own body, I was ready to retch.

Perhaps I should have been shouting at myself to stop watching. The film is only 91-minutes long, but as the months trip by in a surreal haze, I felt like I was experience Relaxer in real time. It is truly an excruciating watch. A grotesque, couch-potato comedy satire of America’s loser-class, it at times feels like a surreal endurance horror. Potrykus seems to be taking aim at the trappings of society, where like Abbie we are simply helpless to stand up and walk away from the machine grinding us into oblivion.

There’s more going on here than just the Pac-Man challenge and gross squalor of Abbie’s life, but it’s hard to understand how much of what we are seeing is just the complete fracturing of Abbie’s mental state. I am sure there is an audience for this film, especially fans of 90s nostalgia, and those who enjoy the weirder corners of American indie cinema. I found it to be a uniquely stressful and depressing experience, and one I have no desire to ever repeat.

This limited edition release from new label on the block Anti-Worlds comes generously packed out with special features. There is an optional director commentary. There’s 7-minutes of behind the scenes footage from the cramped and claustrophobic set. There’s also a deleted scene where Abbie gets a visit from a pizza delivery guy, and they get into a pathetic argument about the moon landing.

There’s 10-minutes of rehearsal footage with Potrykus and Joshua Burge. Milk Party is some home movie footage of a milk drinking challenge which no doubt inspired the opening scene in the film. The disc also comes with a selection of Potrykus’ short films and music videos.

There’s also an on-set image gallery, the theatrical trailer which is actually really great and would have made me want to see the film. Finally there are the David Dastmalchian promos, in which he talks to the camera in character and challenges us, in a vaguely threatening way, to watch the film.

However, that is just the first disc. On disc two of this limited edition release we are treated to Joel Potrykus’ 2014 film Buzzard. This also comes with an audio commentary, and a vast array of other special features including an alternative cut of the film with rehearsal footage, a short documentary from when the film screened at the Locarno Film Festival, some behind the scenes footage, deleted and alternative scenes, a short guide to the film’s hidden easter eggs, an image gallery, and a selection of trailers.

Relaxer is available to order at https://anti-worldsreleasing.co.uk