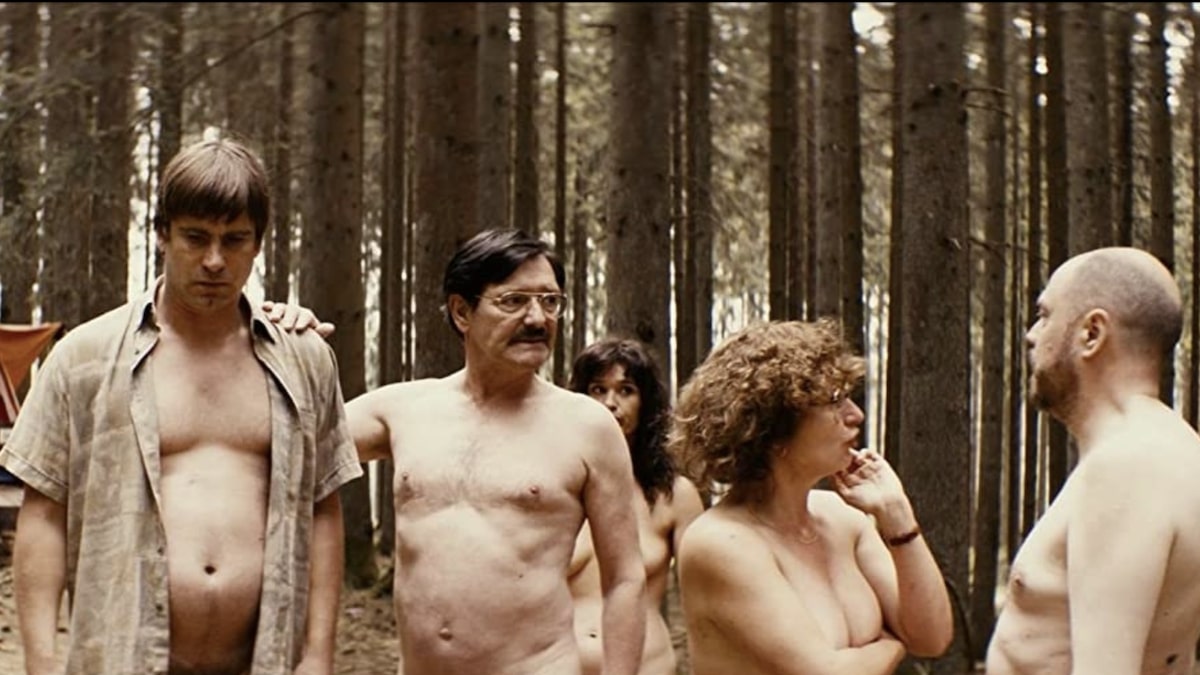 Renowned TV director Tim Meilants makes his feature film debut with the existential tragi-comedy ‘Patrick’, arriving on Blu-ray this month, courtesy of the cult, boutique label ANTI-WORLDS. True to their mission statement of celebrating unique, provocative, and challenging films, this weird little slice of Belgian cinema is quite unlike anything you’ve ever seen.

Patrick (Kevin Janssens) is the handyman at a nudist campsite in the Ardennes, which is owned by his elderly parents. He is a quiet, awkward man, hunched at the shoulders, and struggles to maintain eye contact with others. He’s uncomfortable in his skin, always wearing an open shirt over his bulky frame, though nothing else of course. If the sight of the human body in all its natural glory causes you any sort of discomfort, then this isn’t the film for you.

He becomes anxiously obsessed when his meticulously ordered tool shed is disturbed by one of his hammers going missing. When his ailing father dies suddenly, ownership of the camp passes to Patrick, but his grief simply manifests in a deeper obsession with finding his hammer. Meanwhile, one of the prominent couples at the camp are scheming to take the camp from Patrick whilst he is in this vulnerable state. Patrick suspects someone has taken his hammer to drive him mad and make him seem incompetent. A plan that might be working.

It’s an intriguing set up for a character study, made all the more remarkable by the fact that the entire film is played out in almost total nudity. But whatever shock value lies in having a nudist camp as the setting for this story, it quickly dissipates, and the real thrill and enjoyment comes from the internal politics of the camp, the complex relationships, and the scheming power struggles for supremacy.

Best known for his visually stylish work in television (most notably in ‘Peaky Blinders‘ and ‘The Terror’), director Tim Mielants shows off a different side in this tender and funny drama. The natural cinematography and mournful score perfectly suit the strange little mystery we are witnessing. The grief metaphor is obvious, to the point that other characters even tell Patrick that finding his hammer won’t bring his father back, but it really works and is very affecting.

The naturalism also extends to the cast, who are uniformly terrific. There’s a distinct Mike Leigh feel to the performances, as if they have been rehearsed to the nth degree, and the actors have simply disappeared. Pierre Bokma and Ariane Van Vliet in particular, as the scheming Herman and Liliane, are brilliant. But the plaudits really must go to Kevin Janssens. He takes the classic trope of the uncommunicative hulking brute, and does something wholly original with it. A rare treat, much like the film itself.

ANTI-WORLDS have put together an excellent blu-ray package for ‘Patrick’. There are interviews with Tim Mielants and producer Bart Van Langendonck, and also a feature length commentary with Mielants and co-writer Benjamin Sprengers. There’s also a making-of featurette, a music video, three trailers, and a 24-page booklet with new essays on the film.