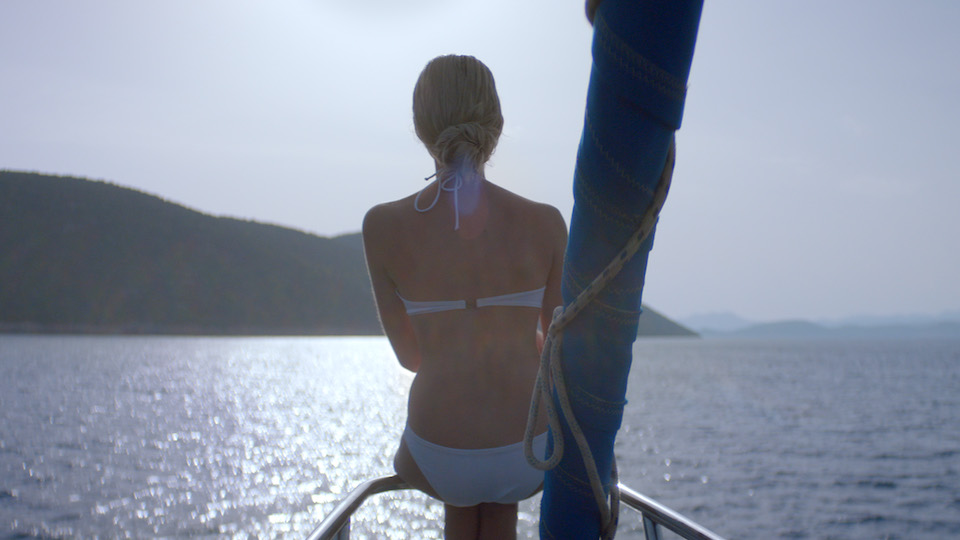 In a capitalist world, every interaction becomes a transaction. So if everything has a price, what are we willing to stump up in order to live a nice life? It’s a bleak and desperately cold notion, but this moral conundrum lies at the very heart of Isabella Eklöf’s astonishing debut feature film, the Danish crime thriller Holiday.

Sascha (Victoria Carmen Sonne) joins up with her drug dealing boyfriend Michael (Lai Yde) and his family (gang members and their wives and kids) for a holiday at a luxury villa in the Turkish Riviera. She is the new girl on the block, and like us the viewer, is trying to figure out the dynamic of this group. The only thing for certain, is that Michael is the alpha dog in this world.

They lounge around in the sunshine, go out for nice meals, and live it up in exclusive night clubs. It should seem idyllic, but Eklöf captures all of this with a detached and dispassionate coolness, reminding us constantly of the price Sascha is paying to live like this. She – and more specifically her body – is at the toxic whim of a dangerous and controlling man.

Her friendship with Thomas (Thijs Römer), a nice Dutch man who owns a boat in the harbour offers a counterpoint to Michael, and their gentle flirtations suggest Sascha could find a different kind of life (or escape) with him. But Michael isn’t the kind of man who likes other people playing with his things, and Thomas soon finds himself sucked into the orbit of Michael’s world.

Holiday is an extremely challenging film, dealing with complex material, and it is by no means an easy watch. Eklöf paces, structures, and frames the film in such a way that you’re never quite sure what is going on. It lends the film an almost unbearable tension, as Sascha finds herself in this incredibly dark world, where the threat of physical and sexual violence is in every single scene.

When the violence does come, it does so in truly harrowing fashion. This is a patriarchal world of unburdened capitalism and toxic masculinity. The hideous imbalance of power is writ large in a shocking and explicit single shot rape scene that is reminiscent of Gaspar Noé’s Irreversible – look out for the witness who walks away – and is just as difficult to watch. It shifts the entire film off its axis, and paves the way for an incredibly tense and unpredictable final act.

The limited-edition Blu-ray comes with an excellent selection of special features, including On Holiday, a 20-minute interview with writer-director Isabella Eklöf talking about the development of her feature film debut. There is a 30-minute Q&A with Eklöf conducted at the Institute of Contemporary Arts in London from August 2019.

There is a short-deleted scene of three young lads trying to hit on Sascha before Michael picks her up at the start of the film. There’s also a short documentary directed by Eklöf about the acclaimed poet Willy Kyrklund, and finally on this disc is the theatrical trailer.

Holiday is available to order from https://anti-worldsreleasing.co.uk