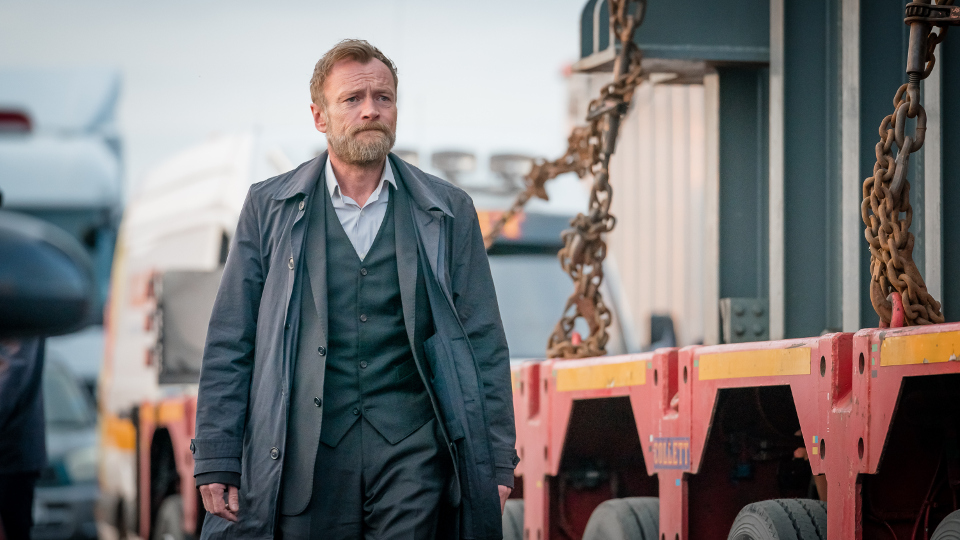 In the latest episode of COBRA, Sutherland (Robert Carlyle) was forced to consider more extreme measures to retain control of the country.

The episode opened up with the police interviewing Rachel Sutherland (Lucy Cohu) and showing her the video of Ellie (Marisa Abela) confessing to her involvement in her friend’s death. They wanted to know if she’d coached her daughter to lie about what really happened and if she had discussed it with Peter Mott (Edward Bennett). Rachel said her daughter had admitted to an understandable error of judgement due to the death of her best friend. She also said the police needed to decide if they were going to charge Ellie or not.

At the latest COBRA meeting, Sutherland decided that he would travel by helicopter to the Chequers meeting. Fraser (Richard Dormer) gave an update on the Red Zone, explaining they had established a new Gold Command Center at an air base and that they would now only send essential supplies to the hospital. Buses were also being arranged to move people who wanted to leave. Sutherland thought it was all a waste of time and resources.

The actions of People’s Justice were causing supply problems that included fuel and medical supplies. This was causing people to panic buy and Sutherland had a dig at Archie (David Haig) for dismissing the issues earlier as minor. MI5’s Eleanor James (Lisa Palfrey) advised that they didn’t underestimate Scott Minett (Charlie Carrick) and Archie suggested an assassination. Sutherland said he’d go ahead with the meeting but he wasn’t going to let them push him around.

Elsewhere in London, Edin (Alexandre Willaume) headed to a secret meeting with Toni Lulin but didn’t know he was under surveillance by MI5. Peter Mott was arrested and Archie took a report to Eleanor about information found on Peter’s computer about coaching Ellie. Archie dug for information on the situation with Anna Marshall (Victoria Hamilton). Eleanor said she was handling it and refused to confirm if they were bugging her flat or not. She later informed Anna that Edin was an assassin known as Nico who worked for Lulin.

Sutherland and Anna boarded the helicopter and looked at the chaos around the city below. As they were landing at Chequers, Scott Minett made a speech to his supporters saying the government were on the ropes and he was off to meet them with the lorry drivers. He promised to deliver their message and that soon there would be a new government. He said they’d take the rest of the fuel and that history would look back on them as the match that lit the flame of the people’s uprising.

Back at Chequers, the General Secretary of the Lorry Drivers Unions, Harry Rowntree (Con O’Neill) arrived. He was met by Archie, followed by Sutherland and Anna. The Prime Minister invited him inside for tea before the meeting.

Back with Scott he spoke again with reporter Manish Patel (Danny Ashok) and showed him around the streets where he lived. He denied again that he was a racist and Manish said he was pretty normal and smart. Scott took Manish back to his house to meet his family and see where he lived. As he left for the Chequers meeting he was hit by a speeding car in front of his home. It wasn’t an accident though as the car made a point of also reversing back over him. Manish went to his aid but found him bleeding out as he died.

At Chequers, Sutherland was given the news about Scott and announced that he’d been killed in a hit and run. Rowntree left the meeting upon hearing the news and said People’s Justice had called for a boycott on talks until Scott’s death was clarified. Sutherland was annoyed because they needed to agree on a way forward. Rowntree questioned if Sutherland had Scott killed. Sutherland lost his temper and promised he was coming for him. He told Anna they were going back to London and would meet with COBRA again.

Anna’s daughter Tess (Grace Hogg-Robinson) asked if she could come and visit her mum at the flat but she told her to stay at home. After Scott’s death rioting had broken out around the capital and she said it wasn’t safe. At her flat, Edin held a meeting and MI5 continued to surveil him. The meeting was disturbed by Anna’s daughter and they refused to let her leave. Edin pulled his gun and threatened the people he was meeting with in order to get the girl to safety.

At the COBRA meeting, Sutherland requested troops on the streets to stem the rioting. He authorised the use of CS Gas and baton rounds. When pushed on his orders should the military come under attack, Sutherland said they would restore authority, clear the roads for the transformer and deal robustly with the rioters.

Elsewhere in the episode, Fraser attended his father’s funeral with Francine Bridge (Marsha Thomason) accompanying him for support. Fraser saw his daughter but his ex-wife called her away. She wished Francine good luck with Fraser, presuming that they were together. They went for a drink together after the funeral and some of the racist locals took issue with Francine. They decided it was best to leave.

Fraser went back to Francine’s apartment and chatted about why he left his wife. Francine listened before confessing that she liked him. He said he liked her too and then they shared a kiss before sleeping together. Fraser had to dash soon after when news came in he was needed.

At the end of the episode, as the anarchy worsened, reports came in of people losing their lives. Sutherland summoned the General back to COBRA and ordered the barricades be destroyed. The army moved in with riot shields, batons and guns. They used a vehicle to move the blockade but more protesters appeared holding flares. A molotov cocktail was thrown at the troops which set some of them on fire.

After a phosphorus grenade was thrown Sutherland agonised how to respond. Archie said it was too risky to fight back while Anna reminded him that British troops were under attack on home soil. Sutherland gave the order for the troops to defend themselves with live ammunition if required. In the chaos they opened fire on a photographer when they thought she had a weapon. More shots were fired and some people lost their lives before a cease fire was called.