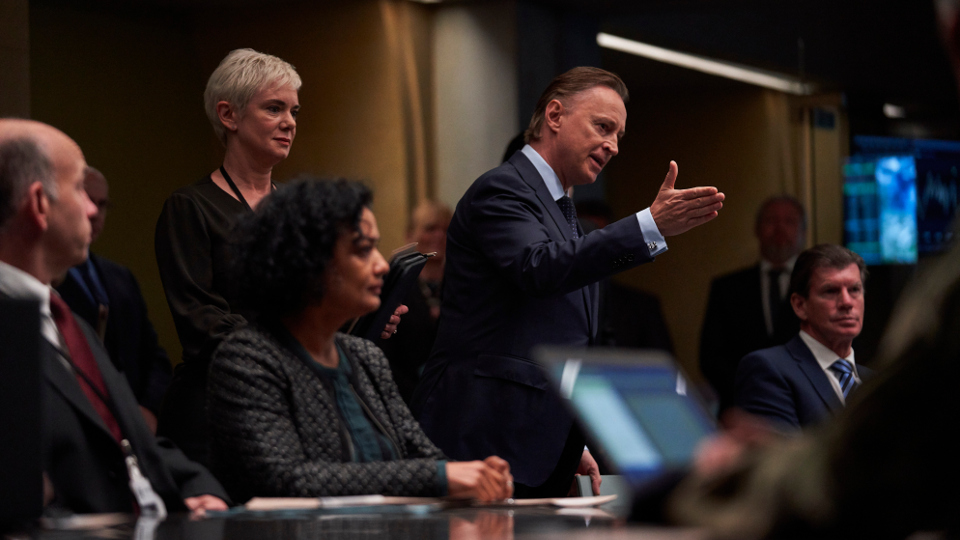 In the fifth episode of COBRA, Sutherland (Robert Carlyle) was faced with some impossible decisions.

Rachel Sutherland (Lucy Cohu) was questioned by police to see if anyone had tried to get Ellie (Marisa Abela) to lie about her involvement in the death of her friend. Peter Mott (Edward Bennett) was also questioned and he had his computer equipment seized.

Sutherland convened COBRA to get an update on the situation in the Red Zone, the rioting and the impending meeting at Chequers. He decided that he and Anna (Victoria Hamilton) would travel by helicopter to avoid the protests. There they met with Harry Rowntree (Con O’Neill), the General Secretary of the Lorry Drivers Unions, and waited for Scott Minnet (Charlie Carrick) to arrive to represent People’s Justice.

Scott promised his supporters that their actions would bring about a new government. However, as he left for London he was killed in a deliberate hit and run. This caused Rowntree to abandon the meeting and leave Sutherland with little choice about a way forward.

Elsewhere in the episode, MI5 had surveillance on Edin (Alexandre Willaume) and discovered he was an assassin known as Nico who worked for Toni Lulin. A meeting he held was interrupted by Anna’s daughter Tess (Grace Hogg-Robinson) and he had to pull a gun to get her to safety.

At the end of the episode, Sutherland decided enough was enough and brought the army in to take control and remove the barricades. They cleared the first barricade but came under attack. Sutherland authorised the use of live ammunition to defend themselves and it caused a new nightmare with innocent people losing their lives.

In episode 6, as anarchy explodes on the streets and the nation is rocked with night upon night of rioting, Fraser and his team reach the endgame in their mission to get the lights switched back on in the Red Zone.

Meanwhile, with his personal life imploding, Sutherland is forced to fight for his political life as Archie finally fires his first shots…

COBRA continues Friday at 9pm on Sky One and NOW TV, all episodes are also available now on-demand. Preview episode 6 with our gallery below: