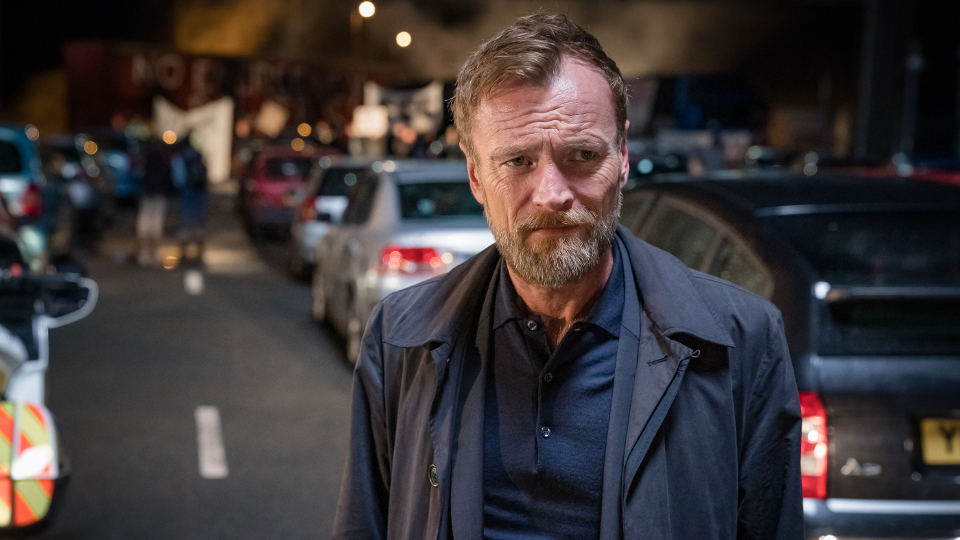 In the third episode of COBRA, Sutherland (Robert Carlyle) decided to travel to the Red Zone to try and ease tensions.

Following the events at the halls of residence at Northumberland University, Chief Constable Collier (Steve Cree) interviewed some of the students and had the rest transported home. He discovered that the ringleader of the convicts had marks on his face. The media dubbed him Freckles and the police put effort into locating him.

Three days later, lorries carrying water began to get hijacked, some people were looting and the situation was deteriorating in the Red Zone. Over 2,000 people took refuge at a makeshift camp set up in the grounds of the hospital. Some groups had begun rioting and they were also running their own protection patrols and dishing out their own forms of justice.

Despite advice from his staff and the police, Sutherland decided he needed to visit the Red Zone. He took certain staff and press along for the trip. Meanwhile, a man who was mistaken for Freckles was attacked and almost killed. Collier managed to save him and get him inside the hospital.

Due to the rioting, Fraser (Richard Dormer) tried to cancel the trip but Sutherland decided to push on after hearing Archie (David Haig) giving an interview on the radio. Anna (Victoria Hamilton) tried to get Sutherland to stay inside the hospital but he defied her and went outside where he gave a speech that resonated with the crowd. He vowed to turn the lights back on.

Elsewhere in the episode, Ellie (Marisa Abela) was interviewed again by the police after new information came to light. She was advised by Peter Mott (Edward Bennett) to stick to her story but she was beginning to feel that she needed to explain the truth.

At the end of the episode, Anna slept with Edin (Alexandre Willaume) again and lied to her husband. Meanwhile, he received a photo by email showing Anna and Edin together after the hotel fire.

In episode 4, as questions are asked about Sutherland’s knowledge of his daughter’s involvement in her friend’s death, Anna seeks the help of Eleanor in handling the new revelations about Edin.

COBRA continues Friday at 9pm on Sky One and NOW TV, all episodes are also available now on-demand. Preview episode 4 with our gallery below: