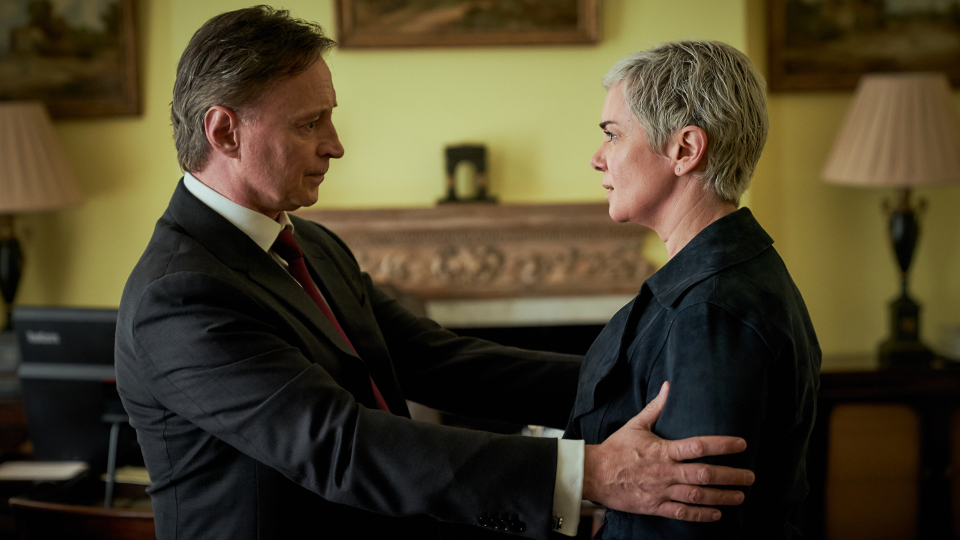 The episode opened up where the second finished, at the Northumberland University halls of residence. As armed police made their way through the building a student was interviewed by Chief Constable Collier (Steve Cree) about what had happened. She explained that the students had been having a party and the escaped convicts had joined them. It was fun at first before one of the convicts, with markings on his face, started harassing the girls and dragging them into rooms. One of the other convicts tried to stop him but was stabbed. The police arranged for buses to transport the students away.

Following the hotel fire, Anna Marshall (Victoria Hamilton) arrived back at work to be greeted by Sutherland. He asked why she hadn’t stayed with Francine Bridge (Marsha Thomason) like she said she would and Anna said she decided to stay in a hotel instead. Sutherland briefed her on the situation at the university and explained his intention to visit.

The action jumped forward three days to show the worsening situation in the Red Zone of North East England. Due to the lack of a new transformer, the area remained without power. A travel ban was in force and people were having to walk miles. Military checkpoints were checking that people had the correct paperwork.

Collier headed to the relief camp at the Royal Northumberland Hospital where over 2,000 had sought refuge. He saw a man strung up to a lamp post with a sign warning people against looting. Certain groups of the public had set up their own protection patrols.

Peter Mott (Edward Bennett) briefed the press on Sutherland’s proposed visit to the Red Zone. He also updated them on the manhunt for the convict who attacked the students. The press had begun referring to him as ‘Freckles’. Cressida McGuire (Katherine Jack) posed a question asking if Sutherland would be making a statement on new information about the party that his daughter Ellie’s (Marisa Abela) friend died at. Mott evaded the question and said they would leave after the next COBRA meeting.

Anna told Sutherland that she had invited Francine to join them on the bus to the Red Zone. He complained about comments she had made against him in the past. Home Secretary Archie Glover-Morgan (David Haig) met them outside the COBRA meeting and sarcastically said he was pleased that Anna hadn’t died in the hotel fire.

Mott updated Ellie and her mother about the revelations from a fellow partygoer. He told her to stick to her story when the police came to talk to her again. Ellie was having second thoughts and wanted to tell the truth.

At the COBRA meeting, Sutherland and Archie sparred over the proposed visit. MI5’s Eleanor James (Lisa Palfrey) agreed with Archie that it was a bad idea. Sutherland wanted to push on with his plan while Archie preferred him to focus on catching Freckles.

Fraser (Richard Dormer) was alerted to the hijacking of a lorry carrying water to the Red Zone. He asked for another lorry to be found to prevent further crisis. He reported it to Anna and Sutherland but was strongly told to just find a solution.

After Sutherland and his convoy left for the Red Zone, Cressida met with Archie. He gave her a tip that Mott had been coaching Ellie on what to say to the police. He dashed off to a radio interview and told her to listen in.

One the bus journey, Sutherland kept an eye on the news and saw that the General Secretary of the Lorry Drivers Unions, Harry Rowntree (Con O’Neill), was complaining about the government. Sutherland took a call from Mott and said he’d talk to him when they stopped.

Back in the relief camp, the bottled water supplies ran out. A man with some kind of skin condition on his face tried to get water for his daughter. A man in the crowd wondered if he was Freckles and then most of the camp turned on him. He was dragged and badly beaten before the mob tried to attach him to the back of a motorbike with a strap round his neck. Collier was alerted and rushed to the man’s defence. He found out that he had vitiligo and managed to free him before evacuating him for medical assistance.

Fraser received news of the lynching and told Sutherland that it wasn’t safe so they should abandon the trip. Anna alerted Sutherland to the interview that Archie was giving where he was taking advantage of the PM being away. Sutherland snapped and decided that they would finish the visit. Collier said it was a bad idea. Meanwhile, Eleanor met with Archie and conspired against Sutherland and Mott.

Sutherland made it to the hospital and Collier advised against going outside. Sutherland asked to see the man who was attacked first. Anna told him that he wasn’t allowed to go outside but after meeting the injured man and his daughter Sutherland defied her and went outside anyway.

He was met by an angry crowd who were shouting and throwing missiles, one of which hit Anna in the face. Sutherland pushed on and took to the stage where he gave a speech. Despite the hostile welcome he managed to calm the crowd and tell them the truth that the man they lynched wasn’t Freckles. He promised to seek justice against those who attacked him and poked fun at those throwing things at him.

He was honest with them that he couldn’t feel their pain but that he was doing everything he could for them. He said the transformer was on its way and he vowed to restore power and turn the lights back on. He promised a reckoning against the vigilantes and those trying to use the situation for political advantage. His speech as met with applause and cheers.

Back inside, Anna received a message from Edin (Alexandre Willaume) asking to meet. Sutherland requested a helicopter to take her back to London.

At the end of the episode, Anna’s husband Sam (Mark Bazeley) messaged her to see if she was back but she was off sleeping with Edin again. After, she took a peek at Edin’s phone and saw a message from someone called Toni Lulin. Back home, Sam received an email with a photo of Anna and Edin together after the hotel fire.