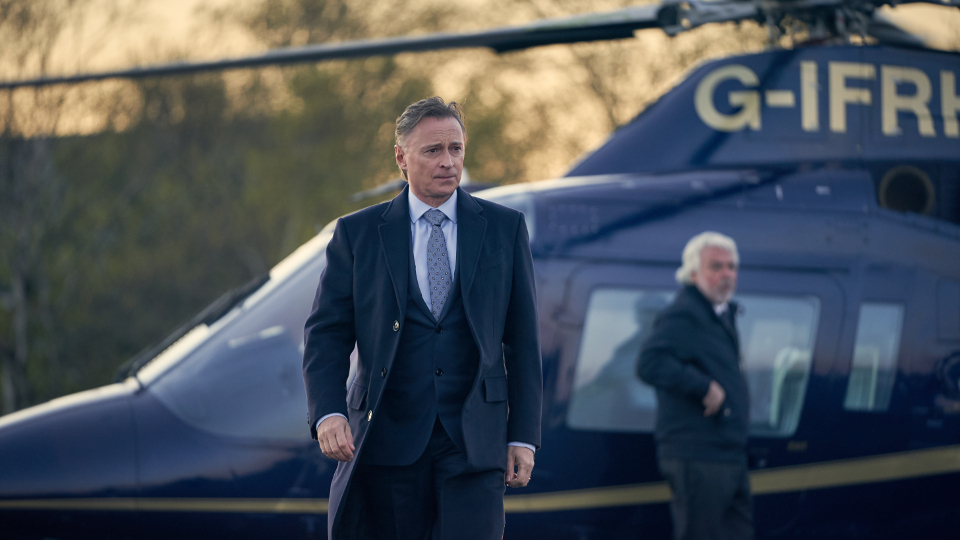 With the possibility of a solar storm wreaking havoc on the UK, Prime Minister Robert Sutherland (Robert Carlyle) assembles the emergency committee COBRA in an effort to combat the situation.

The episode opened up with a flight bound for the UK declaring a fuel emergency. Due to some kind of storm, the plane had spent too long in the air and was unable to reach its intended destination of Newcastle. The plane seemed to be suffering electrical faults and air traffic control were struggling to track it.

Air traffic tried to divert the flight to land at RAF Coningsby but the pilot said they wouldn’t make it and needed to land immediately. The flight crew decided to follow the motorway and attempt to land in some fields. However, due to the electrical faults the plane lost power and looked like it might crash.

The episode then jumped back 24 hours earlier. Sutherland and his wife Rachel (Lucy Cohu) were attending the graduation of their daughter Ellie (Marisa Abela) at the University of Liverpool. Before leaving Sutherland was heckled by a student to resign. He took a phone call from his Chief of Staff, Anna Marshall (Victoria Hamilton) and asked for an update on the situation. She said she hadn’t heard from Fraser (Richard Dormer) but would update him when she did.

Anna arrived home and found Edin (Alexandre Willaume) a past love of hers waiting for her. He wanted to know why she hadn’t answered his letters and she said they didn’t deserve an answer. Her daughter came to the door and Anna asked Edin to leave. He had something he wanted her to hear but she refused and went inside.

Meanwhile, at the Cabinet Office Briefing Room in Whitehall, Fraser was monitoring an incoming solar storm that had the potential to be catastrophic. He called Anna to raise the threat level to significant after multiple large solar flares. Anna updated Sutherland and he called for COBRA to be assembled.

At Downing Street, Anna informed Dominic Knight (Sam Crane) that he was being fired for leaking information to the press. He wasn’t happy and tried to deny it but she knew it was him. She gave him to the end of the day to put his resignation letter in. Sutherland walked in and told him to sort it out by lunch and to leave via the public entrance. Before the COBRA meeting, Sutherland bumped into the Home Secretary Archie Glover-Morgan (David Haig) who was furious over the sacking. To replace Dominic Knight, Anna wanted to bring in Francine Bridge (Marsha Thomason) an ex-Labour MP which didn’t go down well.

Sutherland briefed the meeting on the raising of the threat level due to extreme space weather before handing over to the science team. Archie didn’t take the news seriously and couldn’t understand what all the fuss was about. Fraser explained that the first stage of the storm could knock out satellites, disrupting communication and navigation systems. The second stage was more dangerous as it could knock out the electricity for weeks or even months. Everything depended on if the plasma field sent by the sun came towards earth and had a hot south magnetic orientation. They calculated that they would only have around 30 minutes notice if the solar storm was going to cause issues.

Following more solar flares, the threat level was raised to serious and COBRA had to be recalled. The issue of the effect on aviation was raised and they needed to decide whether to ground all flights or not. Archie pushed to keep flights operational and Sutherland decided to agree.

Later, Anna met with Francine to offer her the vacant job. Francine was tempted but tried to refuse it. Anna kept pushing and also told Francine about Edin turning up. When she returned home she found that Edin had left her a note telling her where he was staying.

An alert came in about the plane that was shown at the start of the episode. Fraser jumped into action and tried to find a solution but it was too late and the plane crashed. The plane broke up on impact and several vehicles were also involved in the crash. Chief Constable Collier (Steve Cree) was driving down the motorway and immediately radioed in the incident before rushing to the scene. He surveyed the scene, finding many bodies and injured people that he tried to reassure. In the main body of the plane he heard a baby crying and found the injured mother trapped in her seat and frantic about her baby. Collier climbed into the section of the plane and found the baby.

Back at Downing Street, Sutherland was stressing for not grounding all planes but Fraser explained that the plane had already been in the air and was diverted from France.

Rachel took a call from a distressed Ellie who was at the hospital. After the graduation, Ellie and her friend Georgia (Ruby Barker) had been taking drugs and Georgina was now in a coma. Rachel wanted help from Sutherland but he was too busy dealing with the solar crisis and had to reconvene COBRA.

The science team gave an update that their worst fears were about to be realised. The storm was heading their way and it was in the hot south magnetic orientation. Early reports came in that transformers were being destroyed and France and Spain were almost totally blacked out. Sutherland went to brief the palace and said that COBRA would remain active until the crisis was resolved.

At the end of the episode, the solar storm hit the UK and totally knocked all the power out.