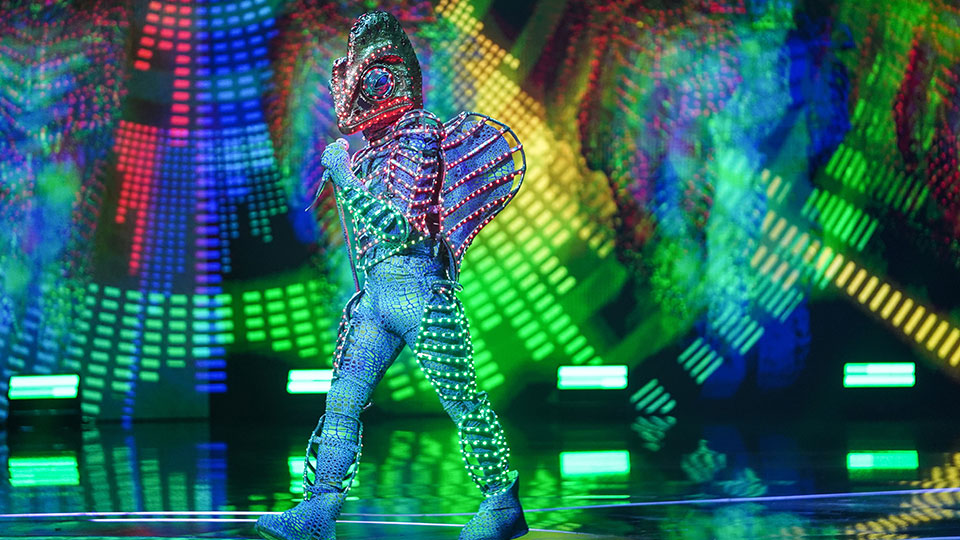 The Masked Singer unveiled its third celebrity last night during the third episode of the series.

Chameleon, who found himself in the bottom two against Duck, was unmasked and revealed to be The Darkness frontman Justin Hawkins. Read our latest predictions to find out who we think the other masked singers are.

Asked how he managed to keep his participation in the show a secret, Justin said, “Keeping secrets is challenging, especially when you effectively disappear for the duration of the filming. I used a combination of bluffery, bare faced lies and vague muttering to explain my absences. I’m basically James Bond.”

During his time on the show his costume has been a talking point with panellist Rita Ora pratically drooling over its tight fit. Justin commented, “I loved my mask and I thought the lights were a brilliant touch. I was lucky to have the freedom to move my limbs around, but I did feel a little exposed in certain key areas.”

The elaborate costumes have been praised by critics and fans but Justin admits that it wasn’t always easy inside his. “The toughest part of the process was learning relatively modern songs. I’m not fond of new music, so I had to force myself to assimilate inferior compositions… Plus it was difficult to sing from within a helmet!”

Discussing why he decided to take part in the show, which has been described as weird and wacky, Justin revealed, “I wanted to take part in something that would be slightly surreal, and the secrecy made it a very exciting. Like having an extra-musical affair. I was reluctant to commit to the recordings because I was supposed to be best man at a wedding in Australia, but it was too good to turn down. Haha!”

Advertisement. Scroll to continue reading.
In this article:Chameleon, Justin Hawkins, The Masked Singer