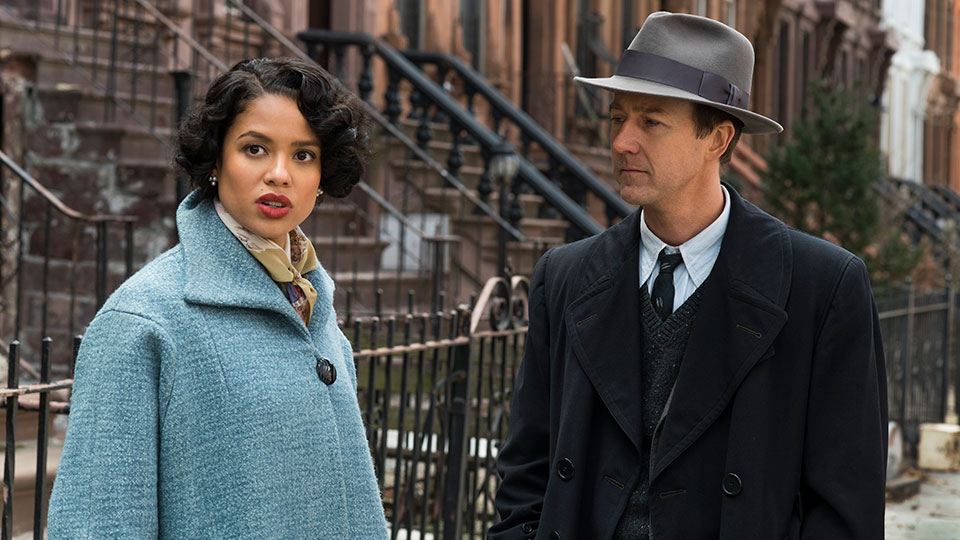 Not many films warrant a two-and-a-half-hour runtime. They have to be engaging, earning each moment to deliver a well-deserved, epic spectacle. Motherless Brooklyn has an epic cast and engaging premise, but it certainly doesn’t warrant the run time. And that’s the first of its problems…

Film noir is a tricky one to get right. Aim at the classics and it can enter into pastiche; aim for an ultra-modern nuanced piece and elements of artifice start to creep in. It’s easy to make off-hand comparisons with Chinatown or invoke the image of a fedora’d detective giving a moody voiceover in monochrome, talking seedy jazz bars and beautiful dames. Both seem pithy and detract from what may be a good film in its own right, but Motherless Brooklyn is neither Chinatown nor a moody musing on downtown shady dealings. It’s somewhere in the middle. Actually, it’s very in the middle.

Edward Norton plays Lionel Essrog, a lonely private detective who doesn’t let Tourette’s syndrome define him or affect his job. After his mentor and only friend is murdered, Lionel obsessively traces clues to solve the case. Scouring the jazz clubs and slums of Brooklyn and Harlem, he uncovers a web of secrets, introducing him to thugs, mass corruption and the most dangerous man in the city.

Right, let’s address it. The length. Long films aren’t an issue, they can be wonderful and detailed and fly-by in an instant. Motherless Brooklyn doesn’t and it’s mainly down to pacing. It’s not an issue when the film begins, throwing a ton of information at you in the opening sequence, and it does allow you to dissect each mysterious thread left in the wake of those events. We’re led on a path of intrigue and have a narrator giving typical noir spiel, which is great. But as soon as the film starts to unravel, the more plodding and convoluted it becomes.

It’s fine to answer questions with questions, but there needs to be more of a hook. It needs to be sharper. There’s a lot of paperwork and, at times, the drag became so heavy it felt as though we were trawling through the archives ourselves. And I don’t think it works as an intellectual piece either, really.

Look, there are aspects of Motherless Brooklyn to admire. The performances are admirable and you’d expect nothing less from a stellar line-up. Gugu Mbatha-Raw is particularly electric and how she interacts with scenery and characters around her is enough to brighten up an otherwise middling story. I can’t speak for Edward Norton’s portrayal of Tourette’s syndrome, having limited experience of the condition, but he ‘sells’ Lionel enough for us to root for him. The cinematography is admirable too, with Dick Pope capturing each node of performance and set with precision and a noir sensibility.

There’s no heft though; nothing at stake. The revelations of the film are ground-shattering, especially since they are (loosely) based on reality, but they inexplicably fall flat in a mire of plodding dialogue, lingering shots and a somewhat confusing score.

I came out feeling flippant, thinking a smug comment like ‘more a Touch of Frost than Touch of Evil’ would be fitting. It’s not. The only conclusion I get is that it aims for lofty modernist heights to avoid being a run-of-the-mill and, in doing so, becomes exactly that. Yes, it’s only Edward Norton’s second outing as a director and he proves a competent one. Yes, the performances are sometimes investing and the images, striking. But it feels artificial and that’s what film comes down to for me. Feeling.
Put it this way, the score is a mixture of noir cuts intertwined with a Thom Yorke-penned moody track for the film, reprising throughout. That has the potential to be great, but it isn’t. It remains as just potential. The reprises of the track feel forced into a tonal piece they don’t fit into. It isn’t bad, it’s just superficial. And that summarises the film: unused potential, favouring artifice and detail over intrigue, suspense and emotion. It’s fine. Nothing more, nothing less.