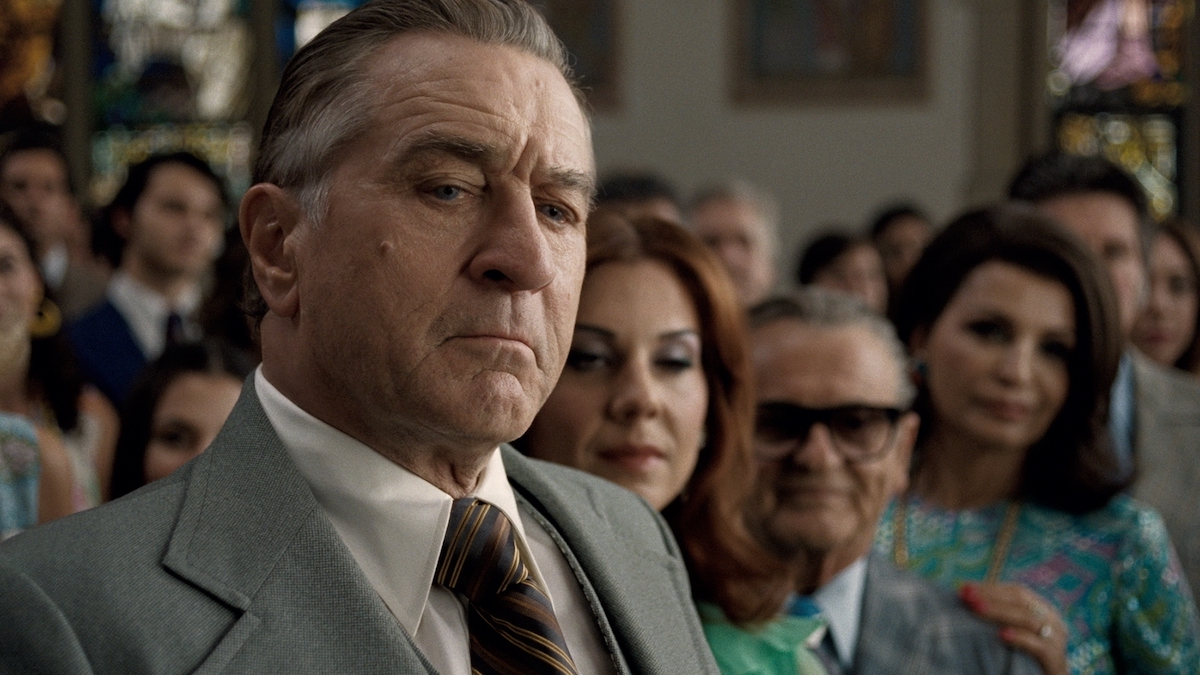 There’s a school of thought in film criticism that Martin Scorsese is guilty of glamourising criminal behaviour through his violent and visually stylized depictions of organised crime. One might suggest that those positing this notion should go back and rewatch the final acts of Mean Streets, Goodfellas, Casino, and The Departed, and this time really pay attention to what happens in those films. Alternatively, they should just watch The Irishman.

Scorsese’s crowning glory, The Irishman is the mob movie his entire career has been building to, and one that perhaps only could have been made by a director in the later years of his life. Gone is the bluster and swagger of those young wiseguys like Johnny Boy and Henry Hill, replaced instead with an elegiac and sombre reflection of what a life dedicated to “this thing of ours” really costs. Spanning decades, The Irishman captures the mob at the height of their power and influence in America, and then shows us how it all came crashing down. In the final scenes, Scorsese gives us arguably the most haunting and sorrowful frames of cinema he has ever depicted.

The titular Irishman is Frank Sheeran (Robert De Niro), a union organiser and truck driver in the 1950s, who starts working for Philadelphia mob boss Russell Bufalino (Joe Pesci). He gets in a little too deep with the head of the family (Harvey Keitel) and soon finds himself doing extra jobs including ‘painting houses’—mob lingo for contract hits.

His expertise at house painting leads him to Jimmy Hoffa (Al Pacino), the president of the Teamsters union, who has a few problems that a man of Frank’s skillset can help him with. Told slowly and methodically, the film evolves into the personal story of Jimmy and Frank’s friendship over many years, the close bond between their families, Hoffa’s feud with fast-rising wiseguy Tony Provenzano (Stephen Graham), and their conflicting loyalties to the Union and to the ‘family’.

Scorsese tells this story—across a stately 209 minutes—over three distinct timelines. There is Frank in the not quite present day (early 2000s) as a wheelchair bound geriatric, reminiscing on the past and narrating his story to the viewer. There is a road trip to a family wedding in 1975, with Frank and Russell and their respective wives, which runs like an artery through the heart of the narrative. Finally, there is the flashback, which accounts for the majority of the film, covering events in Frank’s life from 1949 onwards.

The final hour of The Irishman is nothing short of sensational, as the fates of Frank and Jimmy inexorably wind to their natural conclusion. The flashback catches up to the 1975 timeline, and the true purpose of the wedding road trip comes into focus. I realise I am in danger of tripping over into Scorsese fanboy territory here, but I don’t care, it is majestic. Cinematic storytelling at its most awe inspiring.

Both epic and intimate, The Irishman is an astonishing feat of filmmaking. A perfect companion piece to his earlier crime films—especially Casino, which could almost be a sequel to this—it perhaps most comfortably sits alongside Silence, Scorsese’s other late career masterpiece, in its meditative contemplations on guilt, morality, and mortality.

So, what of the much-debated cutting-edge visual effects? Well, for the most part it is incredible. A little distracting in the early parts of the film, but the story is so engaging you quickly get over it. The flaw in the system however, is that no matter how many wrinkles and grey hairs you remove, you can’t make a 77-year-old man walk and talk like a 30-year old.

De Niro, Pacino, and Pesci are all old men now. They talk like old men. They move like old men. Nowhere is this better exemplified than in the much-maligned scene of Frank exacting brutal vengeance on a shopkeeper. He’s supposed to be in the prime of life, and the scene should be reminiscent of Henry pistol whipping his neighbour in Goodfellas, but instead he looks like an arthritic pensioner struggling to step off a curb.

You go with it though, because the performances are incredible. After years of taking roles in films that were undeserving of their greatness, it is a profound joy to see De Niro and Pacino reminding us of why they are held in such high esteem. They are magnificent. But perhaps the greatest joy of the film is seeing Joe Pesci come out of acting retirement, and play completely against the usual mob movie motormouth psycho type he is associated with. His Russell Bufalino is a quiet, still, chairman of the board sort of gangster. The Oscar nomination was well deserved.

Elsewhere in the cast, there are tremendous turns from familiar faces everywhere you look. The standouts though are Stephen Graham as hot-headed New Jersey wiseguy ‘Tony Pro’, who has two of the film’s best scenes in his confrontations with Hoffa, and Anna Paquin as Peggy Sheeran, Frank’s daughter. With barely any lines of dialogue (sparking much furious online debate) her silent, withering judgement of her terrifying father and the men he associates with is the moral anchor of the film.

Okay, but why am I forking out £25 for something readily available on Netflix. Well, this being a Criterion Collection release, you don’t only get the film newly remastered in 4K (which you will actually own), you also get the collectible booklet, the beautiful artwork, and a tremendous selection of supplementary features.

First up is Making The Irishman, a 36-minute behind the scenes documentary made exclusively for this release. It features interviews with Scorsese, the main cast and crew, and Charles Brandt, the author of I Heard You Paint Houses, the book on which the film is based. This is all intercut with footage from the set as they were making the film.

The Round Table discussion between Scorsese, De Niro, Pacino, and Pesci is terrific. A 20-minute conversation, recollecting how they all met, and the films they first saw each other in, and how their careers connected through their work with De Palma and Coppola. Lovely stuff all round. Highlights include an amazing anecdote about filming Pacino’s first scene on the film, the magnificent moustache Pesci is sporting throughout the interview, and the remarkable fact that The Irishman marks the first time that Scorsese and Pacino ever worked together.

Gangster’s Requiem is a video essay from Farran Smith Nehme. The video is a critical analysis of The Irishman in the context of Scorsese’s stylistic methods, and the wider context of his movies about organised crime. Next up is Anatomy a Scene, which shows us the sequence where Frank is honoured by the Union, with a commentary track from Scorsese.

The Evolution of Digital De-Aging is a program produced by Netflix which takes a deep dive into the work Industrial Light and Magic (ILM) did to create the young versions of the characters. This is incredible, cutting-edge technology. One of the most interesting elements is that Scorsese dismissed the traditional performance capture method of using active optical markers (the little dots) on the actor’s faces, as he thought it would get in the way of the performances.

Finally, there are archival interview excerpts with the real Frank Sheeran being interviewed by Charles Brandt, and footage of Jimmy Hoffa from a TV documentary.