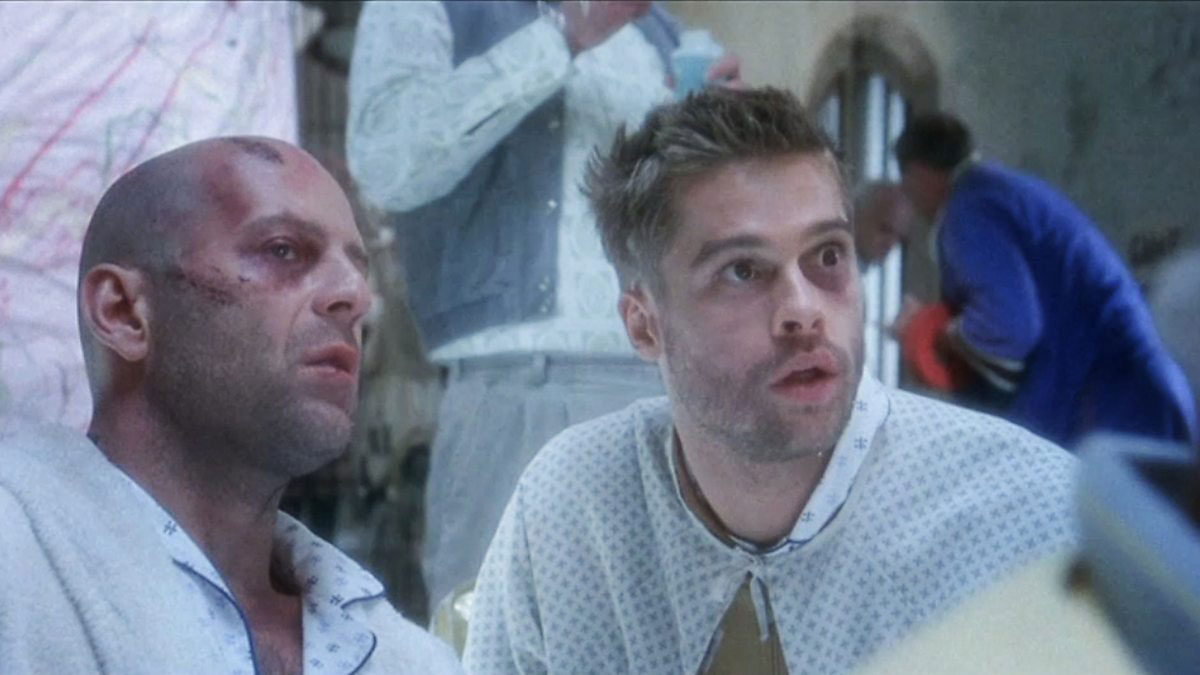 Convict James Cole (Bruce Willis) is offered parole if he agrees to be sent back in time to stop a devastating pandemic from wiping out most of Earth’s population. Accidentally sent back to 1990, six years before the virus outbreak, Cole meets scientist Dr. Kathryn Railly (Madeleine Stowe) and Jeffrey Goines (Brad Pitt), the mad son of a virologist (Christopher Plummer) when he’s imprisoned in a psychiatric facility due to his warnings about the impending outbreak. Those connections prove important when Cole eventually lands in 1996 to carry out his intended mission.

‘Twelve Monkey’s is a high-concept, and eerily prescient, sci-fi classic from Monty Python member Terry Gilliam. Based on the French short ‘La Jetée’, the film celebrates its 25th anniversary this year and draws more than a few parallels to the strange times we’re living in thanks to the ongoing global pandemic. On its original release the film was a critical and commercial success, with Brad Pitt picking up a Best Actor in a Supporting Role nomination, and it’s gone on to considered a classic of the genre.

I admit, I was excited to rewatch the film having only seen it once back in the 90s and I remember enjoying it immensely. Some things were as I remembered; the film is a bit of a head scratcher at times and Brad Pitt really is excellent in his role as Jeffrey, proving that there was much more to him than just his good looks and physique. From a visual perspective the film looks fantastic and it’s stood up to the test of time well. Gilliam’s flair as a director brings the film’s world to life very vividly and the aesthetic is one of the strongest aspects.

What didn’t quite hang together as well was the storyline. Perhaps it was my youthful outlook at the time but ‘Twelve Monkeys’ wasn’t anything like as gripping as I recall it being. That’s not to say it’s a bad film, it’s not, it’s just not as strong a narrative as I’d previously thought. Certain events happen in the movie with little explanation as to why and the mixture of flash-forwards and time travel makes it hard to follow at times. The other thing that surprised me is just how bland Bruce Willis is as Cole. He’s acted off the screen by Pitt and Madeleine Stowe also gives a more interesting performance as Kathryn.

The film isn’t without its moments though. The scenes in the institution are fantastic and the pace picks up once Cole arrives in 1996 and takes Kathryn as his hostage to help him achieve his mission. The mysterious flash forward that’s glimpsed at throughout gives a decent pay off and there’s plenty of action too.

Extras on the disc include a feature-length documentary ‘The Hamster Factor and Other Tales of the Twelve Monkeys’ and the DVD comes packaged with a ‘Twelve Monkeys’ face mask.

‘Twelve Monkeys’ is a solid sci-fi thriller and it is worth checking out, just for me it wasn’t as good as I remember it being. There are lots of ideas here, some of which could have been fleshed out more, and the film would have benefitted from being a bit tighter structurally. To be honest though, it’s worth watching for Brad Pitt’s performance alone as he steals every scene he’s in and he’s the actor you’ll remember long after you’ve seen the film.