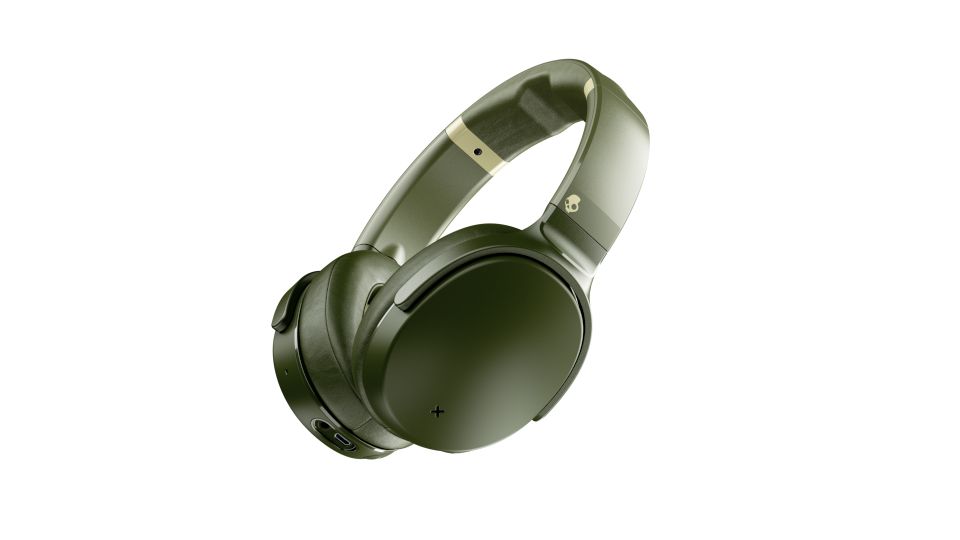 Skullcandy have been making headphones since 2003 and their products have gained the attention of outdoor/extreme sports enthusiasts around the globe. Skullcandy products often feature designs that appeal to a slightly younger market. Their products certainly deliver on the fashion front but can they back this up with sound quality? We’ve been given a pair of Venue Noise Cancelling Wireless Headphones to put to the test.

Out of the box, the Venue appears to be a lot more grown-up than other Skullcandy products. There is hardly any branding at all and there is a complete absence of any garish graphics. The set we have is olive green and they are a uniform colour across the entire headphone with a few accents of a lighter green.

The Venue controls are placed on the rear of each earcup, on the left you have the power and ANC (Auto Noise Cancelling) buttons and on the right, you’ll find the volume controls which double up as skip track, pause and play. Also on the right are the micro USB charging port and 3.5mm jack in case you wanted to use them with a wire. The controls are responsive and once you’ve got used to where they are you won’t have any trouble using them on the move.

In terms of comfort, they perform reasonably well. They are very light to wear and the earcups fit snugly. The earcups are coated in faux leather which is fine for the most part but I can imagine them getting very sweaty on a hot day or at the gym. I also have an issue with the tightness of the clamp. This might be down to the size of my head, I’m quite a big fella, but I found the clamp to be overly tight to the point where it would bunch up my skin around my temples. For myself at least, prolonged use started to become uncomfortable. My wife, however, who is much smaller, was wearing them and didn’t experience the same issues.

The noise-cancelling works really well and I could happily switch off from the world when wearing the Venue, noise-cancelling can be switched off with the touch of a button allowing you to hear what’s going on around you without having to take them off. They also come with support for Google Assistant and Siri which worked well enough although I had to launch Siri manually on my phone rather than being able to say hey Siri and have the Venue pick this up. I also found that during phonecalls I was unable to hear the person on the other end and had to resort to using my phone without the Venue.

Battery life is impressive and sits at a massive 24 hours and you can get five hours worth of battery from just a ten-minute charge. If you run out of juice completely you can always revert to the 3.5mm cable that comes in the box.

Possibly the best feature of the Venue is that it comes with Tile technology built-in. Tile creates Bluetooth tracker tags allowing you to check on their location via the Tile app. If you’re prone to losing your headphones then this feature could prove invaluable to you.

Quite often, Skullcandy products tend towards a bass-heavy sound profile. Whilst there is certainly a degree of this, it isn’t as overpowering as other Skullcandy models (the Skull Crusher to name an example) and the sound is reasonably balanced though there is still a tendency for a bass-heavy mix. I did find that at maximum volume there would be a lot of distortion at the bottom end.

Despite this bottom end bias I actually liked the sound quality of the Venue. All sounds were crisp and when combined with the noise-cancelling I could happily escape the noise my young child makes around the house without having to turn the volume up to eleven.

Overall, the Skullcandy Venue are a nice set of headphones. They certainly won’t have companies like Bose concerned but then neither do they cost the same as higher-end headphones. They are comfortable to wear (provided your head isn’t as big as mine!) and the sound quality is of a decent level even with the bias towards to bottom end. I wish they had worked better with my phone so that I could make or receive a phone call without having to remove them, this alone would have given them extra marks in my review score. I also like the ease of use and integrated Tile technology is a fantastic bonus to have.

You should expect to pay around £120 for a set of Skullcandy Venue headphones and they are available at Amazon UK now.