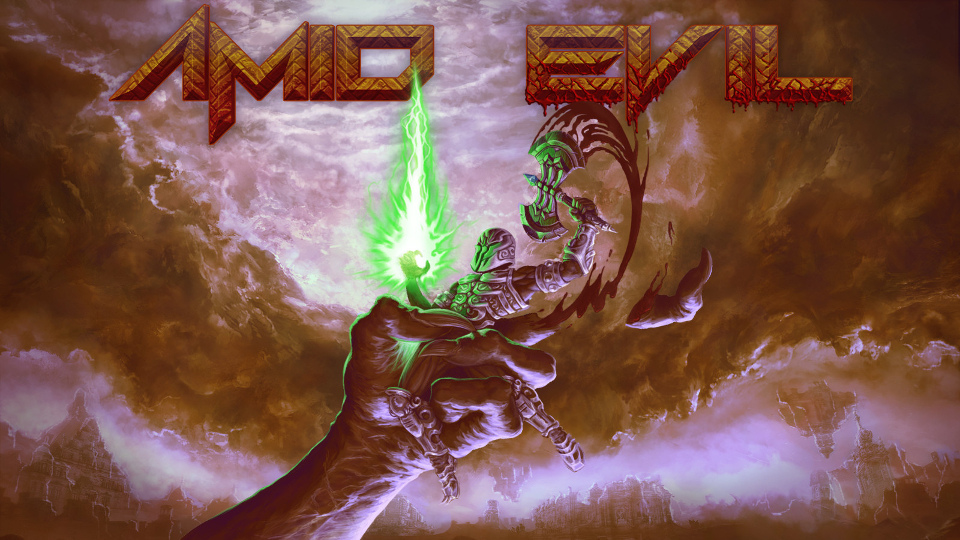 If you’ve looked at Amid Evil and thought, ‘that looks a bit like Hexen’, you wouldn’t be wrong. In its own right, Hexen has a rose-tinted place in our hearts as 90s FPS fans, but there’s no ignoring that it could have been done better. Cue the mind reading, because that’s exactly what Indefatigable and New Blood Interactive have achieved here, along with tipping a respectful hat to games like Quake, Doom and Unreal–the titles that launched a thousand copycats. Amid Evil isn’t one of these, however, and manages to brutally trailblaze a path of its own in the FPS Hall of Fame.

Watch the Amid Evil launch trailer below:

The plot is simple: you’re the Champion that’s going to defeat an already defeated world. You’re going to reclaim the ancient lands through blood and blade, taking absolutely no prisoners along the way. It’s not terribly deeper than that, as it doesn’t have to be. You are a vessel of revenge–a juggernaut of brute force, and you will come out on top living up to your title, or die trying.

Moving around instantly brought back memories of my Unreal days. All those sleepless nights, especially in the tournament areas. I’m almost sure that my fingers fused to the keyboard from constantly strafing–something that you will learn to live by in Amid Evil. Strafing, jumping and generally getting the best of the enemy at hand by outmaneuvering them with fancy footwork. Don’t worry though, it’ll become second nature, and when strafing starts to show up in your dreams at night, you’ll know you’re doing it right.

The weapon set in Amid Evil is absolutely delicious. Almost every weapon runs on a mana system instead of gun-shaped ammo. You’ll pick up vanquished souls to fill the meters, which, depending on the weapon itself, can have a different type of mana colour to fuel it. Collect enough and you’re ready to set yourself into an overdrive that’s going to leave a red mist behind–this can be used manually, or toggled in the option menu to automatically trigger when ready. Either way, it gives the player the freedom to work a play style around it to their sole benefit. The weapons themselves are also a sight to behold.

The starting weapon, the Axe of the Black Labyrinth has to be one of my favourite melee weapons of ALL TIME. This insane piece of cursed smithery works on sheer hate, pulling enemies TO IT. No lightweight either–this thing will destroy with a crushing and satisfying blow, with the Soul Mode (the powerup mentioned before) being a meat grinding death machine. There is also a homing staff, Whisper’s Edge that throws frisbees of death and the Celestial Claw: a staff that PULLS planets out of the Universe and launches them with the power of a rocket. I could seriously sit here all day and think about them all with Dream Weaver playing in the background, but then I wouldn’t be playing Amid Evil. And that’s a problem.

View some Amid Evil screenshots in our gallery:

As you’re strafing and leaping, dismembering and obliterating, you’ll be making your way through seven different episodes, all of which look and feel distinctly different. The hybrid of low-poly and Unreal Engine 4 will pluck at your retro heartstrings, whilst harnessing modern technology for the better; lighting and textures that are fantastically done–with the jagged polygons of enemies running around within it. There is no chance of Unreal Engine ruining your immersion into the retro FPS era either–New Blood Interactive has seemingly mastered the art of meshing the two together for something gloriously updated, yet feels like it could have come out in 1993.

It’s mean, and makes no apologies about that fact. Amid Evil is a true guilty pleasure that now has a spot amongst some of the greats. It takes everything you loved about the old and marries it with the new in a union that’s completely irresistible if you’re a fan of the genre. Being the Champion is no small task though, so you had better be ready to have a bloody good time.

Amid Evil was reviewed using a digital code provided by the publisher.