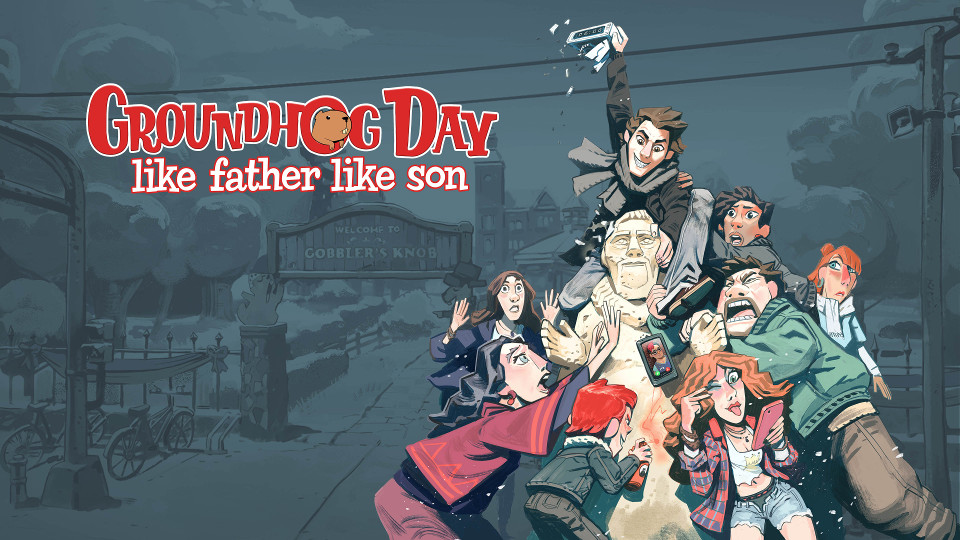 So it’s been a good, 14 years, since I watched Groundhog Day. The ever-lovable Bill Murray was great, playing a man forced to relive the same day over and over. The film used this 24 hour window brilliantly and in a video game format? Well, let’s see how Tequila Works did.

You play as Phil Connors Jr, the son of the protagonist of the movie. To escape the shadow of his father, he escaped Punxsutawney to become a famous vlogger. Unfortunately for him, his past drags him back to his home and right in the arms of his family. This is where he finds he is stuck in a daily loop, much like his father.

Right out of the gate I was a little put off with the tone. The film was very family friendly but this adaptation clearly caters to adults. Foul language is abundant and it was strange to get accustomed to. The plot itself is pretty thin but the game has a keen focus on its cast. As you repeat the days you find your goal is to help the people around you and right the wrongs of the past. I wasn’t expecting a deep plot so I wasn’t disappointed.

I didn’t touch on it in the story segment but the interactions with the cast is a big part of gameplay. You are an observer of scenes, watching how they play out and having conversations with characters that might not go anywhere. Your goal is to learn about people and when you reset the day, you use that information to your advantage. This was an excellent gameplay system that made me eager to get to the next day. To get people to open up, you have to complete little tasks for them. These are all simple tasks on the surface but might not be possible to complete in a single day. Resetting the day gives you a sense of focus. Phil gets better at tasks, as his father did in the film. It carries over from the movie perfectly.

These mini tasks aren’t exactly exciting, they use the Move controllers well enough but, again, they aren’t great. They serve their job of getting you to the more interesting moments well enough though. To keep track of what you know, you have a handy tablet. Tequila Works understands this game is repetitive by design but does a great job of allowing you to skip lengthy tasks you’ve already done. Locomotion is done through teleportation but you can only teleport to select locations in a scene, you lose the sense of exploration even though you could argue it makes you feel grounded. Grounded is a word I’d use to describe the game. You don’t do anything especially big but getting to know the cast and help them through their day is surprisingly enjoyable.

The art design gave me heavy Leisure Suit Larry vibes. The cartoony visuals look good enough but the character models take some getting used to. They have the body proportions of Larry but with a more polygonal shape to them. It’s weird but I got used to it quickly. The soundtrack was good enough, I don’t recall if the original score was utilised but the game score was fine. Voice acting was good across the board and the writing was pretty great. Not counting the strange choice in profanity, the game balances its themes very well.

A sequel to Groundhog Day is odd, even so a video game sequel and even more so a VR-only sequel but it works. The cast are interesting and it uses the universe well. I don’t think it needed to be in VR but it’s fine that it is. I would have preferred a better dialogue system, over a collection of “mini-games” but what we get is good. It’s well written and at only 5 hours long, doesn’t outstay it’s welcome. It’s also important to note, you’ll need Move controllers for PSVR.