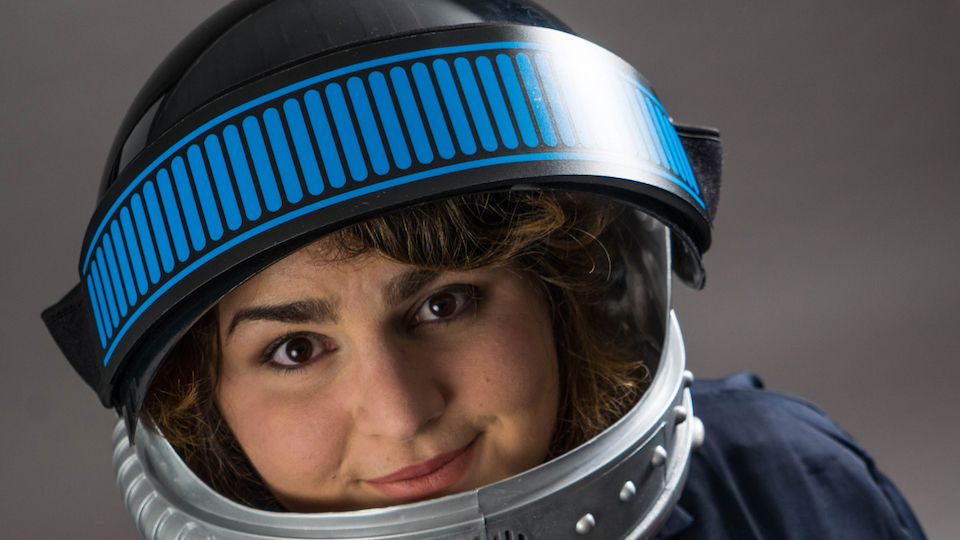 The Great Emptiness is the real-life story of 2018 BBC New Comedy Award finalist Isa Bonachera and her quest to go to space. Isa provides a thought-provoking and unapologetically dark hour of offbeat comedy about the universe and her broken dreams. Isa’s stage persona is immensely likeable, her focus is self-effacing in that she doesn’t actually want this show to be all about her experiences – she wants us to learn, discover and explore the themes she’s talking us through. She works hard to set the scene – dressed in a full jump suit, a space helmet and shimmering silver gloves – and manages to maintain our concentration levels in a very hot venue with the aid of several fun projections and a voice synthesizer to add an extra layer to her occasionally warped point of view.

Isa Bonachera explores the blurred lines between ambition and delusion as she shows the extreme lengths we will go to achieve our aspirations. For Isa, this included building her own Mars Rover, and being involved in some of the major scientific milestones of this century while working at the Large Hadron Collider and the European Space Agency.

The Great Emptiness asks us to contemplate the dark matter in the universe which cannot be detected, and yet we know is there. Much like Isa’s punch lines which we cannot easily see coming. Isa possesses a very refreshing, cheeky flair for delivering a line which knocks you off guard and delivering some facts – and fiction in the name of comedy – in order to get us thinking. We find ourselves contemplating whether we should like dolphins, ducks or even pubic lice. We consider the subtle differences between plots to 90s movies Armageddon and Deep Impact (yes, they’re so subtle that you simply can’t spot them). We are above all won over by Isa’s unique take on our planet and what lies beyond. It may be so that Isa spent many years with her attention pointed towards the stars but, now a career in comedy has become her new goal, I’m sure there’s plenty more stars ahead in her future.