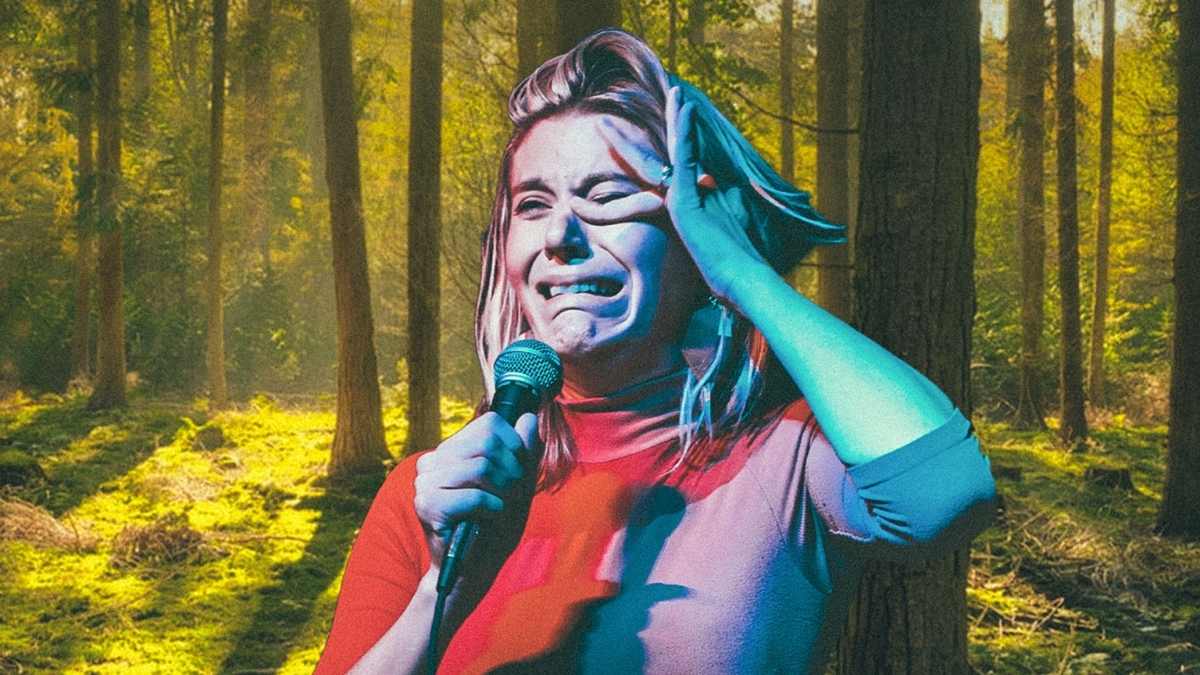 Hannah Pilkes - Woman On The Verge

Hannah Pilkes is a Philadelphia born and raised comedian and actor who splits her time between Los Angeles and New York.

She has been featured on HBO’s Search Party, Prime’s Yearly Departed and the CW’s Would I Lie To You. She has also racked up 3.6 million likes on TikTok for her character driven comedy.

‘A Woman On The Verge’ is her solo debut at the Edinburgh Festival Fringe. Billed as a physical an interactive character comedy show that uses clowning and storytelling to explore ego, financial instability, inner chaos on our attempts to appear palatable, Hannah has created an hour of absurdity.

While covering the pitfalls of having a meltdown, she is keen to redefine the fine line between having a breakdown and a breakthrough, a fascinating place to kick of live comedy after a two-year hiatus. She says:

“I wanted to create characters that bring joy that you gravitate towards too. Woman On The Verge is about teetering on the edge. It’s the space we all occupy and I’m exploring when this can be a good thing. For example, having a breakthrough. The show is about perpetual chaos.”

The show contains an hilarious collection of characters that guide us along the shaky precipice of the verge, where we intermittently see Hannah trying to prepare for her show.

“The overarching premise is me trying to start my show however I’ve, over committed and there is a delay to getting the show started.”

“Sometimes we’re afraid of what we’ll experience when we are on the verge and I’ve tried to create a safe environment to occupy a manic space.”

“The show is immersive, requires audience engagement and its success depends as much on you as on me.”

“How do we look at this space and make it silly? What does it mean to be on the edge? We know the corporate world is full of buzz words like mindfulness and synergy. It’s my reality of being an endless people pleaser.”

“Even during the pandemic I’d over-committed myself to friends on Zoom and felt like I was disappointing people I couldn’t dial into the video calls I had accepted.”

“It comes back to an inability to check in with yourself. I really want the show to be a seamless experience where I take on different roles and the audience Get a fully immersive experience.”

“Audiences may even connect with their inner child as there is a theme of make believe and we build something together in real time.”

“No two shows at the same. – it isn’t preaching, and it doesn’t try to alienate people. In fact quite the opposite,  it seeks it seeks to the positive and a sense of optimism.”

One of the flagship motifs of the show is Hannah, crying after a catastrophic end to an intermediate hip-hop dance class, which includes shaky hands. Hannah tells more about how this came about IRL:

“I was crying at home and I caught myself in the mirror and my hands were shaking near my face. I realised then how silly and funny you can look when you are extremely stressed. I began to explore this more and I’ve had feedback from other comedians including Natalie Palamides who told me to ‘go for it’ and to see how far I could take it.”

On returning to the Edinburgh Festival Fringe with a fully-fledged solo show and producer, Hannah is looking forward to the return of live comedy. She says:

“There is nothing like the visceral experience of performing to a live audience of going through the show together. I also love watching live comedy as you get to see how thousands of people’s brains ticket festival like the Edinburgh Festival Fringe. Maybe I’ll see lots of perspectives on climate change – I may think that some resonate, and some don’t -It’s the ultimate art form and a really effective way to share art and ideas.”

“Alternative comedy nights like Stamptown were really formative in helping me to develop my work, allowing me to explore the space between character comedy and stand up”.