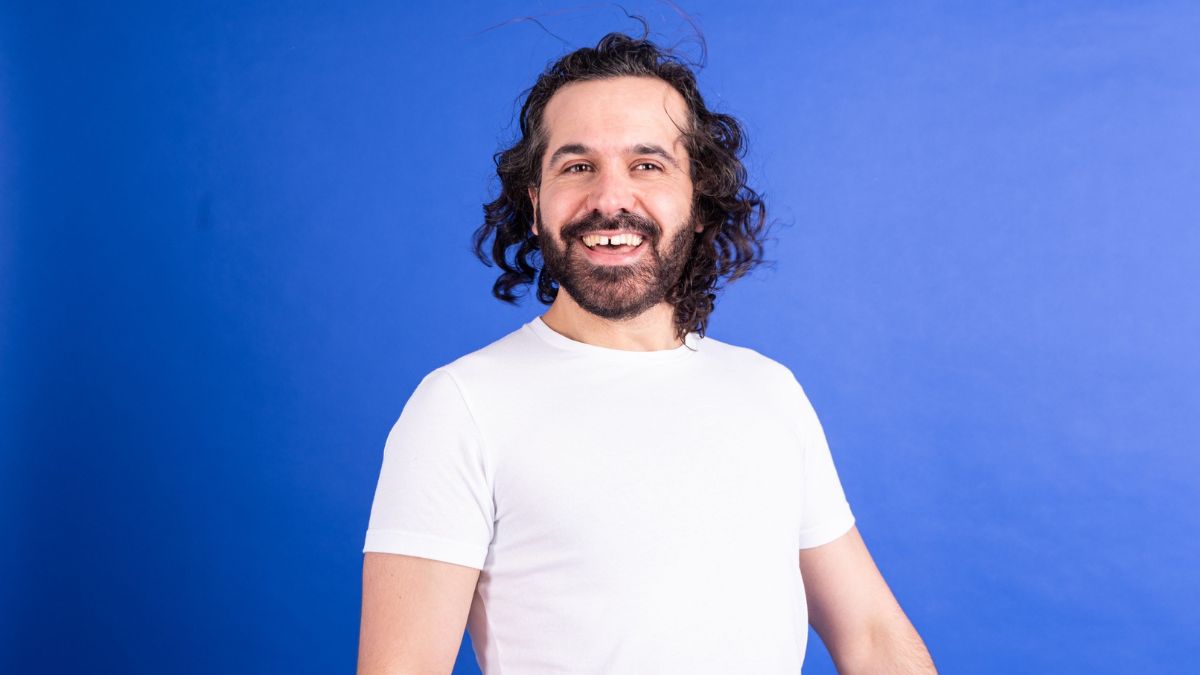 Character clown Sami Abu-Wardeh has taken a highly personalised approach to his debut solo show ‘Bedu’ backed by the Soho Theatre to give British audiences permission to laugh at complex issues that touch on the clown confronting his own identity in the UK by exploring his father’s story, a Palestinian refugee.

A seasoned character clown, Sami thrives in creating hilarious and ridiculous characters that engage the audience in the universality of being as silly as possible.

His debut show, ‘Bedu’, which centres around a Palestinian refugee who finds his dead body steals his passport and comes to the UK on a cruise ship offers on empowering route to discussions of his own identity. On ‘why now’, Sami says:

“The reason I’m addressing my own identity now as a character clown is that if I don’t a void is created that could be filled with the wrong assumptions. If I don’t explore this myself, it’s only a matter of sooner rather than later that my exploring my identity will come up, and my comedy must be a vehicle to explore this.”

On developing the show, Sami says:

“Clowning is the only thing I’m good at, it has limitless possibilities to make people laugh.”

“I initially developed a character that was already semi in development as a silent clown. But he then became a character fully fledged speaking character, who is who has my name, who is a Palestinian refugee who has come to the UK. It was a funny journey developing that character as your average theatre go-ers are white middle British people.”

“The biggest challenge was giving them permission, finding ways through the writing to give them permission to laugh. This was one of the goals for my debut show and I’m very, very happy with what I’ve made.”

“I found that by making a clown that was an immigrant cleaner, it was a challenge to give people in this country permission to laugh without having to expand on it. I basically had to give a character that was originally a silent clown a voice.”

“I started thinking about my identity and my heritage and my father’s identity and how he’s part of a Bedouin tribe in Palestine, which has a very complicated story with statehood and authority in that the states are actively trying to settle Bedouins to create citizens out of them, which in many ways, against their way of life.”

“I realised that I wanted to explore this – it’s such a rich stream of things to draw from and sort of pertinent issues.”

Sami presents a lot of different ideas at the same time through his performance, through creating a surreal collection of characters from a sauna attendant to a flamenco guitarist that he hopes will both challenge and give permission to UK audiences to laugh.

“The real engine of the show is character clowning.”

“With clowning, you aren’t restricted to standing on a stage with a mic. You can walk into the audience and get them to feed you. There are limitless possibilities to make people laugh people laugh. Making people laugh isn’t just sitting down with a pen and paper and writing jokes.”

“I began creating a new version of the show post pandemic. It’s a silly character show, but it’s being presented by this Palestinian refugee who has my name, and it’s a story about heat how he basically found me dead and stole my passport and came to the UK on a stolen passport.”

But having said all that, it’s an hour of chaotic character clowning, full of audience engagement – it’s not the type of theatre where there’s the gentle nods of heads. It’s more chuck tomatoes in my mouth and tell me what silly dance you want me to do.”

Confronting the reaction of the comedy industry to the Black Lives Matter movement and demands for racial equity in society since 2020, Sami is passionate about proactively sharing what it feels like, as a person of colour and character comic, to be approached based on your ethnicity and identity to be included in comedy gig line-ups. He says:

“We are in a time now where people need to know who you are to understand where your voice is coming from with judgement as to whether your voice is legitimate. So, I found myself having to suddenly talk about my own identity as a character comic, and the whole nature of character comedy is not being yourself.”

“So, it was quite difficult, and a lot of international comics have this issue. I think what compounds the issue for me is I speak with a broad sort of southern English accent, which really doesn’t align with who I am. I didn’t grow up in this country.”

“I was born in Kuwait, I have lived around the world, mostly in the UAE where we lost all our assets in the Gulf War and were basically made refugees, but even though I was born in Kuwait, I was very lucky to be born with British citizenship had I not been wandering decisions ever would have been a very different, different situation.”

“My background is a very complicated and my show deals with that, as well as the fact that you can learn how to change how you present.”

A personal journey, Sami’s debut hour has allowed him to explore the context of his work, who he performs to, and the response he gets. He says:

“A lot of the show and the way it was written, is a conversation between me my identity and the place I’m in and the identity of your majority ‘comedy going’ audiences.”

“If I had written this show in another country, let’s say in an Arab country, it would look very different in that. There would be things that I wouldn’t need to do. So, the structure and the rest of the show itself is a reflection of the country we’re in. And this isn’t anything negative. I’m just acknowledging the origin of it and where it stands in the context of this country’s audiences. A lot of a lot of comics not being brought up in the UK are in a tricky position.”

Sami says this exploration of his mixed heritage has led to an empowering realisation: that it is OK to embrace both of his identities.

“Doing this show has given me an opportunity to talk about it. It’s been equal measures of scary and empowering. Genuinely, the process of making this show and dealing with issues around my own identity has been a very personal journey for me.”

“It has been about finding out how to give people that permission to laugh and really, really being honest with myself about who I am.”

“I’ve never used comedy like this, for me. Comedy has always been an expression of silliness.”

“My gold standard in my work is how can I create something that is purely in the moment that will never happen again, that has people doubled over with laughter while simultaneously saying ‘I can’t believe this person is doing this’.”