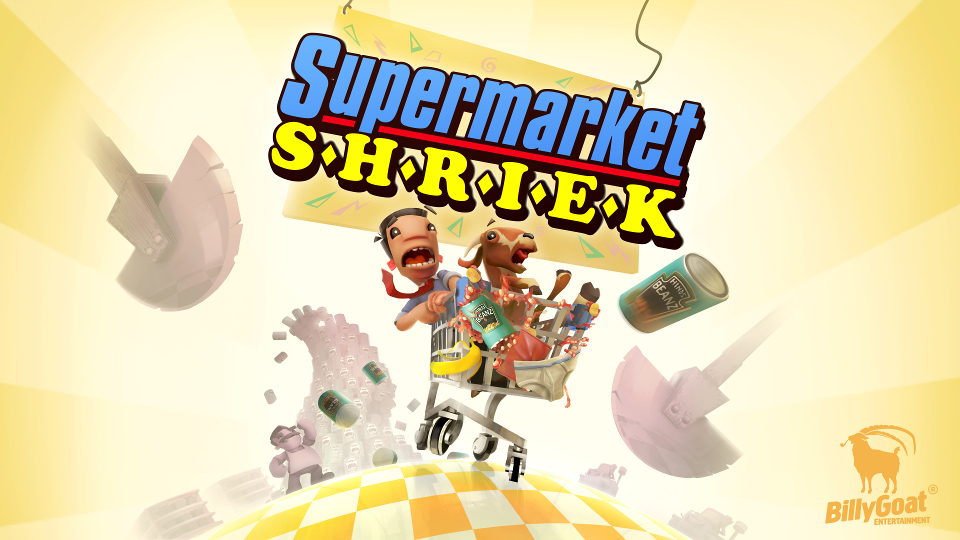 Wild and crazy is an understatement here as Billy Goat Entertainment brings us Supermarket Shriek: an outrageous course racer where you navigate by shouting like a mad fruit through well-stocked grocery aisles. You absolutely read that right. Shouting propels, and steers you though this zany gauntlet running game.

It took me a good long minute to fight the urge to gun it through every course. It’s very tempting to hold down both triggers and really give the shopping trolley the beans, but what you’ll find are the rules change throughout. It’s not just about blazing through, or cutting a mean corner–you will come up against obstacles in every sense of the word.

The gauntlets created by Billy Goat Entertainment are so hilariously tricky with a heaping portion of painful on the side. Pits of fire lining your path, walls that push you happily into a fated restart, trick floor tiles–you’ll be shouting through the gamut like a mad old fruit, trying to dodge everything with Lara Croft precision. Don’t be afraid to take it slow at times either! The clock ticks in the background, breathing down both of your necks (don’t forget there’s two of us driving this crazy cart around!), but some courses will demand a slower execution, especially if you shout wildly like I do through the blighters.

The controls really amp up the madness and turn that sucker up to eleven (It’s one louder!). No steering on the D-pad or analog sticks! No siree! You’ll be using both triggers on the Xbox controller to paddle this nonsense kayak around the silly bay. Hold down a trigger and it makes either your goat or your man YELL. The more they shout the more momentum you give your grocery-getter, controlling separately and effectively, two halves of a whole brain. Certainly a lot easier than it sounds…or maybe that doesn’t sound easy at all. I hope you’re enjoying this wonderfully controlled madness, because multiplayer is a whole new rodeo, partner.

View some Supermarket Shriek screenshots in our gallery:

You thought controlling that wild trolley was a challenge with just you, eh? Well, now it’s time for multiplayer and a test of your friendship and trust to whomever dares pick up the second controller. Instead of fighting with your own brain to manage left and right separately, you’ll now have the distinct pleasure of what I like to call ‘struggling cooperation’. Player one will have the reigns of the man, and player two, the goat–which means you’ll be separately piloting directions, hoping to move in tandem. In a party setting, this will no doubt be a winner and bring loads of laughs, as it’s not really meant to get you to cross the finish line, but have a goofy ride around frantically shouting directions to your multiplayer partner. Hats off to you if you’ve and your plus one have managed to progress in any respect though! I’d be willing to bet on top of being good at multiplayer Supermarket Shriek, that you’re holding a world championship cup for three-legged races somewhere.

Available on Xbox Game Pass for Xbox One, it’s an easy download if you have the service and more than worth giving it a try. Silly fun, challenging and competitive courses and pretty easy on the eyes–my eight year old is absolutely falling over themselves enjoying how ridiculous the whole of Supermarket Shriek is. Me, on the other hand–playing for too long hashes up flashbacks of my controller-throwing days. Good luck to you and your patience and whatever friendship you choose to put on the line for the glory of multiplayer–you’re going to need it!

Supermarket Shriek was reviewed using a digital code supplied by the publisher.