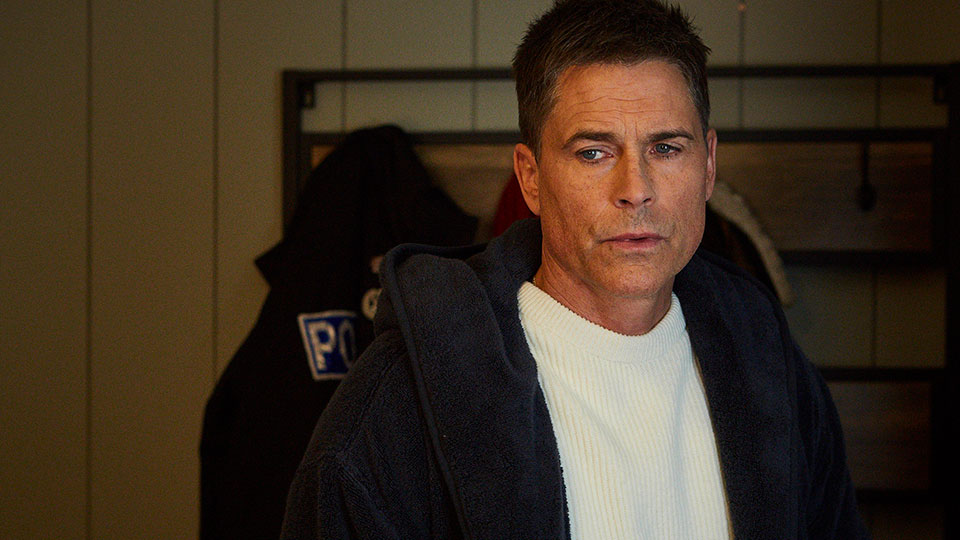 It appeared that someone was targeting the Boston pensioners on the latest episode of Wild Bill.

A rainy day gave way to the news that Bill (Rob Lowe) was proposing to make some redundancies in the team. Muriel (Bronwyn James) found a list stuck up on the wall in the toilets, which she looked at with Lydia (Anjli Mohindra).

Sean (Anthony Flanagan) and PC Drakes (Divian Ladwa) attended the address of a man named Ralph but when they entered the house they couldn’t find him. Taking a look around the house, Sean surmised that the old man had been robbed and Drakes found a door broken open at the back of the house. They also discovered a glove in the garden.

Bill was greeted at his front door by Lisa Cranston (Angela Griffin) who was asking him about the proposed redundancies. Frustrated that the information had leaked, Bill refused to speak to Lisa when she started firing questions at him and he closed the door in her face.

Sean briefed Muriel about the robbery and they were interrupted by Bill. Muriel asked Bill about the redundancies and he told her they were final yet and would take weeks. Not the comforting news she’d hoped for.

Bill called Lisa to a Boston Pensioners event and she accused him of cutting jobs to fund a super computer. He tried to spin the story more positively and left Lisa in the village hall when Muriel called him saying they had a partial match in the robbery case for someone that works in the library.

Arriving at the library, Bill was greeted by a librarian with a hangover. She turned out to be Alma Smith (Emma D’Arcy) the person he was looking for, the daughter of the man suspected in the robbery, and she told Bill she hadn’t seen him for a long time.

Muriel and Sean were investigating the crime scene when Sean unfurled a carpet in the shed and found the body of Ralph inside of it.

Lydia hauled Bill over the coals for the way he was handling the case and his failure to use his computer to correctly identify the killer made the front of the newspaper.

Muriel took Alma to see Ralph’s body and she confirmed that it was indeed Ralph. Alma also suggested that they find her father asap. Muriel met with Blair (Steffan Rhodri) to see if he knew Alma’s father but he kept turning the conversation to Oleg (Aleksandar Jovanovic) and told her he knew she had the coffee cup that could give him a case for a mistrial. When Muriel tried to leave, Blair told her to look for Henry Reeves (Barry Aird) in an old 1994 case.

Muriel turned her attention to Henry who she believed had changed his appearance and may be Alma’s father. He denied that was the case and told her that he was an accomplice of the man they were looking, John Joe, for years earlier.

Bill and Mary (Rachael Stirling) continued to see each other and Mary revealed that she was adopted. At the station Bill talked to Lydia about Alma’s childhood and they were interrupted by Muriel who had some news to share.

Tracking her down to a bar, Bill had a drink with Alma and they shared a heart-to-heart. He told her they would keep looking for her father based on the DNA evidence they found in the glove at the crime scene.

Bill returned home and found a note from Kelsey (Aloreia Spencer) and received an unexpected visit from Muriel. She told him that Alma thought a recent death was suspicious and could be linked. The information took them to speak with a woman whose husband had died. Bill wasn’t convinced but they found the same method had been used to gain entry through the back of the house.

Returning to the station, Muriel confirmed that the DNA at the second crime scene matched the first and that Jonjo was the person responsible. Bill had a conversation with Keith (Tony Pitts) who was in his office and frustrated that they hadn’t found John Joe yet.

Worried about the recent murders, Sean visited his father and changed the locks, giving him strict instructions about how to keep himself safe.

Bill confronted Lisa at the village hall and pleaded with her not to write her latest story. He wanted to know who her source was and although Lisa refused to tell him but that led him to Alma, who was nursing another hangover. She admitted she’d spoken to Lisa out of frustration.

Getting emotional, Alma told Bill she hated her father for physically abusing her mother and abandoning her. Bill shared his concerns about Alma’s drinking but had to leave when he had 9 calls from Kelsey’s school.

Rushing over to the school, Bill discovered that Kelsey had been suspended and when she showed no remorse for her out of character behaviour, he apologised on her behalf. After going for a run, Bill spoke with Mary who told him that Kelsey’s new friend was a bad influence and well-known for misbehaving.

Mary admitted she didn’t think she’d make a good mother and Bill confided that he was terrified when he became a father. He also told her that his wife died after hitting her head in a skiing accident.

Returning to the station, Bill arrived during a briefing that Muriel was giving to the team. When Sean got a dig in at Bill, Bill took over and told the team to get out on the streets to find John Joe.

Following a search by the team, Bill went home to collect Kelsey and took her to the library to see Alma but she wasn’t there. Her assistant told Bill that Alma didn’t drink and that she was sick. On the table Kelsey picked up a Stephen King book, which had been loaned out by Ralph but returned after his death.

Sean’s dad got an aggressive knock on the door and he reluctantly opened it. The episode then cut to Alma in the pub meeting with paramedic Henry who asked her why she never mentioned that Jonjo was her dad. Alma left the pub and headed off somewhere while at the same time someone broke into the library and took a motorcycle helmet from Alma’s locker.

Alma arrived at the flat of Sean’s father and broke in, the same way that the killer had. Her attempt was foiled as Sean was waiting for her and the rest of the police team. It was also revealed that Henry had been assisting Alma, that she planted her father’s glove at the scene and she was dying.

Bill visited Alma in hospital where a further reveal told us that she had a very rare blood type and that she needed her father to be able to have a transplant. She’d orchestrated the whole thing so that the police would help her find her father. Bill said they would keep looking for Jonjo but when she asked if he was dead, Bill told her it was most likely.

Kelsey had a meeting with the school about her suspension and Bill offered to help fund something for the school, which made the head teacher start to reconsider. Bill pointed out the double standards of the school and the teacher retorted by telling him Kelsey was the ringleader and her new friend had told on her to avoid punishment.

Muriel and Bill talked to Blair after realising that he knew where John Joe was. Blair refused to give them anything causing Bill to get angry and attack Blair. Blair used the opportunity, once Bill was out of the room, to get the coffee cup back. Muriel gave in but didn’t tell Bill, and they tracked Jonjo down to a Jesuit community where he was told Jonjo was dead. He realised the man he was speaking to was actually Jonjo but he had changed his identity to move away from his past.

Bill convinced him to visit Alma in hospital telling him he was the only person that could save his daughter’s life.

The episode ended with Muriel leaving the coffee cup on a bench for Oleg to collect.