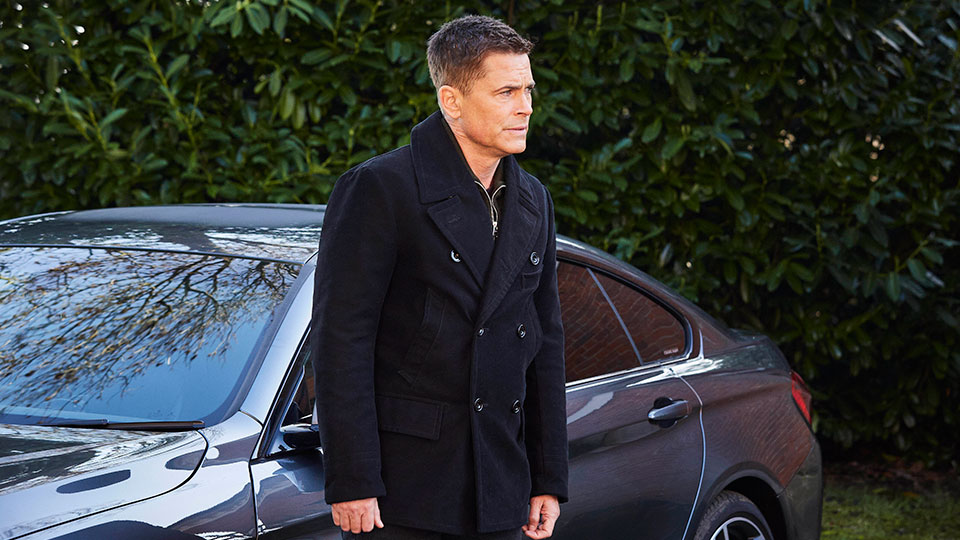 The first series of Wild Bill came to a close tonight as Bill (Rob Lowe) hunted a convicted killer that had gone into hiding.

Bill was told by Keith (Tony Pitts) that he was planning to sell a training centre and rent it back at a cheaper rate. Not pleased with what he was hearing, Bill suggested they sell the property to the work force so they can make the money they need without him having to cut 600 jobs. Keith was having none of it.

On his cycle home, Bill came across a pyre of bodies. The next day he and Muriel (Bronwyn James) found that there were five victims, all of which had been executed using a nail gun before being burned. Muriel briefed the team and informed them that they hadn’t been able to identify any of the bodies yet.

Bill asked Lydia (Anjli Mohindra) if she knew of a property company but she made a cutting remark about Bill’s pay bonus hinting at him profiting from others losing their jobs. Following that exchange, Bill visited Muriel at home and found she was testing out a nail gun to confirm it was the murder weapon.

Muriel shared some findings with Bill that suggested the murders could have been done by convicted hitman Frank McGill (Patrick Bergin), who was supposed to be in prison. She told him that Frank had gone AWOL and said they need to find him.

During lunch with Mary (Rachael Stirling), Bill heard that Mary had been taken off a case due to the coffee cup that Muriel gave Oleg (Aleksandar Jovanovic) that could help Blair (Steffan Rhodri) get a mistrial. Bill shared information about the nail gun murder case and it was revealed that Frank was in witness protection and living under a new identity.

Muriel briefed PC Drakes (Divian Ladwa) about Frank McGill and they looked through a file that included a photo of Frank with his wife.

Bill returned to his office and demanded Keith to explain why he wasn’t able to speak with Frank McGill. He was surprised when Keith revealed that Blair was about to walk from prison due to police malfeasance.

Following that revelation, Bill told Muriel that someone had stolen evidence from his desk and she lied to him but couldn’t hide her guilt. She quickly changed the subject and looked on helplessly when Bill continued to put his trust in her.

At home Bill and Kelsey (Aloreia Spencer) had a therapy session over a video call. Kelsey blamed Bill for using her as an excuse and he barked back that she’s always waiting for him to make a mistake. Bill became annoyed when Kelsey left the room so he ended the session abruptly.

Trying to identify the victims, Muriel visited the medical examiner some questions and found out that the bodies had been frozen before being burned. Bill found Frank’s address by looking up buildings that had been sold to the police in the local area.

They visited the address and found out that Frank had vacated the property and that there was a cover up so no one new that they’d lost track of him. Drakes broke a wall and found a severed head, who they did manage to identify.

Bill told Muriel that it was her job to find Frank. Giving her access to his computer, Muriel conducted various searches with Bill’s help to try and narrow down where Frank could be. That night Bill continued to search for Frank and went to answer the door when he heard a noise.

As he sat back down at his desk, Bill was confronted by Frank who pushed a nail gun in the back of his neck. Frank warned Bill to stop coming after him and told him that the head they found belonged to the last person that came looking for him.

They were interrupted by Kelsey who wanted to talk and Bill didn’t reveal that Frank was in the house. When he turned around, Frank was gone but he’d left marks on the carpet.

The next day Bill dropped Kelsey off at school and they had a row, causing her to storm off. A man got Bill’s attention after he picked up a bank note that Bill had dropped and gave it back to him.

Bill’s next visit was to Oleg, who he asked to tell him where Frank was. Oleg said he knew where he was but he wouldn’t reveal any information. He did deny that Frank was working for him and then teased Bill with the identity of the person who took the cup from evidence. Bill asked him to reveal the person but Oleg walked off instead.

Blair was released on bail and Lydia shared her frustration with Keith. Keith said that he needed to get rid of Bill and told Lydia that he wouldn’t give her the chief position, instead opting to choose another man over her.

Bill told Muriel that Frank had been to his house and he asked her not to tell anyone. Speaking to the medical examiner, she revealed that the first five victims weren’t killed by a nail gun and that they were homeless, which explained why they were frozen as homeless bodies are stored in freezers when they arrive at the morgue.

A little more digging led Muriel and Bill to the Maguire gang, who Frank turned in before going into witness protection. Specifically Terry Maguire (Michael James), the son of one of the members.

Lydia told Bill that Keith was trying to get rid of him and he told her that he wouldn’t be getting rid of 600 jobs. Bill once again shared his suspicions about the property company that the training centre was being sold to.

Bill bumped into Mary and they shared a tender moment. She asked him to stay with her rather than go off to track down the killer but he didn’t listen.

Arriving at the salt marsh on his own, Bill saw Frank in a white van that he decided to follow. He tried to call Muriel but his phone wouldn’t work. As he got closer, he was assaulted by Frank. Bill explained that someone was trying to frame Frank but Frank said someone was actually trying to find him.

Bill pushed Frank for answers about the killings but he was evasive. He urged Frank to come with him and promised to protect him, but Frank revealed that the Maguire’s were already on their way.

Unaware of what Terry’s grudge was against Frank, Bill kept asking questions. He got the truth out of Frank that he’d killed Terry’s mother, who he was in love with. Bill then realised he’d met Terry outside Kelsey’s school and that the bank note he’d given him contained a tracker.

Bill cycled through everything that was going on and Frank pointed out that maybe Bill was meant to die there too. Frank explained that Terry’s mother had wanted him to turn himself in and that Terence, Terry’s father, actually killed her not him.

Frank escaped through a hatch in the floor, leaving Bill alone as the Maguires opened fire. As the police rushed to find Bill, he discovered that Frank had killed Terry and the other shooter. Frank then revealed that Terry was his son and that he felt regret that he didn’t manage to get Terry and his mother away from Terence.

As he started to struggle, it was revealed that Frank had been shot. He died as Bill looked on helplessly.

Muriel found Bill and burst into tears. She hugged him but he didn’t return her affection.

Bill grilled Keith about the kick back he was going to get from the sale of the training centre. He told Keith he never should have hired him and promised to come after Oleg before taking down his friends too.

Laying out his intention, Bill refused to leave and an angry Keith walked off.

Bill and Kelsey had a heart-to-heart and reconciled when he dropped her off at school.

With so many loose ends left hanging, Wild Bill’s got to be coming back for a second series doesn’t it?

The first series of Wild Bill will be released on DVD on 29th July 2019. Pre-order it now.