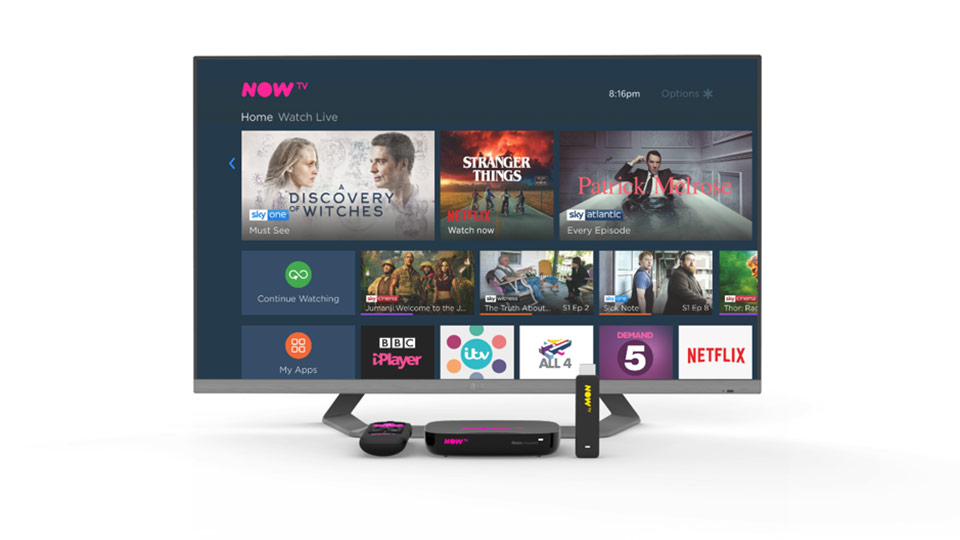 With so many ways to watch TV, most of which offer different content, it can be hard to decide which service or platform to go for. With many TV fans moving away from traditional entertainment packages from the likes of Virgin Media and Sky in favour of streaming platforms such as Netflix and Amazon Prime, which are considerably cheaper, there are a number of new offerings popping up on a regular basis. One such option is NOW TV, which is owned by Sky, but it offers more flexibility than taking out a contract with Sky would.

NOW TV gives you the ability to pick and choose how you use it. At its most basic, it can be used to access apps on your TV ranging including Netflix, BBC iPlayer, ITV Hub and All 4 to name a few. The bigger selling point though is being able to access premium Sky channels without having to commit to a contract. NOW TV offers a series of passes that you can subscribe to and cancel whenever you want. The Entertainment Month Pass gives you access to 11 live channels including Sky One, Sky Witness and Sky Atlantic, and a catch-up service and a wealth of on-demand boxsets, and will set you back £7.99 a month.

If movies are your thing then the Sky Cinema Month Pass gives you access to the full range of movie channels for £11.99 a month. There are also Sky Sports passes – you can pick between Day, Week and Month options – as well as a Kids Month Pass and a hayu Month Pass for those reality TV addicts out there. The flexibility of the service is without a doubt its appeal, especially considering how much more expensive it would be to pay monthly for the full Sky service or Virgin Media.

The NOW TV Smart Box with 4K and Voice Search is Roku powered. The box itself is impressively small and can be neatly tucked out of view once you’ve connected it to your TV with a HDMI cable. The 4K Ultra HD streaming delivers up to 60fps and if you’ve got a 4K TV then you’ll be very impressed with the quality. The colours are vibrant and the clarity is seriously impressively. If you have a standard HD TV, you’ll still find yourself impressed with the picture quality but a 4K TV will give you the best results.

The inclusion of Voice Search is welcome. The biggest downside I found with the NOW TV box is that it isn’t actually that easy to navigate around the menu screens and find what you want. Being able to speak into your remote makes it a lot easier but I would still say that unless you know what you’re looking for, it’s not that easy to find all of the content that’s available. The ability to search by shows, films, actors, directors and apps using your voice is a plus though and a big improvement for the platform.

Other features on the NOW TV service include the ability to pause live TV should you need to nip to the loo, answer the door and go grab more popcorn and a drink. It’s a handy feature that’s been standard across most live TV services for a while now. There’s a ‘Night Mode’ which reduces loud sounds so if you’re watching a particularly loud movie, it’ll auto-adjust the volume to avoid disturbing the whole house or your neighbours.

Overall I was pretty impressed with the NOW TV Smart Box with 4K and Voice Search. Friends had been trying to get me to give it a go for a while but I’d always been resistant due to the amount of other services I already have. At £45.99 it’s not out of the way expensive and some major retailers will give you a deal that includes a month’s Entertainment, Sky Cinema, Kids and Sky Sports Day Pass for £49.99 so you can see which passes suit you best. Obviously the more passes you buy, the more expensive it’ll be each month but I really like the flexibility of the service especially around the sports channels as you can buy passes just for the matches and events you want, rather than paying all 12 months of the year. I do feel that the menus and the manual search, without voice control, could do with a bit more work but that’s a small complaint when NOW TV offers so much.

Sign-up for a free NOW TV trial and get your NOW TV Smart Box with 4K and Voice Search now.

Advertisement. Scroll to continue reading.
In this article:Now TV