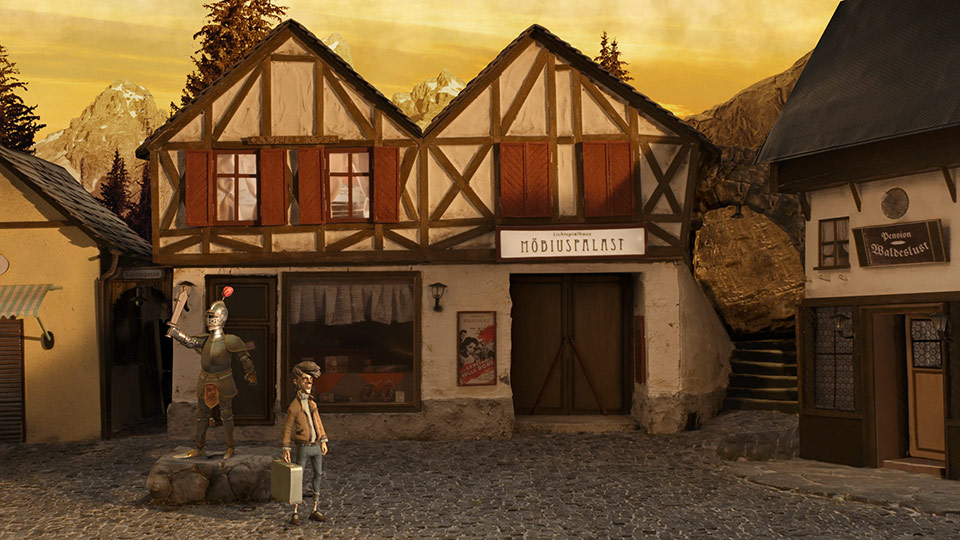 American quantum mechanics student Hans Tannhauser wins a vacation to a remote German Village known as Trüberbrook but he has no recollection of entering a competition to do so. Arriving in the village to work on his thesis, Hans notices that things are a little strange and following a theft from his hotel room, he gets pulled into the middle of a mystery that you have to help him solve.

Trüberbrook is a new addition into the point-and-click adventure genre, which may be past its peak in terms of popularity but is still throwing up a few surprises here and there. The game immediately disarms you by not putting you in control of Hans. For the introduction you take control of Greta Lemke, a researcher on her way to Trüberbrook who eventually crosses paths with Hans and becomes his accomplice.

Set in the 1960s, Trüberbrook aims for a Twin Peaks like feel and for the most part it achieves it. The game’s unique visual style is what will grab you first and it was created in a painstaking but effective way. The scenery is handmade and features more than 30 hand-crafted backgrounds. These were built as models and then digitised using a technique called photogrammetry, before being simplified for real-time rendering.

Interestingly each scene features physical lighting too, which gives a more realistic feel for the passing of time while playing the game. Those touches are really effective and they do make the game quite beautiful to play through. It’s an impressive effort to go to and the game definitely benefits from it.

The story of the game is interesting enough, unfurling slowly enough to keep you intrigued and providing some interesting twists and turns. It’s somewhat let down by the voice acting, which really lacks enthusiasm and conviction. Most of the actors sound half asleep, which is a shame as it makes the game feel as if it’s lacking in energy. The delivery of the voice actors is a little odd in places too.

In terms of gameplay, it’s pretty standard point-and-click fare. To progress you need to search the environments and interact with people and objects. There are a series of puzzles throughout the game that you need to work out. Most of them are fairly obvious but as with all point-and-click adventures, there are a few that will leave you scratching your head as you try to figure it out. For the most part though it’s not insanely difficult and you don’t have to take too many leaps in logic to move forward.

When interacting with other characters you are presented with a list of conversation points. The majority of the time you’ll get what you need by simply cycling through them all so there’s not a whole lot of skill required when you’re picking what to say. It’s more a test of patience as you wait for the conversations to unfold and play out.

Trüberbrook features a Kids Mode, which removes some of the more adult items that appear throughout the game to make it more family friendly. This extends to characters smoking with all cigarettes absent if you switch to this mode.

While visually it’s a stunning achievement, Trüberbrook lacks the genuine excitement that a point-and-click adventure can bring. When you think back to some of the genre’s best – Monkey Island springs to mind – Trüberbrook simply doesn’t have the charm and humour to fully win you over. It’s a decent enough experience to play through but it’s not the kind of game you’re going to be telling all of your friends about after you’ve played it. Weird and kooky, the game is definitely a little different but it never fully embraces its wacky side enough to make it truly memorable.

Trüberbrook was reviewed using a digital code supplied by the publisher.