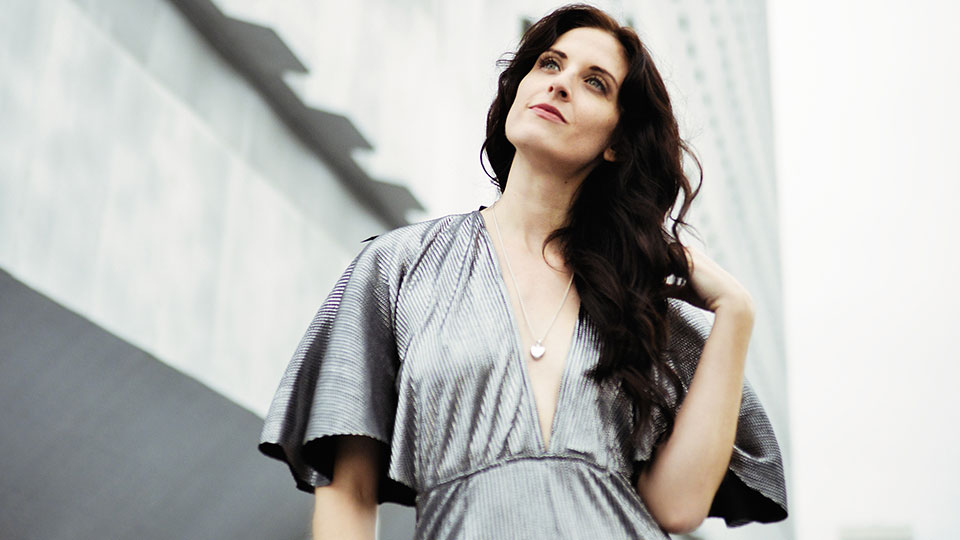 California-based singer-songwriter Michelle Vezilj is gearing up to release her deeply personal debut single Fire Goes to Die on Friday.

The track explores Vezilj’s own #MeToo moment in an honest, unflinching and raw way that is sure to help other people who have been through something similar. We’ve got the World Premiere of the lyric video, days before the song is released on streaming platforms.

To mark the premiere, we caught up with Michelle to find out more about the song, her music and her plans for the future.

Hi Michelle. How are you and where does this Q&A find you?

Hi Pip, I’m wonderful, thank you! I am currently in Hollywood, California, sitting at my desk, watching it drizzle over Runyon Canyon. Feels like the perfect Sunday!

You’re releasing your debut single Fire Goes to Die. Tell us the story behind the track.

Fire Goes to Die is my response to a terrifying #MeToo experience I had in my early 20s with the very well-known modelling agency, Elite Model Management. I was working closely with Elite’s London based director, Michelangelo Chiacchio. He had me in consideration for two major athletic modelling campaigns, one for adidas® by Stella McCartney and the other for Dior.

After a year and a half of strict dieting and regimented workouts, Michelangelo said that I was ready to meet with a company representative for final approval. Right before my meeting, I was put in touch with two models who were already working with Elite. They let me know that I would be propositioned during the evaluation, and if I wanted to book the job, I would need to follow through.

I was horrified, but I had flown myself out for the meeting and had dedicated such a large amount of time to this opportunity. I dismissed their claims and hoped that they were wrong. I was very young and naïve, but I knew my own boundaries.

I was sexually assaulted by the man Michelangelo Chiacchio insisted I meet before officially signing with Elite Model Management. This isn’t the first time that this has happened in the modelling industry. I hope that I am able to start a very important conversation about how these young people are being mistreated and abused.

If you’d like to read more, you can do so here.

It’s a deeply personal song. How difficult was it to get the point of being able to share this experience through a song?

I wasn’t able to talk about what happened to me for nearly 6 years. I didn’t tell a single soul. I was ashamed and blamed myself. It wasn’t until other women came forward that I realized I needed to say something. When I finally told my sister, I felt relief.

If there’s one thing I could say to other survivors of sexual assault, it’s that you are not alone.

In what ways has writing and recording this song, helped you process and move through the trauma this experience caused?

Writing and recording Fire Goes to Die was very therapeutic and healing, but I think what actually helped me move through the trauma was singing it live onstage. When I share my story, I am encouraging others to share their own. It’s so liberating to sing a song like Fire Goes to Die. It’s my anthem and I hope it becomes yours too.

What’s the plan for new music following the release of Fire Goes to Die? Will you be releasing an EP or perhaps an album?

Over the last two years, I have written an album worth of songs. I plan to put out two more singles this year, I Cannot Love You Anymore in the fall and How Do You Get to the Dead? in the winter, followed by an EP at the beginning of 2020.

Give us a little insight into your creative process. How do you turn ideas into songs and where do you draw most inspiration?

Writing is a very spiritual practice for me. My best songs seem to come out of thin air. Through each step of the process, the song shifts and changes. From scribbling down lyrics to humming through melodies to writing on an instrument, I try to remain as open as possible. It’s exciting because I never know where I’m being taken until I get there.

You’ve been working on some songs for films recently. What can you tell us about those and how did they come about?

I’m very lucky to be a part of the film community here in Los Angeles. I’m an actor so it feels like home writing music for TV and film.

When did you decide that you wanted to pursue music as a career and which artists have inspired you?

I’ve always loved music. It’s a part of my DNA. I’ve been singing since the moment I could open my mouth. I’m pretty sure my first word was sung.

I got a BFA in Musical Theatre from The University of the Arts in Philadelphia and then went off to New York City to tackle Broadway. I ended up booking a musical-comedy tour written out of Toronto’s Second City which is where I met my first musical partner, Gabe Bowling. Together, we formed the duo, Drink Me Up, and released an award-nominated EP.

The artists that have most influenced my music are Regina Spektor, Florence + the Machine, Sara Bareilles, Ingrid Michaelson, and Jon Bellion.

You’ve got a show coming up at Hotel Café to mark the release of Fire Goes to Die. Where else can your fans see you performing in the coming months?

For each upcoming release, I’ll play a show to celebrate. Right now, I don’t have specific dates lined up, but I’m set to play the Troubadour later this year. It’ll be an honor to sing on the same stage as so many of my idols such as Joni Mitchell, Carole King, and Carly Simon.

I just recorded the vocals for the end credit song of Fantawild’s feature film animation, Boonie Bears: Blast into the Past which will have a worldwide release. In June, I’m shooting a featured role and writing original music for the film The Chariot, written and directed by Adam Sigal (Sargasso), and it hasn’t been officially announced yet, but I also have a project hitting Netflix in the next couple of months. Lots of fun stuff on the horizon!