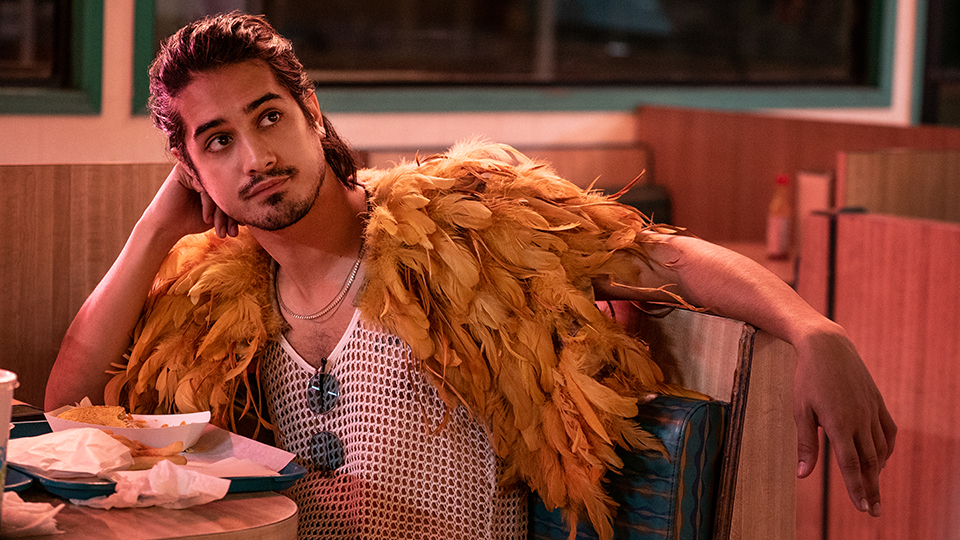 Uly (Avan Jogia) decided to try and get over Gabriel (Tyler Posey) by getting under someone new on the latest episode of Now Apocalypse.

Episode 6 ended with Uly chasing a homeless man and falling head first over a gate. He told Carly (Kelli Berglund) that he fell flat on his back and when he looked up he met a guy called Isaac (Jacob Artist), who he agreed to go on a date with.

Uly also told her that he and Ford (Beau Mirchoff) had made up following their row in the last episode. Carly revealed that she’s selling her urine to one of her clients now to make some extra cash and asked Uly for his cup so she could pee in it and leave it outside the diner for her client to pick up.

After another dream about Gabriel, Uly spoke to Carly about it and she told him he really needs to stop smoking so much weed. He insisted that there was something behind the dreams but Carly dismissed him as being ‘too baked’ to think straight and urged him to go clean for a few days to see if it made a difference.

When Carly returned home she found a strange woman dying her armpit hair blue on the sofa. It turned out to be her new room-mate and to make matters worse, the woman had rented out her bedroom to a family on Air BnB.

Furious, and in need of the toilet, Carly grabbed some tuppaware, went to her room and peed in it. Her angry increased when her crappy actor friend text to say he’d landed a role in Star Wars so Carly text Jethro (Desmond Chiam) asking if she could go and stay with him.

Meanwhile Uly had his date with Isaac and it went really well apart from him hallucinating Gabriel. The two hit it off and they found a quiet spot in L.A. to look over the city and make out.

Arriving back at Uly’s the two got hot and heavy but when Isaac suggested they give each other handjobs, after Uly said he didn’t want to have sex, Uly got flashbacks to Gabriel and the vibe was killed. Uly apologised to Isaac and the two agreed to meet up again but wait before having sex.

As Isaac was about to leave, they changed their mind and kissed passionately as they closed the door.

Severine (Roxane Mesquida) took Ford to a lavish sex party and encouraged him to find some people they could sleep with. He spoke to a number of women and chose one who had a male slave.

Excited he and Severine had sex with the woman next to another couple having sex. The next day, basking in his latest sexcapade, Ford was shocked to find the photos that Otto (Devan Chandler Long) had taken of him plastered all over Los Angeles for an underwear commerical.

Ford freaked out to Uly and was reluctant to answer Severine’s call. Turned out she was turned on by the photos and had organised a surprise for him at her apartment that night.

Before Ford arrived, Severine spied on the mysterious man in the flat opposite hers, and when Ford knocked on her front door, she told him she’d be there in a minute. Who is this guy?