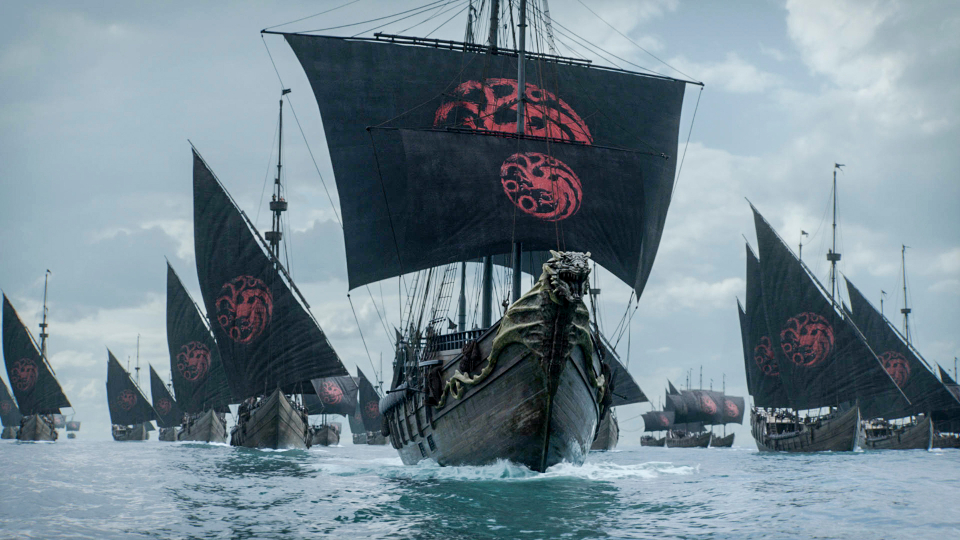 The fourth episode of Game of Thrones season 8, gave us the aftermath of the Battle of Winterfell and set events in motion for the final two episodes.

If you haven’t seen Game of Thrones season 8 episode 4 yet and don’t like to read spoilers then please stop reading now. If you are up-to-date and want to relive the action then keep on reading.

The episode began with the Battle of Winterfell survivors holding a mass funeral for those who lost their lives. The survivors lined up in outside the walls of Winterfell as the bodies of the fallen were piled up on pyres. It was our last chance to see the likes of Ser Jorah (Iain Glen), Theon (Alfie Allen), Lyanna (Bella Ramsey), Beric (Richard Dormer) and Dolorous Edd (Ben Crompton).

It was an emotional goodbye, with Dany (Emilia Clarke) shedding the most tears as she kissed the head of Jorah. Sansa (Sophie Turner) placed her Stark pin on the body of Theon. Jon (Kit Harington) gave an emotional speech to say goodbye to those who set aside their differences to fight and die together. He said that the debt could never be repaid but it was the duty of those that survived to keep them alive in memory.

Following the ceremony, the survivors gathered in the Great Hall for a solemn feast before celebrating in honour of those they lost. Dany appeared to take issue with Gendry (Joe Dempsie) before deciding to proclaim him to be the new Lord of Storm’s End. She also toasted to Arya Stark (Maisie Williams) the Hero of Winterfell. While everyone got into the celebration, Dany couldn’t help but notice how loved Jon was by everyone as she sat alone and paranoid.

Tyrion (Peter Dinklage), Ser Brienne of Tarth (Gwendoline Christie), Jaime (Nikolaj Coster-Waldau) and Podrick (Daniel Portman) played drinking games. Brienne became embarrassed when Tyrion guessed she was a virgin and left, followed by Jaime. Tormund (Kristofer Hivju) was upset but consoled himself with a young Northern girl. Sansa sat briefly with the Hound (Rory McCann) after he turned down a girl to enjoy his drink. She said the girl could have made him happy for a short while. The Hound spoke of the horrors that Sansa had been through and said had she left King’s Landing with him, none of it would have happened. Sansa said had she done so, she would have still been a “little bird”.

Gendry excitedly took his news to Arya (Maisie Williams) who was practicing her bow and arrow skills. He said he loved her and proposed to her. They kissed but Arya turned him down, saying she’d never been a lady. Meanwhile, Jaime followed Brienne to her room with more wine. Inside he said it was too hot and proceeded to remove items of clothing. He asked her of Tormund and she asked if he was jealous. He said maybe he was and struggled to remove his shirt due to having just the one hand. Brienne went to help him and he began to remove hers. He said he’d never slept with a knight before and then they slept together.

Elsewhere, Dany sought Jon out and asked if he was drunk. He said no but realised he probably was a bit. He commented on how Jorah died the way he wanted. Dany said Jorah had loved her but she couldn’t love him back. She told Jon she loved him and asked if it was alright. They kissed but Jon pulled away and she said she wanted things to be as they were. She spoke of her fears about how everyone looked up to him. Jon said he didn’t want to rule and that he’d refuse as she was his queen. Dany told him that he had to make sure Sam (John Bradley-West) and Bran (Isaac Hempstead Wright) kept quiet. Jon wanted to tell Arya and Sansa but she begged him not to as Sansa would want her gone and that the truth would destroy them.

The next day, Dany and Jon held a war council to plan their moves against Cersei (Lena Headey). It seemed that they had lost half their men but their army was still evenly matched against Cersei. Dany wanted to hit Cersei hard but Tyrion was keen to stress removing her without destroying King’s Landing. Jon proposed a blockade to cut off resources to the city in the hope the people would reject their queen. They also spoke of how Yara (Gemma Whelan) had retaken the Iron Islands and that there was a new Prince of Dorne.

Sansa said that they needed to let their soldiers rest before fighting again. Dany said she had kept her promise to fight with the North, now they needed to do the same. Jon spoke up and sided with Dany saying that the Northern armies would keep their promises and he’d do whatever she commanded.

The plan was that Daenerys would take her dragons and some of her forces to White Harbor to sail for Dragonstone. Meanwhile, Jon and Davos (Liam Cunningham) would march the army south via the Kingsroad. Jaime was to remain at Winterfell as a guest.

Arya and Sansa requested a meeting with Jon and took him to the Godswood where creepy Bran was waiting. The Stark sisters voiced their concerns about trusting Dany and talked about family. Bran told Jon it was his choice and Jon decided to tell them about his lineage after making them swear not to repeat what he had to say.

Tyrion and Jaime shared a drink and Jaime explained that Brienne was staying with him. Tyrion joked it was about time Jaime had to climb for something but was happy that his brother was happy. Bronn (Jerome Flynn) turned up with crossbow in hand and told them of his mission but bet his money on Cersei losing. Still he wanted assurances that they would stick to Tyrion’s promise to double Cersei’s offer of Riverrun. He ended up punching Tyrion in the face, almost breaking his nose and fired a bolt close to Jaime to show he was serious. They came to an agreement that he could have Highgarden. He refused to ride south to fight.

Before everyone departed, Sansa caught up with Tyrion and told him Jon’s secret. The Hound (Rory McCann) set off to deal with his unfinished business, which is presumably his brother. He was caught up by Arya who decided to ride with him. They both agreed they had no plans to come back and when the Hound asked if she’d leave him to die again she said probably.

Tormund announced his plan to head back North beyond the Wall with the free folk. Jon asked that he take Ghost with him, who was injured in the Battle of Winterfell. Jon didn’t even say goodbye to Ghost and I’m really hoping he still has a part to play. Before Jon left, Sam (John Bradley-West) and Gilly (Hannah Murray) announced they were having a baby. They said if it was a boy they’d call him Jon and Jon joked he hoped it was a girl.

As Daenerys headed back to Dragonstone, Tyrion discussed Jon’s secret with Varys (Conleth Hill) and they deduced that eight people now knew. Varys said it was no longer a secret but information and would keep spreading. They couldn’t decide what to do for the best and Tyrion said maybe Cersei would solve the problem by killing them all. A bolt came out of nowhere and struck Rhaegal. Euron Greyjoy (Pilou Asbæk), aboard his ship The Silence, and the rest of the Iron Fleet were waiting and they all had scorpions. More bolts were fired, narrowly missing Drogon, but another hit Rhaegal through the neck and he plummeted into the sea.

Euron’s attack moved on to decimate the rest of Dany’s fleet. Everyone had to jump into the sea and swim to shore to survive. As the survivors pulled themselves out, Grey Worm (Jacob Anderson) noticed that Missandei (Nathalie Emmanuel) was missing. She’d been captured by Euron who took her back to Cersei as their prisoner. Cersei opened the gates of the Red Keep to the people to use as human shields. She also told Euron of her pregnancy and said their child would rule.

Furious at the loss of Rhaegal and her most trusted advisor being captured, Dany wanted to destroy King’s Landing and Grey Worm was happy to storm the city. Varys told her that she was making a mistake and that thousands of innocent people would die. Tyrion suggested offering to let Cersei live in exchange for the Iron Throne. Dany spoke of her destiny and said she would free the world from tyrants no matter the cost. Not realising she’s fast becoming the worst of them all.

In another conversation between Tyrion and Varys, the Spider gave his opinons on Dany. Tyrion stuck by the queen but Varys went as far as saying he’d act in the interest of the people, which sounded a lot like a promise of murder. They wondered if Dany and Jon could just rule together but Varys said she was too strong for him.

News of Euron’s attack reached Winterfell and Jaime decided to return to King’s Landing. Brienne begged him to stay but he said he wasn’t a good man and spoke of the terrible things he’d done for his sister. Jaime rode off leaving Brienne in tears.

Dany, Drogon, Tyrion, Varys and Grey Worm arrived at King’s Landing with a group of Unsullied. On the walls, Cersei stood with the Mountain (‎Hafþór Júlíus Björnsson), Euron and Missandei in chains. Qyburn (Anton Lesser) walked out to meet Tyrion who requested that Cersei surrender. He refused and said if Dany didn’t surrender, Missandei would die there and then. Tyrion said Qyburn was a rational man and begged him to help save the city. Qyburn said he was just a mouthpiece for Cersei.

Tyrion walked past him and the archers on the wall prepared to fire. It looked like Cersei might give the order but she had them stand down. Tyrion tried to appeal to his sister and spoke of her love for her children but it didn’t work. Cersei told Missandei to say her last words. She chose to should “Dracarys” which was her last advice to Dany to burn the city. Cersei gave the word and the Mountain decapitated Missandei as those below watched in horror.

The episode ended with an even more furious Dany storming off towards Drogon. Will she get her revenge and claim the Iron Throne?

Find out which main characters died during episode 4.

Can’t wait for the next episode? Watch the trailer and read our preview for Game of Thrones 8×05.