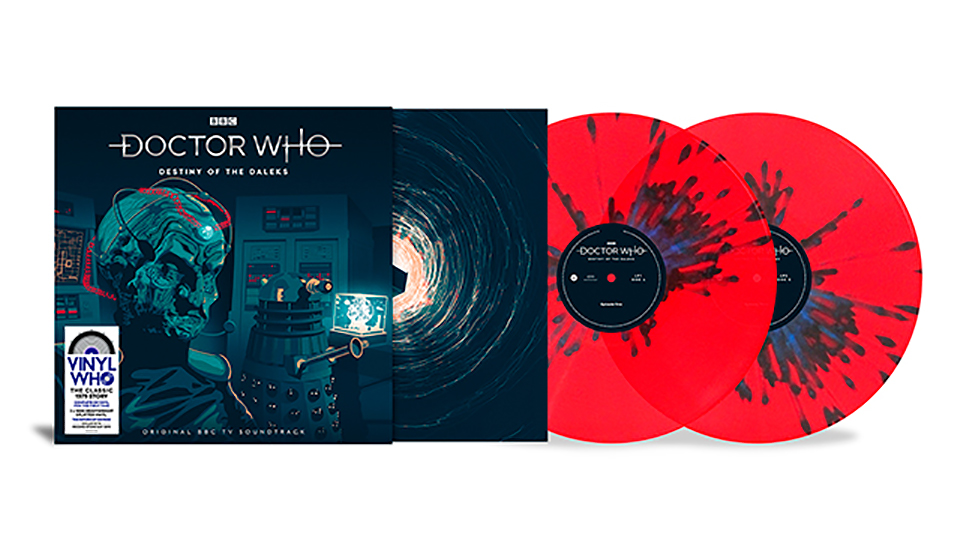 Destiny of the Daleks is the second story from Doctor Who’s Seventeenth Season to enjoy a new lease of life as an audio adventure on vinyl, following the earlier release of the ever-sparkling City of Death. The story stars Tom Baker as the Fourth Doctor and Lalla Ward as his companion Romana. First screened in 1979, Destiny of the Daleks followed on from 1975’s Genesis of the Daleks, and was once again written by Terry Nation (though his words have undoubtedly been massaged somewhat for comic effect by script editor Douglas Adams), who had created the popular monsters in 1963.

The story is full of traditional Dalek and Terry Nation tropes. Once again, we are on the planet Skaro, and the Daleks are using humanoids for slave labour to work in their mines (a neat nod to The Dalek Invasion of Earth). Whereas earlier stories had seen them locked in an eternal struggle against the Thals, here it is the Movellans they have reached a stalemate with in their unending conflict. The arrival of the Doctor on the scene shakes things up a little, especially when he unearths what the Daleks have been digging for – Davros, their creator – and revives him from suspended animation.

On screen, there are a few elements that work against Destiny of the Daleks. Rampant inflation in the late 1970s (as a consequence of socialism) meant that in real terms, Doctor Who’s budget was much less than it had been only a few years earlier. Consequently, by this stage the show looked cheap and cheerful, with Daleks held together by strips of gaffer tape. The following season even saw shorter episodes introduced to help the budget go further. The Movellans, who play a pivotal role in the story, look as if they have mistakenly wandered on from the set of Top of the Pops, and their outrageously camp costumes are hardly reined in by the casting of the terrifically entertaining Peter Straker as Commander Sharrel. None of this matters at all on audio, where the imagination creates realism in the mind’s eye.

Tom Baker always made Doctor Who an enjoyable experience, and his charismatic central performance and distinctive vocals are the listener’s guide through the story, and the high-quality vinyl ensures that the sounds are intensely rich. It’s true that David Gooderson, effective though he is as Davros, doesn’t have quite the same impact as Michael Wisher, though Destiny of the Daleks returns the Daleks to the foreground, leaving Davros as a supporting figure, which is a welcome move. It hardly detracts from the audio experience, where Dudley Simpson’s classic score takes on a fresh resonance.

Lalla Ward’s linking narration fills in the blanks for the story. Well-used to voiceover, having provided it for many audio versions of Richard Dawkins’ science books, she is a steady and authoritative, but not intrusive presence, and she sounds much the same as she did in 1979 when she stepped out of the TARDIS for the first time as Romana.

Destiny of the Daleks is magnificently presented on two 180g vinyls, with red and blue splatter that give them the look of poppies. It is presented in a gatefold sleeve with striking design and artwork. The release is limited to 2,500 copies, ensuring that it is a real collector’s item. This version of Destiny of the Daleks is an ideal addition to the shelves for fans of the golden age of the show, and especially those who enjoy an audio treat.