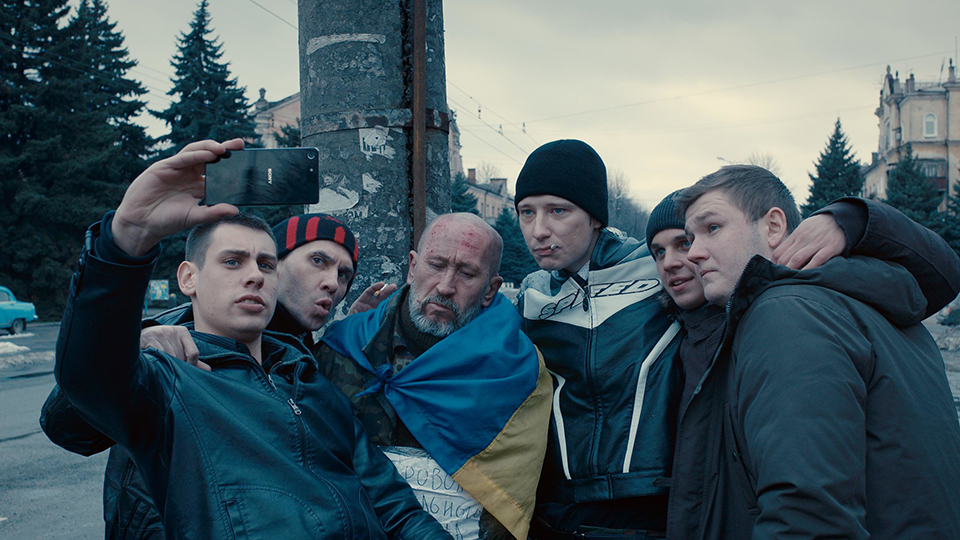 Donbass is the fourth film from director Sergei Loznitsa and it concentrates on the troubled Eastern Ukranian region. Inspired by amateur videos Loznitsa watched on the Internet, Donbass tells a series of stories highlighting the situation in the region where pro-Russian separatists and nationalists clash as they try to co-exist together. The film is a series of vignettes that look at often unrelated characters and give shocking glimpses into the reality of life in Donbass.

The film opens with a group of actors preparing for a shoot in a trailer. As they step outside, it appears that war is breaking out and the actors take cover but you’re not sure if what you’re seeing is reality or part of the film they’re making. It catches you off-guard but prepares you for the unconventional, and often difficult, material that’s coming your way over the film’s two-hour duration.

Rather unexpectedly, Donbass contains plenty of dark humour and there are moments where you’ll find yourself laughing. Fake news gets brought up throughout adding a very topical element into the film. You’ll also probably feel like you should be so much as smirking when some of the film’s grislier scenes come along. One vignette shows a man tied to a lamppost who is being shamed in the street. Passers-by are encouraged to carry out acts of violence towards the man as they pass him and it’s actually pretty difficult to watch.

There are other vignettes that are a little more light-hearted such as a confrontation between a woman who believes she’s been libelled in the newspaper and a politician defending the free press. For the most part though, the vignettes increase with intensity and brutality as the film progresses, and for me the vignette approach made me feel a little disconnected. While there is certainly a cohesion among all 13, it’s a little hard to get too invested in characters we don’t really spend much time with or get under the skin of.

Donbass won’t be for everyone. Fans of Loznitsa will no doubt lap it up but wider audiences may find the material here a little too weighty or difficult to penetrate. The film is certainly an ambitious and fascinating project but it’s also fairly niche, guaranteeing it will be lauded by the critics but largely missed by cinemagoers in the UK.