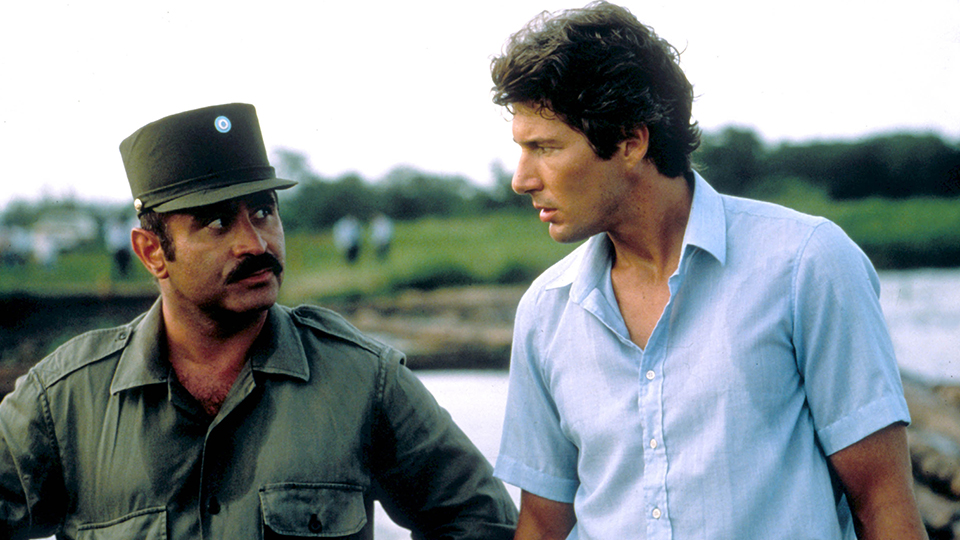 Doctor Eduardo Plarr (Richard Gere) resides and works in a small Argentinian town after fleeing Paraguay with his mother when he was a young boy and his father was held as a political prisoner. Contacted by his childhood friend Leon (Joaquim de Almeida), a former priest who has joined a group of underground rebels, Plarr is blackmailed into providing information about a visit by the United States Ambassdor. The group plans to kidnap him but instead they accidentally capture Charley Fortnam (Michael Caine), the British Consul, whose wife Clara (Elpidia Carrillo) is having an affair with Plarr.

The Honorary Consul was released in 1983 and it’s an adaptation of Graham Greene’s 1973 novel of the same name. The film wasn’t a hit at the box office and it was met with decidedly mixed reviews from the critics. Now released for the first time on Blu-ray some 36 years after its original release, and with Richard Gere just having finished headlining his first TV series MotherFatherSon, it’s an apt time to revisit the film.

The Blu-ray transfer is superb. It never ceases to amaze me just how well older films scrub up and it really brings out the colours in the gorgeous locations it was shot in. It’s also a reminder of just how dashing Gere was in his prime, looking just that bit lovelier in high definition.

Sadly the same can’t really be said about the film. Gere is actually it’s biggest problem although I feel it probably wasn’t altogether his fault. With a dodgy British accent, Gere plays a version of Eduardo Plarr that is far removed from the character in Greene’s novel. He is surprisingly bland, playing the character in a very one-note way that doesn’t really bring him to life. Opposite Michael Caine, who is excellent as the alcoholic Charley Fortnam, Gere is acted off the screen and that really shows when the two are together.

Plot-wise, The Honorary Consul is a little all over the place. Director John Mackenzie doesn’t seem to know what kind of film he wants to make: is this a thrilling political drama or a torrid romance tale of an ill-fated affair? By the time the credits roll you’ll be none-the-wiser although the climax does serve to provide some kind of pay-off for a film that should have been a lot better than it was.

Bob Hoskins provides solid support as Colonel Perez while Elpidia Carrillo struggles to do much with her character Clara, in most part due to being drastically underwritten and used only as a plot device to come between Plarr and Fortnam.

The Honorary Consul is a film that should be celebrated for Caine’s wonderful performance and I imagine it’s one that Gere completists will be happy to add to their collection. If you’re not a fan of either actors, there’s really not a lot here that’s going to interest you. The Honorary Consul is watchable but it’s not particularly memorable and it doesn’t measure up to Greene’s far superior novel.