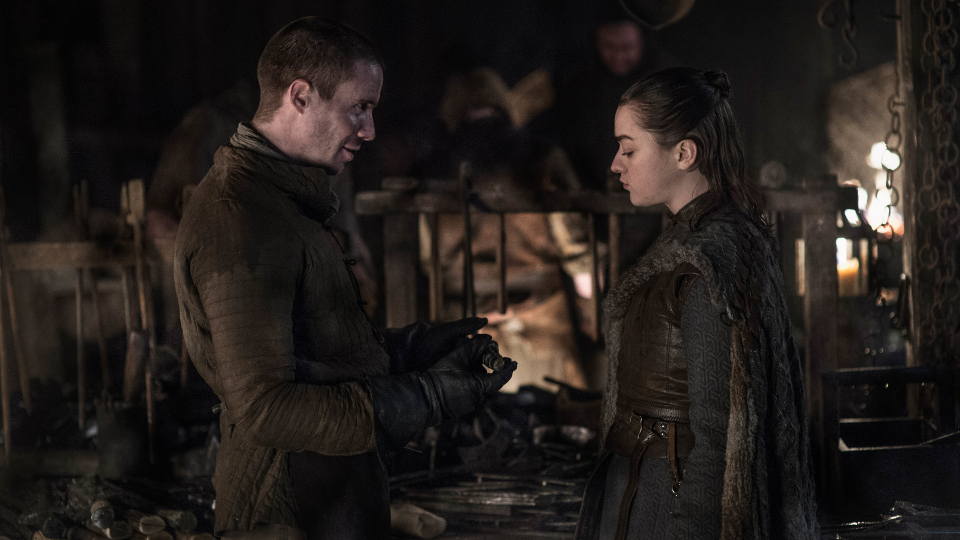 The eighth and final season of Game of Thrones is now in full swing. With the first two of six episodes out of the way there’s some big questions about what will happen during the Battle of Winterfell. One of the biggest mysteries at the moment surrounds Arya Stark (Maisie Williams) and her new weapon.

In the first episode of season 8, Arya (Maisie Williams) put in a special request with Gendry (Joe Dempsie) to forge a bespoke weapon just for her. We only got to see a brief glimpse of the plans but it appeared that at least one end should feature a Dragonglass tip and be capable of splitting into two parts. It also looked like it probably had multiple uses as a staff, spear/javelin and possibly even a dagger.

In the second episode of the season, Arya made sure that Gendry made her weapon. She had a quick play with it and commented that it would do what she needed. Earlier in the episode Arya showed off her precision at knife throwing. This new weapon should give her a variety of options from ranged to melee combat. We’ve now got a proper look at her new weapon thanks to the official Making of Game of Thrones blog.

Fans will remember that in season five, Arya found herself at the House of Black and White in Braavos. This was the temple of the Many-Faced God and also served as the headquarters to the mysterious assassin’s known as the Faceless Men. Here Arya trained under Jaqen H’ghar (Tom Wlaschiha) and one of his acolytes who Arya named the Waif (Faye Marsay). During her assassin training she was blinded as punishment for breaking the rules.

In season six, Arya eventually regained her sight after passing her training. During her time with the Faceless Men she mastered her senses and became a skilled fighter. The Waif made a serious attempt at killing Arya but she escaped. Once recovered she set a trap and killed the Waif due to her ability to fight in complete darkness.

The official trailer for Game of Thrones season 8 showed Arya running scared in what appeared to be the Winterfell crypts. We don’t yet know who or what she is running from. Whether it’s a wight, a White Walker or the Night King himself her assassin skills combined with her bespoke Dragonglass spear should make her a formidable foe.