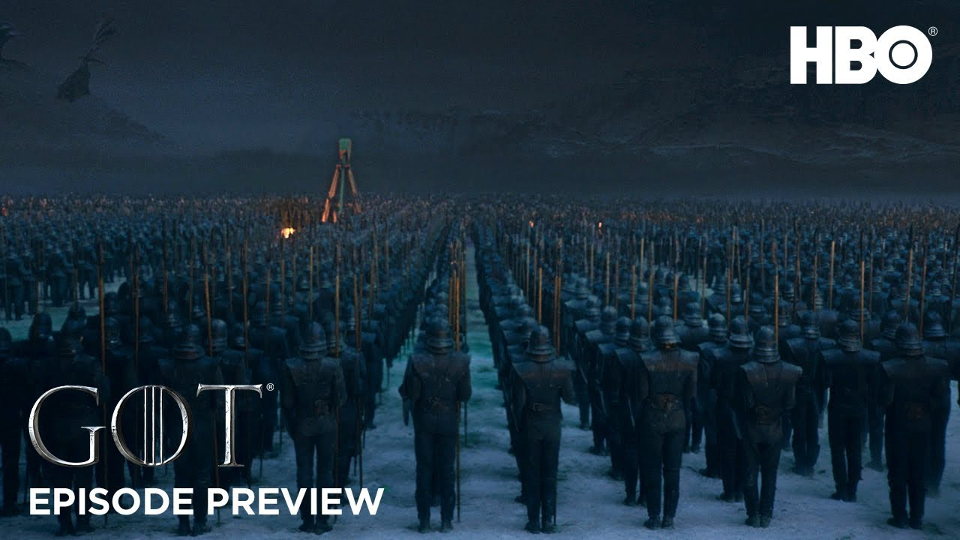 The second episode of Game of Thrones season 8 focused on the preparations at Winterfell for the impending arrival of the Night King and his Army of the Dead.

Like the first episode, the second wasted no time and dealt straight away with the arrival of Jaime Lannister (Nikolaj Coster-Waldau). Daenerys (Emilia Clarke) had long wanted him to pay for his crimes and Sansa Stark (Sophie Turner) didn’t trust him. However, Brienne of Tarth (Gwendoline Christie) vouched for him so they decided to let him stay.

As preparations for the upcoming battle continued, Theon (Alfie Allen) arrived to fight for Winterfell and promised to protect Bran (Isaac Hempstead Wright) who said he was the target of the Night King.

Tormund (Kristofer Hivju), Beric (Richard Dormer) also arrived, along with Edd (Ben Crompton) and the remaining Night’s Watch. They told Jon (Kit Harington) of the massacre at Last Hearth and Tormund said the Army of the Dead would arrive before the sun came up.

Gendry (Joe Dempsie) got busy making more Dragonglass weapons for everyone and completed the special request for Arya (Maisie Williams). He also got busy with Arya after she announced she wanted to sleep with him.

Many of the main characters sat around for a drunken lock-in, in front of a fire. Tormund told a story, Tyrion got drunk, Podrick (Daniel Portman) sang a song and, in an emotional scene, Jaime knighted Brienne.

At the end of the episode, Jon revealed his true identity to Dany who didn’t seem best pleased that he leapfrogged her to the front of the queue for the Iron Throne. Before she could really say or do anything about it the White Walkers arrived!

Read our Game of Thrones 8×02 A Knight of the Seven Kingdoms recap for full details on the episode.

In episode 3, we’ll finally get to see the much-hyped Battle of Winterfell which promises the biggest battle ever committed to film. The trailer doesn’t give us much in the way of action but sets the scene perfectly. It shows the various armies lining up outside Winterfell ready to face the Army of the Dead.

Sansa can be heard to say “The most heroic thing we can do now is look the truth in the face.” Along with the armies we see catapults and trebuchets lined up. Grey Worm (Jacob Anderson) is shown looking serious and ready for battle as he dons his helmet.

There’s a shot of Jon and Dany looking out at the battlefield, possibly away from Winterfell with the dragons?

Sam appears to be down with the troops as he wanted. While on the ramparts Sansa and Arya look out as Ser Davos (Liam Cunningham) paces.

Down in the crypts, Varys (Conleth Hill) looks worried as he takes shelter with the women and children because they’ll all be totally safe down there, right? Tyrion and Ser Jorah look like they mean business.

Jon is heard to say “The Night King is coming” and a shot of him looks like he’s already been fighting with a backdrop of fire behind him.

The final montage shows Arya running from something through Winterfell. The Unsullied are shown marching while the Hound (Rory McCann) and Beric appear to be up to something.

There’s a snippet of a dragon flying and roaring, possibly Rhaegal with Jon riding him? Theon with a bow and flaming arrow and Jon unsheathing his sword, Longclaw.

Another snippet shows Jon and Dany face to face as she says “The Dead are already here”. That sounds a bit ominous, is she referred to the Army of the Dead outside Winterfell? Have they breached the walls? Maybe found their way into the crypts? Or worse still, resurrected the dead in the crypts? Eek!

The final shot shows troops led by Brienne, with Jaime alongside her. They are looking out into the dark as Brienne screams “Stand your ground!”

Will they all survive as Tyrion predicted? I highly doubt it. Which characters do you think will live and die? Let us know your predictions via our Twitter and Facebook pages. Remember to give us a Follow or a Like while you’re there!