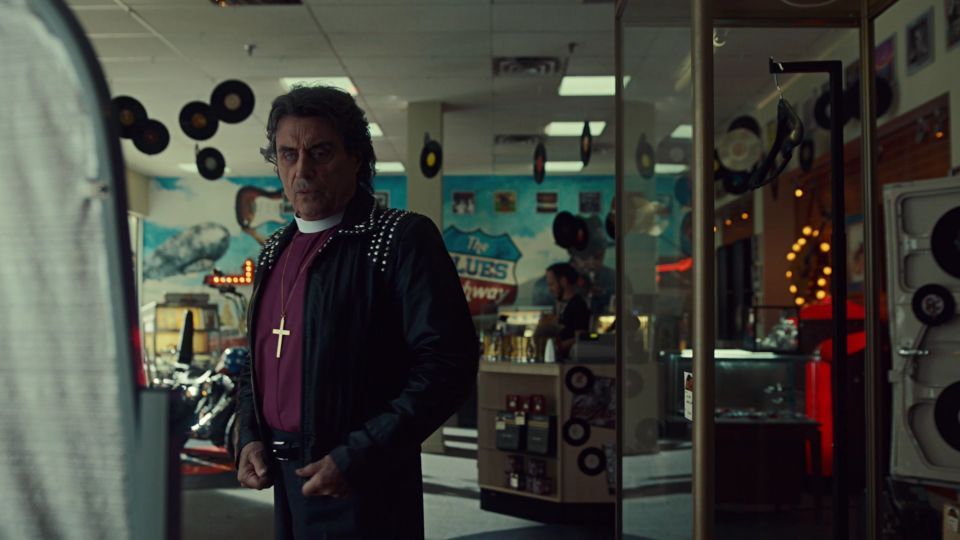 American Gods season 2 episode 6 Donar the Great is split into two parts. One part is set in the current day with the other set in the 1930s.

The 30s element is centred around Mr Wednesday (Ian McShane) and his role as the owner of a burlesque show bar. He goes by the name of Al Grimnir and he has several gods working as performers and why not? What better way is there to get worshipers other than to be surrounded by cheering fans?

The gods who work here include Mr Nancy (Orlando Jones), Thor (Derek Theler) and Columbia (Laura Bell Bundy). Thor and Columbia are performers whereas Nancy just seems to walk around shouting at everyone.

Mr Wednesday is approached by an American Nazi to recruit Thor into a strongman competition and we see an older version of Techboy trying to recruit Columbia to be the face of the war effort. After some manipulation by Wednesday Columbia ends up joining Techboy. Thor is heartbroken and ends up fighting with Wednesday using his hammer, Mjolnir, to break Wednesday’s spear, Grungnir. We later learn that Thor took his own life years after, a death no god can come back from.

The present-day storyline is based around Wednesday and Shadow (Ricky Whittle) trying to convince the dwarven engraver Dvalin (Jeremey Raymond) to fix the spear Grungnir. He will, but for a price, he wants the signed Lou Reed leather jacket that is for sale in another part of the shopping mall. Wednesday refuses to spend money on dwarves and sets up an elaborate scam to steal the jacket where he poses as a priest that ends up being ‘arrested’ by Shadow. The scam works, the dwarf gets the jacket and reforging begins.

That’s all there is of note in this episode. The part set in the 30s is full of holes and is somewhat far-fetched when you look into how simply Columbia and Thor were duped. The scam set up by Wednesday and Shadow is painful to watch and I can’t help but feel that the show is veering wildly off the tracks into stupid territory.