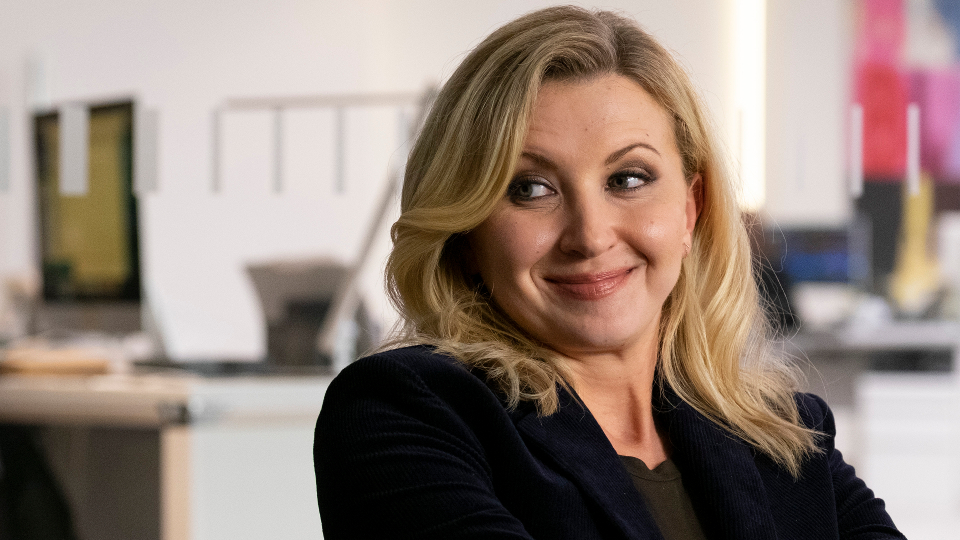 On the fourth episode of Billions season four, Chuck (Paul Giamatti) made a bold move to better his career.

The episode opened up the night before the election for the State Attorney General for New York. Last episode, Chuck reached out to Axe (Damian Lewis) for help and he agreed. His efforts seemed to be working by targeting those who might not vote for Chuck. For example he had a team of men sabotage the school buses making it less likely the parents would be able to vote. Axe thinks he’s going to swing it but Chuck reveals he may have to just pull out of the race.

We then find out that the night before, Black Jack Foley (David Strathairn) told Chuck Rhoades Sr. (Jeffrey DeMunn) that he would do whatever it took to prevent Chuck from winning. The ace up his sleeve was to tell the public about how Chuck was involved in sadomasochism with his wife Wendy (Maggie Siff).

Axe tried a pep talk and said Chuck should keep fighting. He reminded him of when they were up against each other and that Chuck was one of the fiercest opponents he’d dealt with. Chuck’s father suggested that Chuck let Foley reveal whatever he liked then just deny it and strike back.

Chuck knew that he needed to know what was motivating Foley so he tasked Karl Allerd (Allan Havey) to find out. Allerd came back with the requested information but it was bad news. Foley had been diagnosed with terminal cancer and given just weeks to live. With nothing to lose he decided to make going after Chuck his final business.

Chuck spoke to Wendy about the problem and his father’s suggestion. Wendy shot that straight down and made it very clear that letting Foley go public about their bedroom activities could simply not happen. She told Chuck he had no choice but to withdraw.

Meanwhile, at Axe Cap a tip came in that there was going to be an explosion at a natural gas facility. The race was on to stealthily dump all of their natural gas positions to prevent a serious loss. The office was pumped and ready to proceed with Axe’s instructions but when the market opened everything at Axe Capital went offline.

IT Greg (Ryan Barry) was summoned and he initiated a reboot of their systems but nothing would work. They had been victim of a targeted cyber attack. Axe was certain that Andolov (John Malkovich) was behind the attack but there was no time to worry about that for now. It was time for the office to go old school.

A supply of burner phones was dealt out and the staff were told they would need to make calls to traders. That might sound simple but they were all so reliant on the Internet that the task fell to Axe and Wags (David Costabile). They began making calls and promising favours to the various traders. Meanwhile, Taylor (Asia Kate Dillion) and Mafee (Dan Soder) began to take advantage of the situation in order to make Axe lose more money.

Earlier in the episode, Axe spent some time with Rebecca Cantu (Nina Arianda) and the test drove the latest sports car. They cost $130k each so naturally Axe bought two, with one being for Rebecca. She had to head off because she’d booked a zero gravity flight on the vomit comet for $160k.

With the Andolov situation, Axe needed to ensure that Chuck got the Attorney General position. He had to ask Rebecca to cancel her flight and instead help broker a deal. She did as requested, secured a payout for an ousted CEO and grabbed three board seats.

After his chat with Wendy, Chuck decided to throw in the towel. He had Ira (Ben Shenkman) write a speech and called a press conference. However, as he’s about to start speaking he changed his mind and put the speech away. Instead he spoke from the heart and said he needed to be honest so the public can trust him. Instead of letting Foley use it as ammunition, Chuck came right out and said he enjoys sadomasochism with his loving and consenting wife. It was a brave move and it worked.

Wendy on the other hand was completely humiliated and destroyed. Chuck betrayed her and she stormed out of Axe Cap. She was furious and told him that she was done with him. Taylor later video called her and offered their support.

At the end of the episode, Axe turned up at the airport to see Andolov off. He said that the moment Andolov reached Russia he would get his assets unfrozen as a goodwill gesture. They each agreed to stay out of each other’s way in their own countries.

Can’t wait for the next episode? Check out our preview of Billions 4×05 A Proper Sendoff.