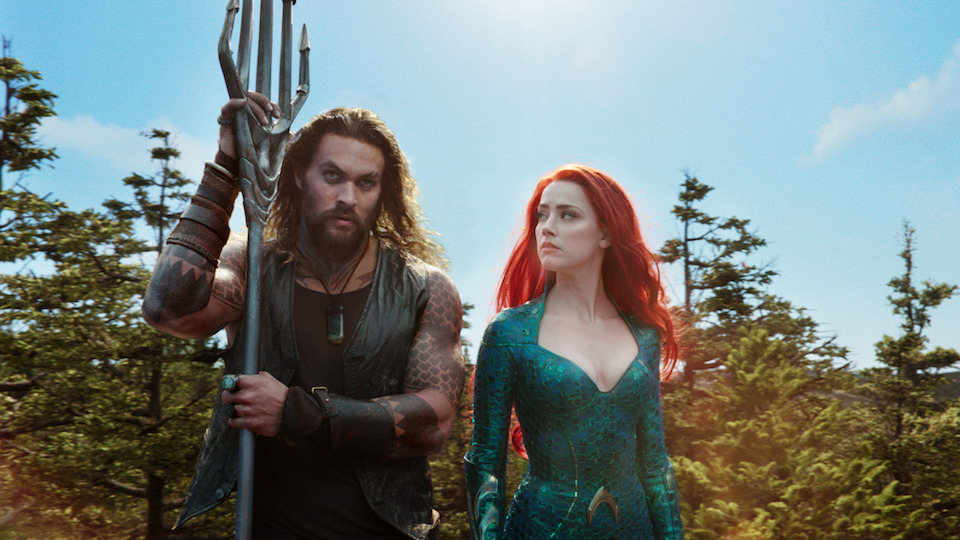 If there was an award for the most amount of movie crammed into one single film, then Aquaman would win hands down. In his attempt to bring this much mocked and most unlikely of superheroes to the big screen, director James Wan has held nothing back in the process. Over two hours and twenty-three brain-frazzling minutes he gives us frickin’ sharks with armour, an octopus playing the drums, and a goat doing a double take. They aren’t even the weird bits.

But make no mistake, this is vibrant, fast-paced, silly, colourful, and balls-out fun filmmaking from Wan. None of which are terms usually associated with the DC movies of the Snyder-verse. The tone is wild, switching in almost every scene between bonkers, irreverent, melodramatic, and grandiose. But crucially, Wan knows it, and so do the cast. So even with every conceivable madness happening throughout the film, it somehow just keeps zipping along, tongue firmly in cheek.

After a couple of less than inspiring appearances in Batman v Superman and Justice League, Aquaman/Arthur Curry (Jason Momoa) is finally given a proper origin story with this film. Riffing on everything from Arthurian legend, Shakespeare, Greek tragedy, Norse Mythology, all the way to The Karate Kid, Gladiator, Ron Howard’s Splash, and everything in between, the plot (like everything else in Aquaman) is overstuffed to the extreme.

The son of a lighthouse-keeper and a Queen of Atlantis (Nicole Kidman), Arthur has chosen a life on the surface, where has lived all his life. He spends his days getting drunk with his dad (Temuera Morrison), partying with the locals, and occasionally doing the odd bit of superhero action such as demolishing a crew of pirates who have commandeered a nuclear sub.

Meanwhile in the underwater kingdom of Atlantis, King Orm (Patrick Wilson) is planning to go to war with the human race. In order to achieve this he must unite the seven kingdoms under his banner, by politics or through force. Arthur is seen as the only person who can stop Orm, and so Princess Mera (Amber Heard) journeys to the surface to recruit him. Needless to say he is reluctant to get involved. But before he can challenge Orm he must first find some mystical trident, which will unite the peoples of Atlantis behind him.

Between the machinations under the sea, the bizarre quest movie happening on the surface, and a tedious subplot involving Aquaman’s comic book nemesis Black Manta, it’s all a bit much to be honest. Thankfully James Wan, as he showed in Fast & Furious 7, is a master of insane action. The CGI set pieces in this film are a visually bonkers delight. Everything is so over the top, but in fairness I think it had to be. Aquaman is an inherently ridiculous character, and I think you either commit and embrace the silliness, or it just won’t work.

Jason Momoa gets it, and he is clearly having an absolute ball. Unshackled from the terrible script and dude bro-isms he was lumbered with in Justice League, he is free here to give the character some of the charm and humour it desperately needs. A shout out must also go to Patrick Wilson, who hams it up to delirious levels.

So yes, it is completely nuts, visually, plot-wise, the performances, even the score which vacillates wildly between rock riffs, soaring orchestras, and Vangelis style synths. But it’s never anything less than entertaining. Yes it’s overlong, and a bit silly, and goes off on seemingly bizarre tangents that end up becoming part of the main plot, but I can’t imagine anyone sitting down to watch this and not having an absolute blast.

Also, if special features are your bag, then prepare to be very happy, because the Aquaman blu-ray comes with more than 80-minutes of bonus features. Becoming Aquaman focuses on Jason Momoa in a fun mix of behind-the-scenes footage and exclusive interviews shot before, during, and after the movie.

Going Deep into the World of Aquaman is the main making-of documentary on the disc, looking at all aspects of the movie, with exclusive access to the cast and crew. James Wan: World Builder focuses on the man at the helm of this insanely ambitious film. This short featurette explores some of the challenges he faced in bringing this film to life.

The Dark Depths of Black Manta is a short piece about Aquaman’s deadliest foe from the comics. Heroines of Atlantis features interviews with Nicole Kidman and Amber Heard talking about their roles in the movie and the roles their characters play in Arthur/Aquaman’s life.

Villainous Training is a short feature about Patrick Wilson and Yahya Abdul-Mateen II preparing for their epic physical battles with Jason Momoa. A Match Made in Atlantis is a cute piece focusing on Momoa and Heard, and how their off-screen friendship added to their on-screen chemistry.

Atlantis Warfare looks at the astounding special effects and stunt work in the film’s finale. It would have been nice had this been a bit longer and gone into more detail, but it’s fascinating all the same. Creating Undersea Creatures is a more detailed look at the incredible work done by the film’s art department.

Aqua-Tech is another featurette with the director James Wan, exploring some of the technology and techniques they developed for the film, to ensure the visuals were as bold as the storytelling. I will never not be astonished by the genius of these people.

There are three detailed Scene Breakdowns for some of the most exciting action sequences in the film. In Kingdom of the Seven Seas, Dolph Lundgren talks us through the history and movie mythology they created for Atlantis. And last but by no means least, is a sneak peek at Shazam! – the latest entry into DCs Extended Universe.

John Parker
John is a freelance writer and film reviewer for Entertainment Focus.
Previous article
My Spy: get your first look at Dave Bautista’s upcoming comedy
Next article
The Addams Family: teaser trailer and poster released for upcoming animated reboot