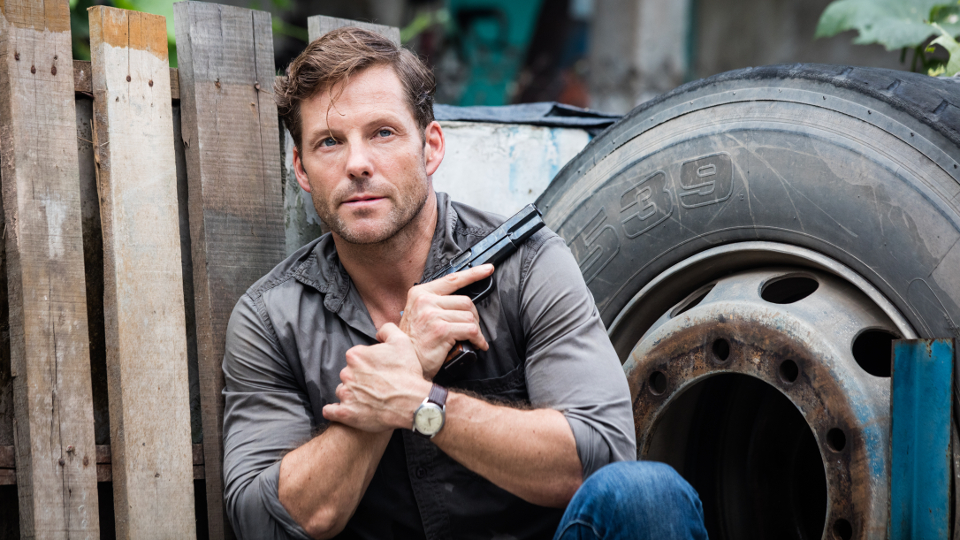 The sixth episode of Strike Back: Silent War (season 7) saw the team try to escape the wrath of the vengeful drug warlord Zaza, while recovering the suitcase nukes.

At the end of last episode, Novin (Alin Sumarwata) and Zarkova (Yasemin Allen) managed to escape Zaza (Chris Obi) by stealing a seaplane. Before they got away they took some bullet damage which left them leaking fuel.

This episode opened up with them still airborne but due to lack of fuel the engines soon cut out. That’s when Novin revealed she’d never landed a plane before. She decided to head for the river as that would be the safest place to ditch the aircraft. She managed to glide in and after a bumpy landing they were down safely. Novin then said she’d always wanted to fly a plane! Zarkova complained that they didn’t land closer to shore because they now had to swim. Back on land they were picked up by the local police.

Meanwhile, Zaza got a report from one of his men. He showed him photographs of Section 20 that they’d picked up on their camera network. Zaza said to put a price on their heads because he wanted them all dead.

Mac (Warren Brown) and Wyatt (Dan MacPherson) had ditched their car and were now on foot with about three bullet clips left between them. They were being pursued by the cartel who were heavily armed. They decided to get moving and began walking down the river to avoid being tracked so easily. Mac was still bothered about why Wyatt killed Dagon (Fish Chaar) and felt he was hiding something. He pushed Wyatt on it and the pair almost came to blows before one of the gunmen caught up with them. Wyatt distracted him while Mac crept behind him and smashed his head in with a rather large rock.

They asked a local man for help and he led them to a small village with a telephone. Wyatt had a drink with the man while Mac made a call to Coltrane (Jamie Bamber) who told him that local police had picked up two women who he presumed were Novin and Zarkova. They were being taken to a local prison and Chetri (Varada Sethu) was looking into it. Coltrane asked them to head there while he worked on a contingency plan.

Mac found a skull mask and submachine gun and challenged the man about it. Wyatt pulled his gun on Mac and the pair argued. Wyatt was convinced that the people were good and told a story about Task Force 18 in Iraq when they killed everyone. After lowering their weapons, the man explained that Zaza was good to them.

Moments later they were under fire from several gunmen. They returned fire while looking for a way out. They spotted a car so Wyatt laid down suppressive fire and told Mac the truth about killing Dagon. Mac ran to the car and hotwired it while Wyatt made his way over. An explosion knocked him off his feet but Mac helped him up. As they sped off, everything exploded.

At the prison, Novin asked to speak to the person in charge. The police confiscated the hard drive with the nuke intel and then hosed them down. They were then changed into prison clothes and taken to a cell. Novin pushed a guard back and he smacked her in the face with his baton. The prison warden made a call to Zaza to tell him they had two of the soldiers he was looking for. He said he would come for them but she said if word got out it would be bad for her. She suggested that maybe they could have an accident, Zaza agreed but only if she made sure it hurt.

Novin and Zarkova were escorted to the prison yard. There they found three female prisoners armed with weapons waiting for them. A fight broke out and Zarkova was overpowered by two of the women. Novin grabbed the leader and said if they hurt Zarkova she’d kill her. She offered them a way out instead and they let Zarkova go. The prison guards were scrambled and another fight broke out. One of the women was killed but the rest took out the guards and Zarkova grabbed a set of keys.

They headed for the warden’s office as more police were scrambled. Novin fought one of them while the others went after the intel. He was wearing full riot gear which gave him a huge advantage. Novin put up a good fight but in the end had to stab him.

Zarkova disarmed the warden and was upset to find they had destroyed the intel on Zaza’s orders. Novin caught up with them and they took the warden hostage. They got through a gate and locked it behind them. One of the police fired a shot and killed the warden. They fled into another building which was used for visitors and found Mac and Wyatt. The four escaped in the car the boys stole.

Meanwhile, Coltrane was working on his contingency plan with Chetri. She guided him to where he’d find Gillespie (Victoria Smurfit) and stopped her car. Chetri had intercepted a message from Gillespie to Zaza. She claimed she was working with him as a way to control him. Their chat was cut short as a gunmen arrived on the scene.

The took out some of the attackers but more began arriving. Chetri monitored the area as they went inside a building. Gillespie explained how she had used the DEA slush funds to back Zaza’s takeover of the cartel. She said the operation had given her so much information that head office thought she was a superstar. Coltrane asked about the nukes and she gave him a location. They made their way to an exit but Gillespie locked Coltrane inside and apologised as she left him.

Coltrane was attacked by two men with machete’s and had to fight them off. The second he fought with a lamp and then strangled him with the electrical cord. Outside, Gillespie was hit by a car driven by Pavel (Alec Newman) and he abducted her to direct him to Zaza. Comms went down so Chetri came to support Coltrane. Soon after Mac and Novin arrived on scene and extracted them.

Section 20 geared up, including Chetri, before heading after the nukes. Before they did, Wyatt confessed to Coltrane about Gillespie asking him to kill Dagon for the DEA. Coltrane asked if he had anything else to add and Mac covered for him saying he had no choice but to kill him. Coltrane said that if they couldn’t recover the nukes that they would need to destroy them and that might mean they don’t make it back alive.

Pavel and Gillespie arrived at Zaza’s compound. Pavel was there to buy the nukes back. Outside, 20 began their assault in pairs and co-ordinated an attack on the guards. Zaza thought Pavel was behind it and grabbed him at gunpoint. Gillespie grabbed a rifle but was shot by Zaza as Pavel ran off.

Pavel ran to Wyatt and said he was there to help Zarkova finish the job so she could come home. He also said that he knew where the nukes were. Mac found Gillespie but she was in bad shape, he left her sat on the floor bleeding out and gave her some more ammo. She killed a couple of Zaza’s men before one of them killed her.

Zaza pulled a shotgun on Novin and Mac pulled one on him. He offered to give up the nukes and said he had keys for the truck. He refused to throw them and said he’d hand them over. As Novin moved toward him he fired and they all fell to the floor. Novin threw her C4 at Zaza as she and Mac ran. He held it as the last seconds ran down and it exploded killing him.

Mac got to the truck and found the nukes in the back. Coltrane ordered him to move them out as a priority. Zarkova jumped in with him but spotted Pavel under fire. Against orders they went to his aid and then the three of them got back in the truck and drove off. As Wyatt celebrated, Pavel said he was a good man for saving him. He then shot Wyatt in the side, kicked him out the truck and drove off with Zarkova screaming at him. He told her to trust him as he was following orders.

Wyatt made his way on foot and avoided the cartel. He hid under a bridge and tried to patch up his wound. Then he called and left a message for Mac explaining about Pavel and giving his co-ordinates. The call disconnected and he called his wife and apologised for the past. As he hung up Mac and Novin arrived.

Zarkova pulled a gun on him and made him kneel. He told her to call Moscow which she did. He told her to ask for Directorate Office 338. She said after the call she wanted him to tell her everything. He said that after the call she would salute him and call him sir. She reported that he had confessed to the murder of Beshnov. However, when she came off the call she holstered her weapon and like he said she saluted him and called him sir. It looks like Pavel is running things now.

Can’t wait for the next episode? Read our Strike Back: Silent War episode 7 preview.