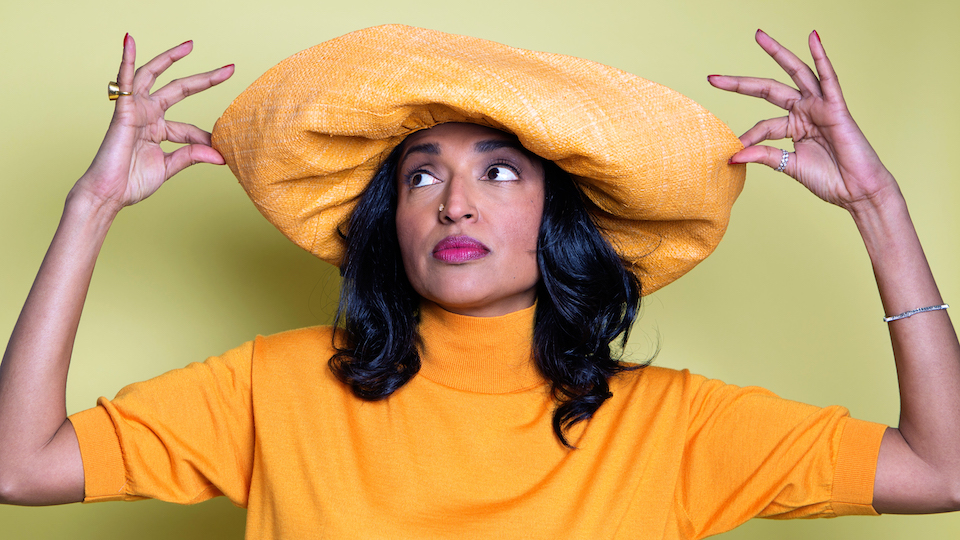 Comedian Sindhu Vee was born and raised in India. She has earned degrees from Delhi, Oxford, McGill and Chicago Universities. She also has half a PHD. After a very short stint as a Yves San Laurent model, Sindhu had a successful career in investment banking. Then, in her early 40s, Sindhu decided it was time to change direction and to make her parents proud by starting a career in comedy.

The award-winning comedian, who only started gigging properly in 2015, has already racked up an impressive range of TV credits including BBC’s Live At The Apollo, QI and Have I Got News For You. Sindhu’s sell-out debut Edinburgh show Sandhog earned her a nomination for Best Newcomer at 2018’s Edinburgh Comedy Awards. Sindhu has just finished her UK tour but is set to return to London on 18th April at The Underbelly Festival Southbank for one night only, followed by another run at Soho Theatre between 6th – 16th May 2019.

Sindhu Vee has three kids, including two teenagers, with her Danish husband and owns a gigantic Labrador. Sandhog is about how exhausting and complicated it is to love our children, spouse and parents, but how inescapable the urge is to love them as fully as we can. It’s about being the generation responsible for both the kids and ageing parents.

When she was young Sindhu was brought up by an Ayah (an Indian nanny) and wore hand-me-downs and had a stammer into her early 20’s. Sindhu asks whether she should she just appreciate what she has? We can’t choose our kids or our parents and ties to them feel primordial…but we can choose our spouse. The show also looks at some home truths on marriage. Those ties feel highly questionable at many points once the bloom of new love is gone (somewhere between 24 hours – 24 months after the wedding!). Yet many people choose to stay married. Why? Divorce has never been so easy.