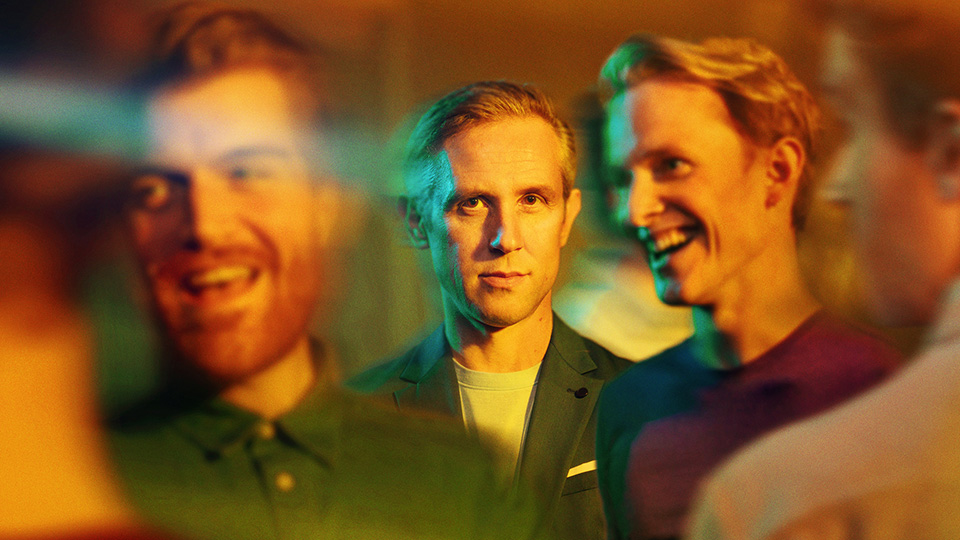 After appearing in the original production of Tumulus at VAULT 2018, actor Ian Hallard is part of the cast for the play’s upcoming run at Soho Theatre in London.

Starring opposite Ciarán Owens once again, and new cast member Harry Lister Smith (God’s Own Country), Hallard is currently in rehearsals for the show, which opens next month.

I caught up with Ian to find out more about the show, discuss the challenges in bringing it to life, and to talk about how he got involved.

Hi Ian. How are you today and where does this Q&A find you?

I’m well, thanks. I’m at home and just about to take the dog out for a walk.

You’re starring in Tumulus at the Soho Theatre. What’s the play all about?

It’s a “queer noir”: a murder mystery thriller set against the backdrop of the London chemsex scene. Anthony – a thirty-something gay man – discovers an ex has been murdered and decides to investigate. His journey takes him into some unexpected, unsavoury and even dangerous places.

The show features three actors playing over 40 roles. How challenging has that been?

It’s been fun. We’re using state of the art voice-changing technology, so that’s been exciting to experiment with. But I’m also showcasing a variety of regional accents, so I get to be a straight lad from Yorkshire, an Australian sexual health counsellor and an elderly Scottish lady. Harry Lister-Smith (who’s new to the production) and I share all the multi-roling between us. He plays all the young, twinky characters: rather depressingly, I play all the old ones.

What drew you to Tumulus and how did you get involved?

I know Chris Adams, our brilliant writer, and I acted with his husband, Tim, a few years ago. Chris sent me the script and I thought it was great. There have been several chemsex plays in the last few years, so it was refreshing to read something that gave a perspective on the whole chemsex phenomenon without it being the entire raison d’etre of the play. It’s very clever in that it gives an unusual ‘queer’ twist on a typically heteronormative genre, and also reflects some of the institutional homophobia that crops up from the likes of the police when they become involved with chemsex cases.

You star opposite Ciarán Owens. What’s he been like to work with in rehearsals?

Well, as I’m just about to start working with him all over again, it would be awkward if I delivered anything less than a glowing tribute wouldn’t it? Happily, I can say in all honesty, that Ciarán is a fantastic actor and a delightful human being. He had a mammoth task in the original incarnation of the show due to the sheer amount of text he had to learn in such a short time, but he managed it with aplomb.

What would you say has been your biggest challenge in regards to this production?

It’s an incredibly ambitious undertaking. We had two weeks rehearsal last year on a piece of new writing. And our director Matt (Steinberg) definitely decided not to make it easy for us! All three actors are on stage the whole time and as well as the voice-changing technology, we create a whole range of physical sound effects as well – we’re essentially Foley artists, like in a radio drama. I can admit this now, but at our first performance at the Vaults Festival last year, there were moments when I was sitting on stage thinking: “I have absolutely no idea what happens next” and just hoping that something would pop into my head in time. It was like one of those nightmares that actors have. I’m confident that I’ll feel more prepared this time!

Murder mysteries are incredibly popular with audiences. What do you think it is about them that draws people in?

They’re fun puzzles, aren’t they? You can either try and compete alongside the detective, or just be entertained and surprised when the killer is revealed. I devoured Agatha Christie novels as a kid, so it’s a real career highlight that I got to work on some of the ITV Poirot’s both as a script associate and a writer.

Nothing confirmed as yet. I’m focusing on ‘Tumulus’ for the foreseeable future and then seeing what comes along next!

Why should people come and see Tumulus?

It’s a thrilling rollercoaster ride through contemporary London, with a witty script and fresh and innovative staging. You might learn something about what chemsex culture is and the effect it is having on the men who engage with it, but you won’t feel lectured to. If you like ‘Murder She Wrote’, Dashiell Hammett stories and men wearing microscopically tiny shorts (which apparently are something of a uniform on the chemsex scene), then this show is definitely for you.

Tumulus runs at the Soho Theatre from 16th April to 4th May 2019. For more information and to book tickets, visit www.sohotheatre.com.