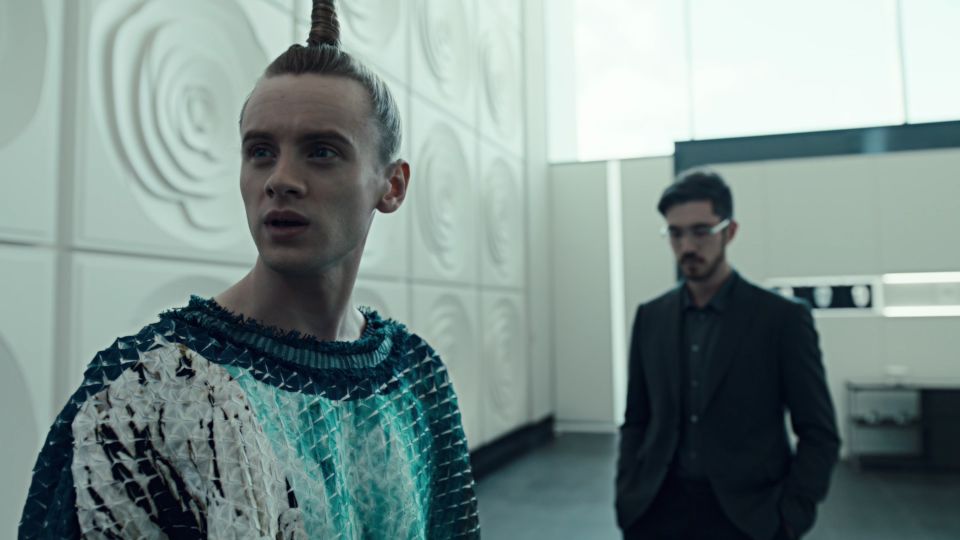 Episode 4 begins with us visiting the past and the birth (if Gods are born) of Tech Boy (Bruce Langley). It opens with a young boy feverishly playing Pong when his father interrupts him to practice the piano, playing Bach. The boy is clearly a prodigy but as soon as he’s finished on the piano he’s straight back onto Pong.

Skip forward several years and the, now young man is at College and is inspired to write a computer program that follows Bach’s style of breaking musical rules. He’s more interested in the tech than the music itself (you can probably tell where this is going now). The next scene is at his fathers funeral, as the music plays we see Tech Boy begin to form as he now has his first worshipper.

Mr Wednesday (Ian McShane) continues his attempt to get Shadow (Ricky Whittle) and Laura (Emily Browning) to forget about each other by sending a mystery seductress to Shadow in the night. He can’t help himself and ends up sleeping with her. Once they’re done she tells him to forget about Laura.

In the morning Shadow and Mr Wednesday hit the road to attend a meeting with the god of money.

As they pull away from the funeral home Bilquis (Yetide Badaki) arrives looking for Shadow. Nancy (Orlando Jones) is also there and delves into Bilquis’s side swapping antics. He does, however, manage to convince Bilquis to stay on the side of the old gods with a rousing speech.

Meanwhile, Mr World (Crispin Glover) sends Tech Boy off to rectify his errors in the previous episode, he did nothing to stop the death of Argus, remember!? Mr World threatens that if Tech Boy fails it will be the end of him. Tech Boy revisits his first believer who is now a CEO at a top tech firm. Mr World interrupts and the result is the end of Tech Boy (or at least so we are lead to believe at the moment).

Mr World also wants to meet with Money who has some very interesting gatekeepers. His gatekeepers are in fact three candy selling girl scouts who eventually allow him access. Mr World finds himself at the same meeting as Mr Wednesday and Shadow but Money is unwilling to join either side.

That’s pretty much it for this episode. Once again it had a very leisurely pace and it’s easy to feel like not a lot happened. This season certainly seems to lack the excitement and humour of season 1, it is definitely a much more serious affair. We didn’t learn any more about the biggest mystery in the show, why Mr Wednesday needs Shadow.