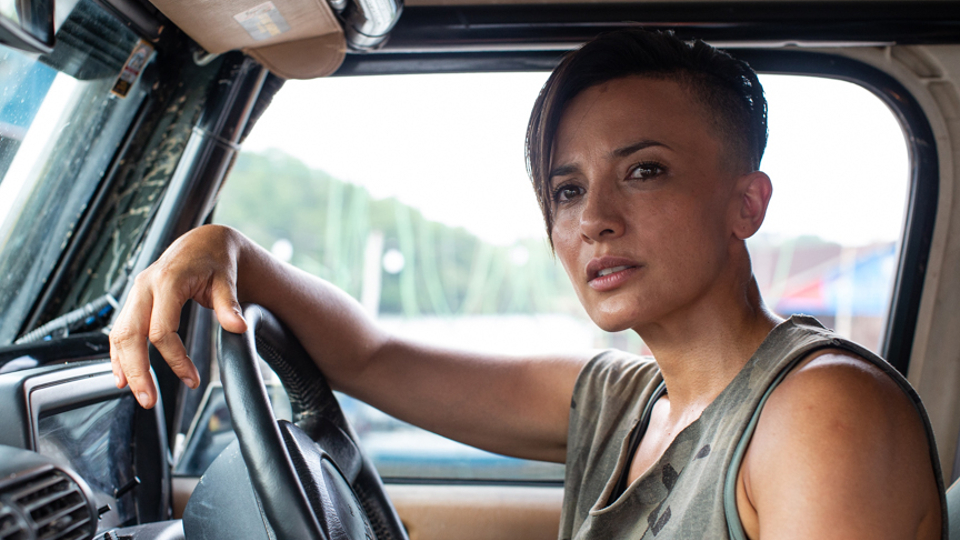 The fifth episode of Strike Back: Silent War (season 7) saw the team head to the Myanmar jungle, still on the trail of the suitcase nukes after they were stolen by a drug lord.

The episode opened up in the Golden Triangle in South East Asia. The driver who got away with the nukes last episode was driving his truck. He looked to be having some difficulty and it seemed that he’d been attacked. After driving erratically for a short distance he crashed.

Vehicles appeared further down the road, apparently in pursuit of the driver. He reached into the glove box and grabbed a pistol. Three vehicles pulled up, one with a mounted gun turret. A drug lord known as Zaza (Chris Obi) got out and said the driver must have important cargo to take a risk going through their territory. As his men prepared to hang the driver, Zaza discovered the suitcase nukes.

At Yangon International Airport, Myanmar Colonel Beshnov (Marek Vasut) arrived to be met by Pavel (Alec Newman). He was furious and said someone had been siphoning funds from Alpha Group. Pavel said that Zarkova (Yasemin Allen) was close to finding the nukes but the Beshnov said that she stole them and was Kingfisher.

Back at base Chetri (Varada Sethu) ran comms while Zarkova prepped some weapons. Meanwhile, Coltrane (Jamie Bamber), Novin (Alin Sumarwata) an Wyatt (Dan MacPherson) went to meet with DEA agent Lauren Gillespie (Victoria Smurfit). They asked about the crashed car and driver who was found hanging. Gillespie explained that he was on a route controlled by Zaza and that he couldn’t be touched.

Coltrane proposed a deal that if they got the nukes back, DEA could take the credit. Wyatt asked what Zaza used for comms and Gillespie explained that he had his own relay station for private communication. If they took it out Zaza would be forced to use radio to radio comms which they could eavesdrop on. Gillespie also had a map of where all the relays could be found.

Chetri spotted possible enemies closing on their position. Gillespie wasn’t expecting anyone and Wyatt looked out to see armed men arriving. Novin asked the barman if he had a weapon and he gave her a baseball bat, not the most useful counter to shotguns and semi-automatic assault rifles. They began firing on the bar so the team left via the back door. The gunmen followed and Novin took two out with the bat. The leader told Gillespie he wouldn’t let her take him in like his brother so she shot him dead.

Mac (Warren Brown) and Zarkova joined Wyatt and Novin and they made their way through the jungle in search of the relay stations. They tried to blow up the first one they found but it survived the blast. The noise alerted Zaza’s men who turned up heavily armed. The team hid and then took them out. Novin jumped in their truck and used the mounted gun to destroy the relay.

Zaza was furious that the relay station had been destroyed and his number two, Dagon (Fish Chaar) said they would need to switch to radio comms. Zaza didn’t think anyone he knew would be behind the attack. Back at base, Chetri scanned local comms for chatter. Zarkova gave up some Russian frequencies so they could also monitor those. Chetri got a hit on comms from Dagon who ordered protection of their other relays.

Chetri gave the team co-ordinates to find Dagon and Coltrane sent Mac and Wyatt to grab him, with orders to do it quietly. Before they left, Gillespie asked Wyatt to do her a favour and eliminate Dagon due to work the DEA had done with him previously. She offered to redact Wyatt’s file if he obliged but threatened if she leaked it his career would be over.

Before they arrived it was revealed that Dagon was sleeping with Zaza’s girlfriend (Alice Hewkin). He removed a necklace that Zaza had given her and dropped it on the floor. Mac and Wyatt moved in as she left, with Wyatt offering to get Dagon while Mac kept watch. Wyatt grabbed him and got him to tell what he knew that Zaza was to sell the nukes for $20 million to al-Shabaab. Wyatt shot and killed Dagon and staged the body with a gun to make it look like self defence. Zaza heard the news and came to visit Dagon. He found the necklace on the floor next to the bed.

The team set up a sting operation to try and intercept the buyer from al-Shabaab. She arrived by seaplane and facial recognition gave a hit of Gabriela Barre (Jade-Eleena Dregorius). As she left the plane, Mac told Novin he was suspicious about Wyatt and Gillespie. Coltrane gave the go to grab Gabriela so Mac and Novin moved in. Mac took out her security detail while Novin tried to talk to her. A fight ensued which left Gabriela dead.

Back at base, Chetri analysed the phone take from Gabriela and found it contained instructions for the buyers. Frustrated, Zarkova suggested just going in after Zaza. Gillespie said that was a pointless plan. Coltrane decided to send in Novin instead posing as Gabriela.

Before heading out to the meet Mac decided to have a snoop around in Gillespie’s room. He found that she had files on Wyatt which validated his suspicions. Gillespie caught him in her room so he told her the truth. She told him some of the things she knew about his past and tried to seduce him. Mac turned her down.

After some waiting, Zaza arrived for the meet. The team were on standby as Novin arrived posing as the buyer. Zarkova noted the heavy presence with a ring around the casino. Novin met with Zaza and gave him $80,000. He wanted the next $10 million transferred so Novin pretended to authorise it, when in fact she was using a device Chetri gave her to download the nuke location from Zaza’s device.

Zaza began to get twitchy waiting for the money to appear in his account. He spotted Mac watching him and Novin and wanted to know who he was. Novin managed to keep him occupied but the device crashed at 90% complete. Chetri decided they should have enough data so Coltrane ordered them to leave. Zaza spotted a man talking to his girlfriend and bashed his head in with an ashtray before starting on his girlfriend. Novin stepped in to break it up as Zaza got an alert with her real identity and dragged her away.

As usual things got messy fast and that meant Mac and Wyatt getting into another gunfight. Zaza dragged Novin outside and pulled a gun on her but was stopped when his girlfriend came out and shot him. She tried to steal the $80,000 off him but got shot in the crossfire and died. Mac and Wyatt stole a truck but were pursued by gunmen on motorbikes.

Meanwhile, Novin and Zarkova tried to escape on foot. They made it to the docks and decided to steal the seaplane. As they began to taxi, Zaza and his men arrived and began shooting. They took some damage but managed to get airborne and evade a rocket that Zaza fired.

At the end of the episode, Beshnov was going through all the evidence to find out if Zarkova was against them. He discovered that some of it pointed to Alpha Group before she joined. That’s when Pavel shot Beshnov through the stomach and then again through the head. It seems he’s been the one behind everything all along!

Can’t wait for the next episode? Read our Strike Back: Silent War episode 6 preview.