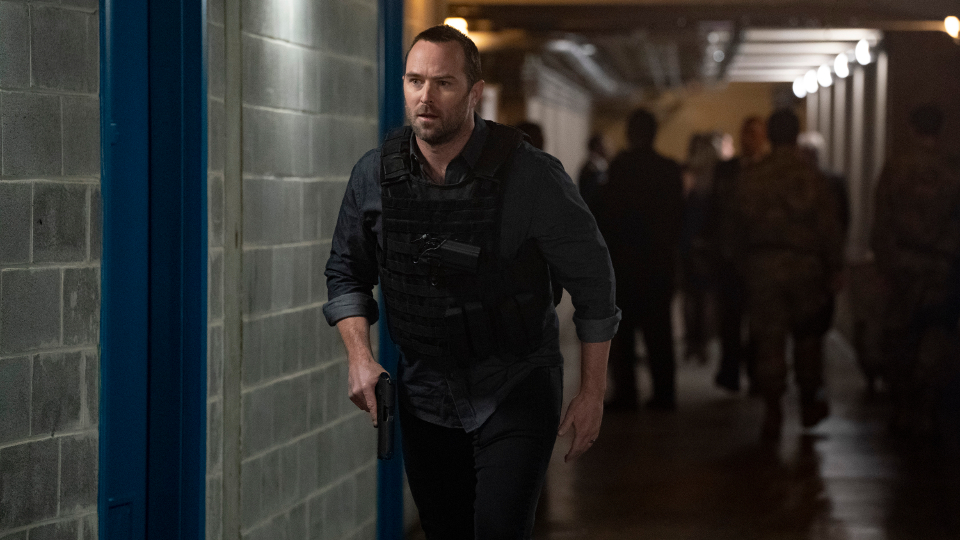 On the latest episode of Blindspot, the team rushed to keep a deadly weapon out of a terrorist’s grasp.

The episode began with a gang robbing an armoured truck. They knew what they were looking for and made off with a box once they had checked its serial number. At the FBI, Rich (Ennis Esmer) unveiled a board game that he’d created based on the team. He’d brought in the prototype for them to see and it looked rather complex with multiple levels, cards, dice and even 3D printed figures of the team.

The key that Shepherd left clues for opened up a Sandstorm stash. Inside it was full of items that meant something to Jane/Remi (Jaimie Alexander). These triggered memories from her past and Jane later felt that it was designed to trigger Remi again. It also made her question her past actions and feel an incredible sense of guilt over what she had done.

Patterson (Ashley Johnson) and Rich looked into a tattoo that featured the same serial number as the stolen box. Solving this latest puzzle required use of the periodic table and they concluded that the stolen box probably contained plutonium.

A little out of their depth they called in a man named Dave Kirkpatrick (Peter Oldring) who was a weapon specialist. Dave was an odd chap with a unique sense of humour. Rich used the dark web to try and purchase the plutonium but someone else was a step ahead. They figured out where the sale would take place and cooked up a plan that involved pretending to be those selling it.

Patterson and Dave intercepted the real device so that he could make it safe. While they did that, Jane and Weller (Sullivan Stapleton) took a decoy to the buyers, Greta Smalls (Angela Gots) and Cameron Gibbs (Tom Pelphrey). Things took an unexpected twist when it turned out that Gibbs used to be friends with Remi. Fortunately Jane now has access to the memories so could recall their history. What Gibbs didn’t know is that Remi pretended to be his friend while using him. Instead he blamed the military and he planned to use the device as revenge.

After Dave made the device safe, they managed to keep Greta and Gibbs distracted while they switched it for the decoy. Thinking on her feet, Jane told Gibbs she wanted in on his plan so she could keep an eye on the plutonium. He agreed and left with Jane while leaving Weller with Greta. The plan had been to kill the sellers but Gibbs tricked Jane and locked her in a room. Before leaving he apologised that Weller would be killed by Greta.

After Gibbs left, Jane managed to escape and Weller managed to overpower Greta. They pushed Greta to give up details of what Gibbs was targeting. He planned to bomb a convention center where a lot of military were meeting. Despite the device being disabled he still have the components to make a dirty bomb.

At the convention center, Jane and Weller split up to search for Gibbs. Jane tracked him down to a service tunnel and hinted at her location during a conversation with Gibbs so Weller could find her. Knowing that it was essentially her fault that Gibbs was angry at the military, Jane decided to tell him the truth. He was upset and couldn’t believe she’d lied and manipulated him. He felt the best punishment was to detonate the dirty bomb, killing them both and lots of innocent people. Weller arrived just in time and put a couple of bullets in Gibbs, killing him. Upset at the whole situation, Jane wondered if she could keep doing her job.

Elsewhere in the episode, Keaton (Chad Donella) finally awoke from his coma. He could vouch for Zapata (Audrey Esparza) and said had proof of everything that he had tasked her with. This was good news for Zapata but she wasn’t happy with him taking the fall for everything. She wanted to find a way to clear them both. Reade (Rob Brown) wanted to know from Keaton why he was kept in the dark about Zapata and he explained because it was too personal and that Reade may have changed her mind.

At the end of the episode, CCTV access at the Sandstorm stash revealed an unknown person had accessed it a day before the FBI. Could it be an unknown Sandstorm operative or maybe even a character who we thought dead?

Can’t wait for the next episode? Read our Blindspot 4×16 The One Where Jane Visits An Old Friend preview.