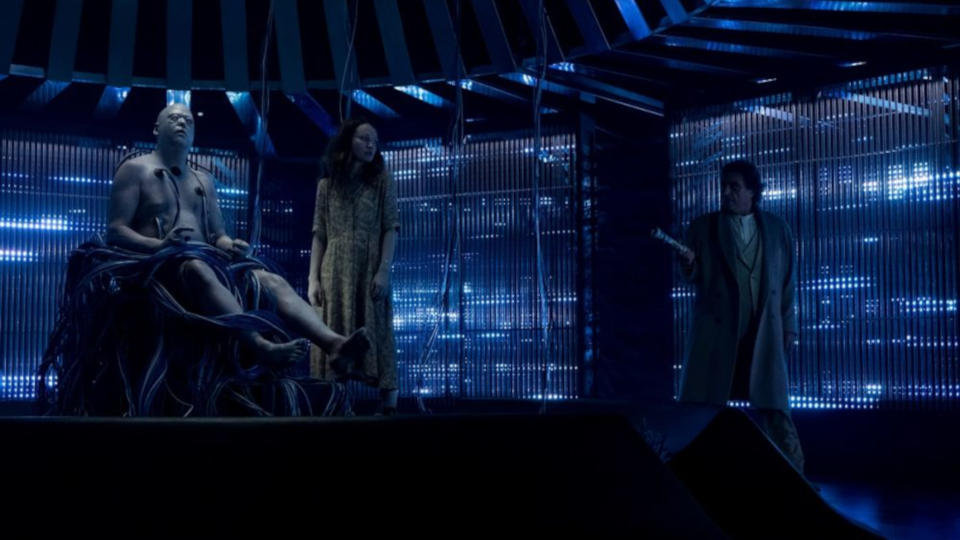 Muninn, the third episode of American Gods season 2 is a sombre affair and the whole episode feels very melancholy throughout, even the antics of Mad Sweeney (Pablo Schreiber) don’t manage to lift the mood all that much.

The episode opens in the aftermath of the train crash from the end of episode 2. Laura (Emily Browning) is literally in bits and Mr Wednesday (Ian McShane) has Mad pick up her bits and put her in the boot. They actually leave Shadow (Ricky Whittle) to his own devices in trying to escape the wrecked train with Mr Wednesday saying “the quickest way for him (Shadow) to get where he’s going is sometimes the longest”

We then head over to the funeral home run by Ibis (Demore Barnes) where they are stitching Laura back up. Ibis actually eats a bit of her referring to old rituals. Laura then reacts violently when Mad calls her a c*&t and headbutts him through a window. All Laura seems to want to is to regain her humanity and Mr Wednesday convinces her to go with him to track down Argus who he promises can recharge the magic coin that is keeping her ‘alive’ so to speak.

Shadow manages to make it to a service station where he is caught trying to scam the checkout assistant. He ends up getting a lift with the girl who caught him, Sam Black Crow (Devery Jacobs). She turns out to be a very spiritual, headstrong young woman and she and Shadow have some very introspective conversations.

We get our first glimpse of New Media (Kahyun Kim) and she and Tech Boy (Bruce Langley) set off to find Argus to get him to follow his orders correctly. It seems Argus has been playing both sides.

Mr Wednesday don’t know where Argus is and have to travel around making various sacrifices and following a trail of corpses to track him down.

We see Salim and the Jinn enter a strip club which houses a cannabis farm in the back. They are collecting an instrument of death (it’s literally a guitar case) but we are left none the wiser as to what is actually inside.

Tech Boy and new media make it to Argus first. After Tech Boy berates him for not doing his job, New Media steps in and a very strange ‘sex scene’ ensues between her and Argus. Bear in mind that Argus is half man half machine with lots of phallic looking probes on the end of cables and you get the idea!

Mr Wednesday and Laura then arrive and Laura is talked into killing Argus as Wednesday has already figured out that he is being double-crossed. Laura kills Argus and gets her lucky coin recharged which will keep her body from rotting to pieces for some time to go.

Throughout the episode, we do get some comic relief from Mad Sweeney. He’s trying to make his way to New Orleans but has no transport. He starts with stealing a car only to find a vicious dog in the back. He then tries to steal a boat which he blows up. Finally whilst hitchhiking he ends up on the tour bus of a Christian rock group.

The final scene shows Shadow arriving at the Ibis’ funeral home where he demands some answers from Mr Wednesday. You won’t be surprised to hear that he doesn’t get any and the mystery around Shadow continues.

To sum up, this episode was hard work. The story didn’t really move on all that much and I found New Media to be a rather annoying character. As I said at the start, even Mad’s antics couldn’t lift the sombre mood.

Here’s hoping more happens in episode 4: “The Greatest Story Ever Told” which airs on 1st April.