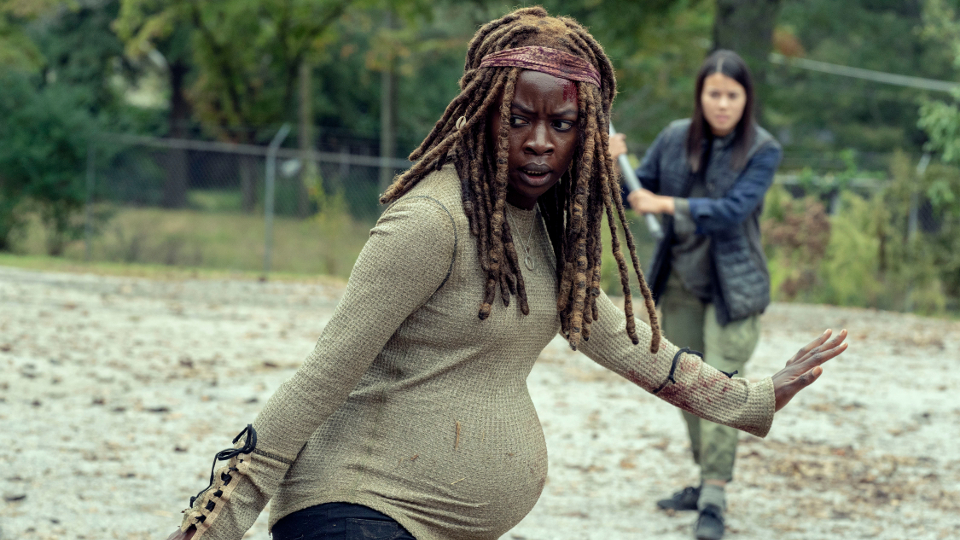 On the latest episode of The Walking Dead, we found out details of a tragic event that happened at Alexandria during the mid-season time jump.

Last episode, Daryl (Norman Reedus), Connie (Lauren Ridloff) and Dog fled the Whisperers with Henry (Matt Lintz) and Lydia (Cassady McClincy). They then set a trap for them and tried to kill Beta (Ryan Hurst).

Scars focused on Michonne (Danai Gurira) and Daryl during the time jump. The pair never gave up looking for Rick (Andrew Lincoln) and we got to see Michonne find Rick’s pistol in the mud on the banks of the river. She cleaned it up and put it in a box for when Judith (Cailey Fleming) was older.

Time passed and we got to see Michonne still looking for Rick as her pregnancy progressed. She ran into Daryl who was doing the same and he vowed to never stop looking for his friend. This is the time when Daryl was mostly out living on his own.

Back in the present, Daryl arrived at Alexandria with Connie, Lydia, Dog and an injured Henry. The people on the gates weren’t sure about letting them inside so called for Michonne. She was also very wary due to something that happened in the past but trusted Daryl’s word.

Back in the past we got to see a time when a woman called Jocelyn (Rutina Wesley) arrived with a big group of kids. It turns out that Michonne and Jocelyn were best friends when they were younger. Due to this Michonne welcomed them into the community.

Jocelyn’s kids later went out to hunt and brought back game for dinner. Everything seemed ok until the next day when Michonne woke to find blood and one of the community dead. She realised that Jocelyn and the kids were gone, along with lots of supplies and other kids, including Judith. On the ground she spotted bloody footprints and realised that they had left via the sewer.

Back in the present, Henry got his leg stitched up and Michonne had a chat with Lydia. She as good as told her to walk away to keep her friends safe. Daryl had a chat with Judith and she made him think. After Daryl and the group left, Michonne found Judith had disappeared. She confronted Negan (Jeffrey Dean Morgan) to find out what they talk about and he told her that he only tells her the truth. Michonne found a note from Judith in the pistol box saying she’d gone to help their friends and the pistol was gone.

It seems she was running some kind of cult and training the kids as killers to be strong. She had two of the kids, Linus and Winnie, brand Daryl and Michonne with a hot iron in the shape of an X. That explains where those scars came from.

After their ordeal, the pair managed to escape their restraints and decided to split up. Outside, the heavily Michonne found herself faced with Jocelyn and a group of the kids. Jocelyn repeatedly beat her to the ground but Michonne managed to grab her trusty sword and stabbed her friend through the heart.

This left Michonne faced with Jocelyn’s kids who moved in to attack while one called for the kids from Alexandria to be killed. With seemingly no other choice to save Judith, Michonne had to fight and she slaughtered all but Winnie who ran off. Judith was unharmed but saw the gruesome scene.

Rather than show Michonne murdering the kids, the episode jumped back to the present where she was slaughtering walkers in an attempt to find Judith. She eventually found Judith out slaughtering walkers herself and had to save her when one grabbed her clothing. Judith revealed that she remembered the time Michonne slaughtered all the kids and Michonne was shocked.

Judith’s words made Michonne think and remember how important it was to look out for their friends. They set out with a horse-pulled car and tracked down Daryl and his group to offer them a lift to Kingdom.

At the end of the episode, two Whisperers arrived at Kingdom and saw people arriving for the fair. One told the other that they must tell Alpha!

Can’t wait for the next episode? Check out our preview of The Walking Dead – 9×15 The Calm Before.