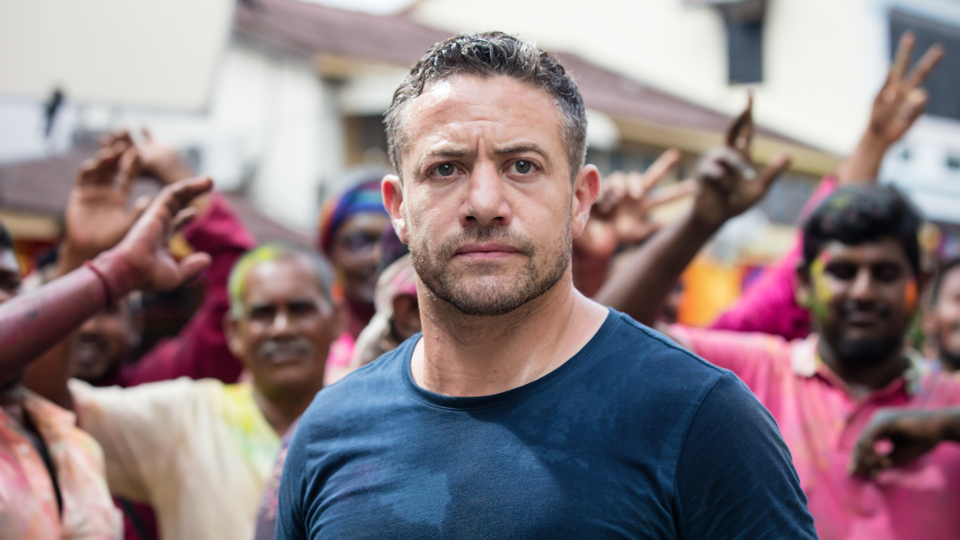 The third episode of Strike Back: Silent War (season 7) saw the team head to Goa in pursuit of the stolen nuke.

The episode opened up in Goa, India where a scientist was abducted after going to pray by a man named Gopan (Rudi Dharmalingam). He was thrown into a van at gunpoint and a bag placed over his head. His captors took him, and others they had abducted, to the location of the nuke, presumably needing his expertise.

Zarkova (Yasemin Allen) and Novin (Alin Sumarwata) discussed using a local fixer named Bharat that Zarkova had used previously for information. They visited his house but he was not there, so Novin tried to pick the lock. As she did she spotted him and he ran off. Mac (Warren Brown) and Wyatt (Dan MacPherson) gave chase and tackled him to the ground.

They wanted information on the stolen nuke but he had heard nothing about it. However, he did know that three nuclear scientists had been kidnapped and one possibly escaped.

They returned to Coltrane (Jamie Bamber) with the information and he introduced them to LCpl. Manisha Chetri (Varada Sethu) who was running IT. She had been investigating the missing scientists and uncovered that Samira Shah (Pallavi Sharda), daughter of one of the escaped scientist, had made a large payment on her credit card for meds that could treat radiation poisoning.

Meanwhile, Gopan went to see a woman named Anjali Vartak (Shivani Ghai). He updated her on the missing scientist and she told him to deal with it personally. She also spoke of their aim to change the nation. He said he had something more important to take care of as he’d found the man who killed her son.

The team went to visit Samira to see if she knew where her father was. She said he wasn’t there but they realised that something was wrong and began an assault. They killed some men inside who were holding her father, professor Shah (Chacko Vadaketh). He explained how he had been taken to a warehouse with the nuke and had managed to escape. He said the terrorists plan was to turn the nuke into two portable nukes. Suddenly Gopan arrived with a small army so the team fled with Shah and Samira.

Wyatt drove as Chetri tried to help direct them to safety. The terrorists were close behind but Wyatt found their way blocked by some kind of street festival. With no way to drive through they continued on foot. Coltrane arranged an extraction point at a nearby park where he would meet them.

As they made their way through the crowds, professor Shah took ill. Zarkova answered a phone call and then was grabbed from behind, it was her handler Pavel (Alec Newman). He said Colonel Beshnov had sent him as he was worried about her. He gave her a portable drive to get evidence of progress.

As the team engaged the attackers in the crowd, Gopan managed to get close to the professor and stabbed him. Before he died he told the team that he had seen Anjali Vartak with Gopan at the site of the nuke. Coltrane arrived and took everyone back to base.

While Coltrane and Chetri briefed the team, Zarkova used the drive that Pavel gave her to steal information. They wondered if Vartak was Kingfisher and bankrolling the terrorists. Meanwhile, Gopan had captured the man responsible for the death of Vartak’s son. The man begged for his life but she shot him in the head.

Back at base, Wyatt kicked off at Chetri for the bad intel and blamed her for the death of the professor. Coltrane spotted Zarkova trying to steal information and had Mac torture her until she confessed. She explained that her Colonel wanted to blacklist her and that she needed to provide proof of progress. Coltrane and Novin wanted her gone but Mac thought keeping her around was a risk worth taking. While this was going on, Wyatt apologised to Samira about her father and promised to protect her, then they slept together.

Coltrane suggested they look into Vartak’s finances because there should be plenty of transactions. Chetri told the team that Vartak ran a charity and Coltrane said that they were guests at a fundraiser that evening. Their cover was to pose as American investors looking for business opportunities. Coltrane said Mac needed to obtain a security pass and clone the hard drives in the office. Novin was tasked with taking out the power so that Chetri could take out the security cameras. Wyatt was put on running interference if anything went wrong. Zarkova was told to stay behind.

At the party, Mac bumped into a security guard and stole his pass. Meanwhile, Novin went to knock out the power and was spotted by a security guard. A fight broke out and Novin eventually got the better of him and put him in a choke hold until he slipped unconscious. She knocked out the power and Chetri got to work. The system was different to she was expecting forcing her to shutdown the entire security system. Coltrane realised this would raise suspicions so told the team to be careful.

Mac made his way to the security offices and managed to avoid security. Inside he found a man smashing up a mobile phone with a claw hammer. When he spotted Mac he threatened him with the hammer so Mac punched him in the face. He took a photo and Chetri ran it through facial recognition. It showed the man as Connor Ryan (Aidan McCardle), Vartak’s personal lawyer who looked after her finances. He confessed to ripping Vartak off so Mac took him with him.

Wyatt spotted Samira at the event and moved to intercept. She was obviously still upset and Wyatt was worried she would do something stupid. He told her to leave it but she took a gun off security and fired at Vartak. One of her bodyguards took a bullet for her while another returned fire. A bullet struck Samira in the abdomen. Wyatt tried to help her but was grabbed by security.

Mac had to fight his way out with Connor. They got stuck on a balcony with security closing in. Mac called for extraction and then he and Connor jumped, landing on a table below. Mac took out another guard before Connor ran into the road. Mac pushed him out of the way and got hit by the car himself. Novin arrived and extracted the pair of them.

Suddenly, the power went out back at base. Coltrane had Chetri uncuff Zarkova and they both grabbed guns. They found themselves under attack and a gunfight broke out. The attackers threw a grenade which narrowly missed Coltrane. He and Zarkova killed some of the attackers and retreated to a different room. Coltrane set charges and then they left the building.

At the end of the episode, Coltrane detonated the charges, Zarkova threw a flare and then they began an assault on their attackers. Coltrane and Chetri made it to their vehicle, Zarkova was pushed to the ground by Golpan who then shot her.

Can’t wait for the next episode? Read our Strike Back: Silent War episode 4 preview.

In this article:Cinema, Sky One, Strike Back