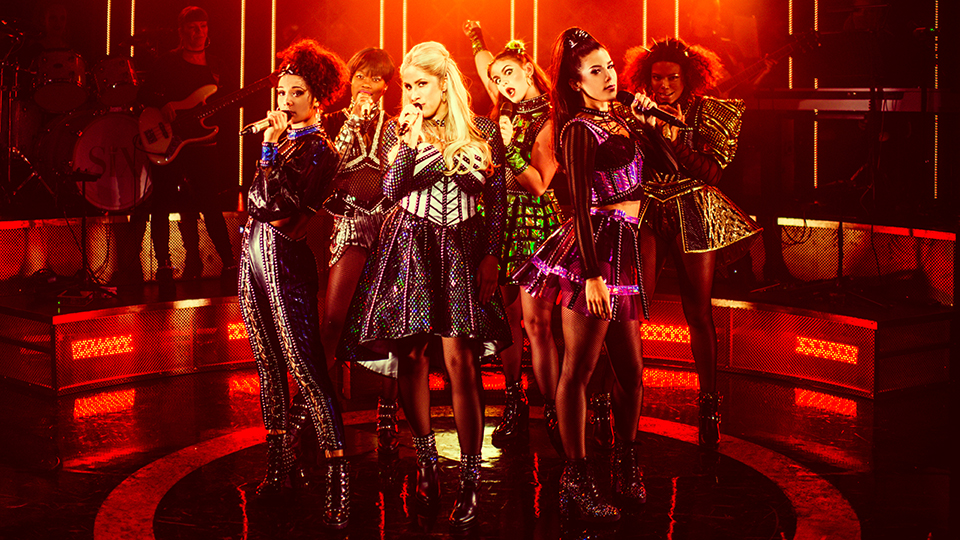 There couldn’t possibly have been a more apt thing to do the eve before International Women’s Day than watch Six The Musical and I wasn’t the only one who thought so. Upstairs in the bar, before the show even started, every inch of space was being proudly and joyously taken up by the huge female audience absolutely buzzing to see the much talked about Six.

As soon as the show starts – genuinely – the second we see the six leads (because they are all leads) in all their resplendence we know we will not be disappointed. I say ‘we’ because the rapidity and seamlessness with which this production creates a sense of collectivity among us watching is artful and thrilling – bordering on magic.

Jarneia Richard-Noel, Millie O’Connell, Natalie Paris, Alexia McIntosh, Maiya Quansah-Breed and Courtney Stapleton play Henry the 8th’s Six wives who are embarking on a real time competition to establish who ‘the best queen’ is based around audience responses to their pleading cases. These pleas occur in the form of re-imagined contemporary pop bangers describing their plights -think harpsichord versions of Destiny’s Child remixed with punk versions of Greensleeves. The instrumentals are provided by the cleverly titled ‘Ladies In Waiting’ who are also omnipresent onstage and comprised of Alice Angliss, Amy Shaw and Terri De Marco, who treat us to a hybrid mashup of powerful musical influences from pop and punk to EDM and dubstep, which complement each of the different wives personas perfectly.

Dressed in sparkling striking costumes which put an absolute outfit goals twist on the Tudor uniform (thanks to costume designer Gabriella Slade) our girls each bring their own fierce individuality to the stage. It’s safe to say: they are the girlband of dreams. Every single one of them is an indomitable shining powerhouse but no two of them are at all the same. Every girls brings their own unique touch, tone and physicality to the space while generously and compassionately remaining forever in sync as an ensemble. This is glorious to watch.

Yes there is an obvious commitment to create a feel-good and liberating energy but what’s brilliant about this show is it encourages said liberation without compromising or glossing over the struggles of the six women, and in essence all women. It follows therefore, that in among the moments of fist pumping glory and surprising hilarity (Best. Trip. To. Germany. Ever.) there must also be flickers of deep sadness; Courtney Stapleton had the audience holding back tears as as she sang her own swan song and Aimee Atkinson’s retelling of countless men using her for sex created a rare moment of silence in the stunned but sadly knowing audience.

Heavier moments were played out and allowed to breathe without being mawkishly dwelled upon – just enough though to highlight the bold feminist heart with which Toby Marlow and Lucy Moss began writing this epic production in 2017 – they remind us of the pantomime of trauma women are expected to play out in a bid to gain kudos from patriarchal society. In the programme the writers list their 6 point manifesto for what they wanted Six to really say and stand for – it’s safe to say they achieved this, and then some.

Six is a stompingly good work of art, which is brilliantly accessible but it’s also a loud self reflective and unapologetic statement about the state of commercially successful theatre. Six female leads, of different races, with different body types, different accents, all integral to the story, fully written, performing to a sold out audience and receiving an audience wide standing ovation? Yes please. THIS is future of theatre we’ve been gagging on for. Bring everyone you know.

In this article:arts theatre, SIX The Musical