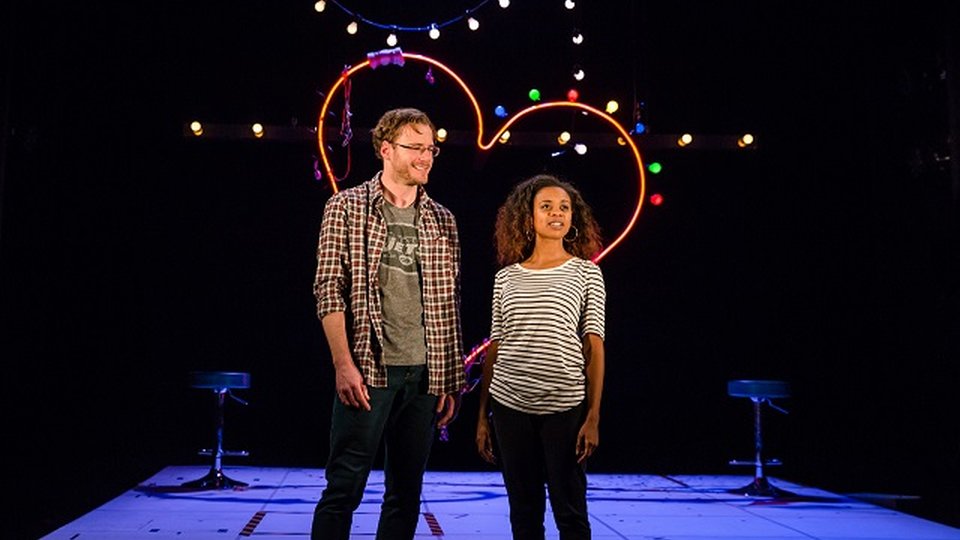 My face should be the Litmus test for romantic comedies: I either smile throughout, or involuntarily scowl and excavate new wrinkles. Fortunately for my ageing visage, the 80 minutes spent at The Arts Theatre last night didn’t call for a collagen face mask afterwards. Dirty Great Love Story – a tale of boy-meets-girl who can’t get away fast enough after a one night stand – was refreshingly witty and authentic.

It’s a relatable, albeit unoriginal, plot that’s guaranteed to tug at the memories and heartstrings of both couples and singletons. Katie and Richard meet in a club. She’s at a hen do and he’s with a stag party. She’s not over her ex and he’s a hapless Geek. With the help of many shots, they get it on and then… she never wants to see him again! Two years of embarrassment follow as they keep crossing paths and can’t shake each other off.

Originally penned and performed by Katie Bonner and Richard Marsh, their self-titled characters are entrusted to actors Ayesha Antoine and Felix Scott for the show’s West End run. Taking on three characters each (two of which may grate on audiences) and a cunningly sparse set by designer Camilla Clarke, the actors steer the story to its conclusion with convincing angst and humour.

Antoine and Scott particularly excel in balancing the tenderness of love and romance with the harder punchlines of judgement and rejection. Some of their scenes are a tad too long but it’s easy to ignore this flaw when the script is so generous: memorable one liners, laughs, gasps, “OMG” moments and cringe worthy twists are abundant throughout!

Of course, no love story would be complete without poetry so having the characters narrating much of their experiences in verse is apt. In fact, the play originally began as a 10 minute long poetry duet in the back room of a pub in 2010, before opening at the Vault Festival with a new title. It has evolved into its current incarnation with the help of director Pia Furtado, picking up awards and praise after stints in Edinburgh, Bristol and New York.

Leaving the theatre last night, with my face still fixed into a painless grin, the late Rat Pack legend, Dean Martin, came to mind. He once sang, “When the moon hits your eye, like a big pizza-pie, that’s amore.” Orson Welles took great fun in ribbing the crooner on a televised roast, in the 1970s, for these ‘profound’ and ‘romantic’ lyrics. Yes, they’re illogical and amusing, yet so, too, are the quests of many singletons chasing love. Dirty Great Love Story encapsulates that erratic journey with aplomb – a marvellous ride through the thrills and humiliation of sex, dating, love and romance.