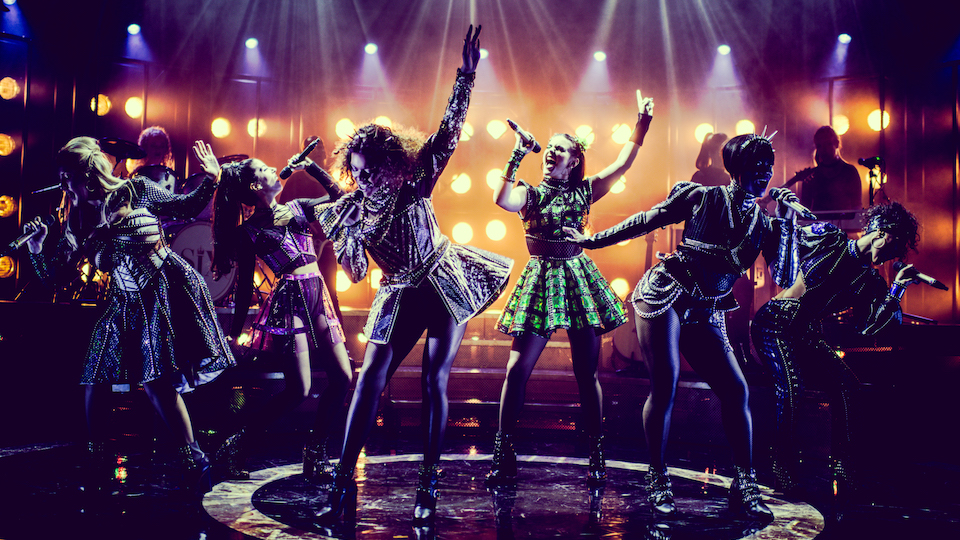 ‘Seriously old skool’ meets new writing in this witty piece packed with puns, penned by Toby Marlow and Lucy Moss. Toby and Lucy met at university in Cambridge and, in January 2017, writing as a duo for the first time, they produced SIX. It’s quite remarkable. They wanted the show to be ‘The six wives of Henry VIII but, like, a pop group.’ It sums up the premise in a sentence. Yes, some will cringe at the mere thought. Believe me, when I first read the synopsis, I did too. As a History graduate (2:1 BA Hons, donchaknow) I can hand-on-heart say that this musical drags the dull and dowdy view of Henry VIII’s wives forward 500 years in the most wonderfully effervescent way. These are not just throw-away bubblegum pop tunes. While this show is about as far away from a fusty lecture hall as you can get, some genuinely interesting facts are thrown in which the more knowledgeable in the crowd will nod smugly to. All this is achieved while staying fiercely accessible to the ‘Netflix generation’, with language that teases and would certainly leave your teacher blushing if you were on a school trip. (Go on, Miss, book tickets and let the class have some fun.)

Each Tudor queen takes her turn, with differing sounds inspired by modern-day artists such as Beyonce, Alicia Keys, Adele, Nicki Minaj and Lily Allen. You just can’t wait to see where they’re going to take it next. It’s undeniably impressive to see how Marlow and Moss have played around, and taken great liberties with, the characterisation of our leading ladies. Aragon, Boleyn, Seymour, Cleves, Howard and Parr become relatable as lyrics packed with raw emotion and humour fill the auditorium. Ultimately, our all-female cast recognise, with dismay, that being married to Henry VIII is the only reason why they’re remembered in the history books and there can be no favourites. It rather narrows their narratives (and the writers do admit that the play doesn’t really pass the Bechdel test) but, without these women and their contributions to his story, would Henry VIII really have taken up such a huge chunk of the syllabus?

SIX is the History lesson you didn’t know you’ve been waiting for. Tongue-in-cheek and energetic from beginning to end, the all-female cast put every ounce of their sublime vocal talents into the performance. So much so, it’s impossible to choose a stand out star from the ensemble. I expected Anne Boleyn to steal the show (and Millie O’Connell’s cheeky grin and executioner’s gloves-inspired hair bands very nearly do). Yet, it was the humorous swipe at modern dating from Anna of Cleves (Alexia McIntosh) and her knowing rendition of Get Down – “I’m the Queen of the castle, get down you dirty rascal” – that brought the most riotous reaction. That is, until the encore brought the crowd up on their feet, whooping, cheering and, for a moment, it seemed they’d utterly lost their heads… Long may SIX reign as a celebration of ‘Her-story’ that pokes fun at the past while remaining (mostly) true to it.