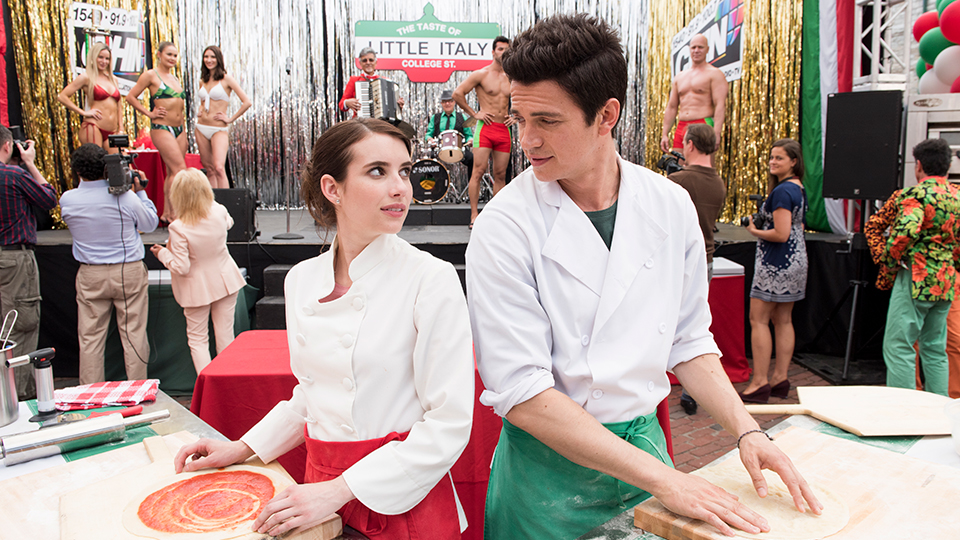 Childhood friends Nikki Angioli (Emma Roberts) and Leo Campo (Hayden Christensen) have always had a connection but they’ve never acted on it due to their warring families, who both have pizza restaurants in Little Italy, Toronto following a joint venture gone wrong. After spending time in England, Nikki returns to Little Italy to prepare for a cooking exhibit. She immediately is drawn back to Leo but will the two give in to their feelings, which will cause ructions with their families?

Little Italy aims to be a sweet romantic comedy but unfortunately it follows so closely to typical romantic comedy formula that there’s absolutely nothing new or original. From the film’s opening moments where we learn about Nikki and Leo’s childhood bond, you know exactly where the story is going. In fact, you could probably stop the film and write the rest yourself and the chances are you’d do a much better job.

For a romantic comedy to be successful, the script needs to be funny and the leads need to have chemistry. Both of those things are missing here. The laughs are few and far between, and mostly come from a sub-plot involving a secret romance between the grandparents of each family. As for chemistry, Emma Roberts and Hayden Christensen don’t so much sizzle on screen as fizzle. Roberts is usually reliable but she has nothing to work with here and Christensen is completely devoid of charisma. Watching them together is actually pretty painful.

Another area the film falls down is in its very basic stereotypes of Italian people. Every single check box is ticked and there’s no development or depth to anything that goes on. Alyssa Milano is completely wasted as Nikki’s mother Dora but she’s pretty much the only person that comes out of the film well. Why she signed on to this, and why any of the other talented cast members did, is a bit of a mystery.

Little Italy is a lazy, dull and formulaic rom-com that sadly doesn’t serve up what it should. There was a real opportunity for this to be a little gem of a film but it’s just bad. I wouldn’t recommend it to even the most die-hard of rom-com fans. With stereotypes a plenty, a lack of believable romances and disappointing performances, Little Italy misses the mark in every way possible.