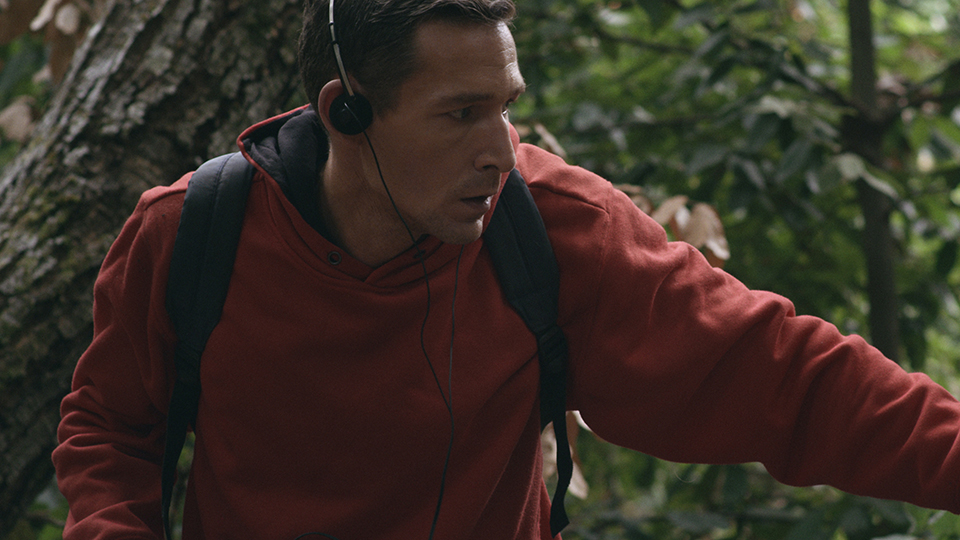 On a dangerous gay cruising trail Noah (Stephen Twardokus) and Patrick (JD Scalzo) meet each other for the first time. Warned by the Park Ranger (Steve Callahan) to stick to the path and not go beyond the cordoned-off area following a number of disappearances, the two strangers ignore him and take themselves into the heart of the woods. When Noah is attacked by two men, he and Patrick find themselves locked in a cat-and-mouse game as they fight for survival with only each other they can trust.

Devil’s Path is the feature film directorial debut of Matthew Montgomery, who co-wrote the screenplay with lead actor Twardokus. Pitching itself as a gay thriller, Devil’s Path initially looks pretty promising with an intriguing set-up. It’s established early on that both Noah and Patrick may not be as trustworthy as they seem and the film plays on the thrill, and fear, of gay cruising. The two men have relatively little in common other than that they are both gay and on the lookout for someone to hook up with.

Once Noah is attacked, the film starts to fall apart a bit. While the two men are supposed to be fighting for their life, they are forced to regurgitate clunky dialogue that is at best unnecessary and at worst laughable. If I were running for my life from two killers, I probably wouldn’t start spilling my guts out to a guy I’ve just met on a cruising trail. What also doesn’t help is that neither Noah or Patrick is all that likeable so you’re very unlikely to invest too much in whether they live or die.

In the film’s second half, it believes itself to be clever than it is. I worked out the twist within the first 30 minutes and I could see exactly where the plot was going. There are too many sign posts throughout the film for it to be any kind of surprise. By the time the credits rolled I was unsurprised with where the film ended up and was honestly just very underwhelmed with what had transpired.

Twardokus and Salzo are passable in their roles. Neither is able to get into the grit of their characters and they are a bit wooden in their delivery. The chemistry between them is non-existent, which makes it even harder to care what happens to them. Part of the problem is the script, which is underwritten and far too loose for a film that’s attempting to be a taut thriller.

Devil’s Path had the potential to be a lot more than it ends up being. It’s a shame really as the premise is interesting but it’s so clumsily handled that there are no surprises to be found along the way. What you end up with is a very run-of-the-mill thriller with a gay twist and sadly that’s not enough to make this worth watching.