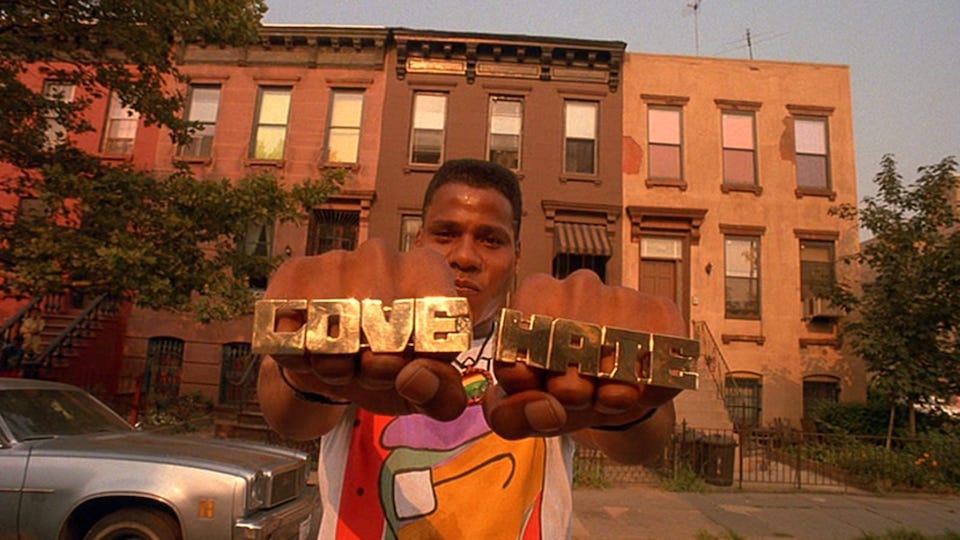 Do The Right Thing, the essential Spike Lee joint, the film that catapulted him into the mainstream, is released on special edition Blu-ray this week on the Criterion label, and let me tell you, it is a beautiful thing. Given an absolutely stunning 4K digital restoration, and packed with extras across two discs, this is a release you simply cannot afford to miss.

From the iconic credit sequence of Rosie Perez (making her film debut) dancing to Public Enemy’s Fight the Power, the tone is set for something special. It’s the hottest day of the year, and on one block in the Bedford-Stuyvesant neighbourhood of Brooklyn things are about to get even hotter. Set in and around the local pizzeria over the course of one day, the simmering racial tensions in the community begin to rise, until eventually exploding into shocking violence.

Potent, politically charged, and sensationally entertaining, Do The Right Thing is an excoriating examination of the race, class, and generational divides in America. Thirty-years later you would hope it would feel dated, but the relevance is almost too painful. When a young black man is murdered by the police in front of a crowd of helpless onlookers, you just think yep, this is America.

Featuring an incredible cast of flawed characters, written with great sympathy by Lee, and performed brilliantly by the likes of Danny Aiello, Ossie Davis, Ruby Dee, John Turturro, Giancarlo Esposito, Martin Lawrence, Samuel L. Jackson, Bill Nunn, and Lee himself as Mookie. Aiello’s Sal is the central character, the owner of the pizzeria and a fixture of this predominantly black neighbourhood for twenty-years. He sees himself as a bit of a neighbourhood don, condescendingly proud that “these people” have grown up eating his food. Lee writes Sal brilliantly, and Aiello’s performance is note perfect. When he is challenged about not having any photos of black pop culture icons on his wall of fame, despite all his customers being black, his avuncular facade begins to slip and the touch paper is lit for the violence that follows.

Do The Right Thing is a visually and aurally stunning film. From the driving refrain of Fight the Power, to the hyper-stylized visuals, the vibrant production design, and Ernest Dickerson’s amazing cinematography, it is a beautiful film to look at. You can feel the heat coming off the screen. Lee’s film has never been timelier, and in a career filled with incredible work, this remains his masterpiece.

This special edition comes loaded with extra features, some of which have been ported over from previous Blu-ray and DVD releases, and others which are brand new and exclusive to this release. First up is a feature length commentary with Spike Lee, cinematographer Ernest Dickerson, production designer Wynn Thomas, and actor Joie Lee. This was recorded in 1995 for the laserdisc edition.

The disc also comes with some remarkable behind the scenes footage, shot by Lee and his brother Cinqué. This hour-long featurette covers from pre-production and right the way through to the post-wrap party. There’s also 15-minutes of un-remastered deleted and extended scenes, which highlight how stunning the 4K restoration of this release truly is. The disc also comes with the storyboards for the riot sequence, introduced by Spike Lee. Finally, there is the theatrical trailer and two TV spots. But that is only disc one.

Onto disc two and we kick things off with Making Do the Right Thing, an hour-long documentary shot during the summer of 1988 by St. Clair Bourne. This is essential and eye-opening insight into the shoot of the film, and the real Bed-Stuy community. The One and Only Do the Right Thing is a brand-new feature produced exclusively for this release, with NYC council member Robert Cornegy Jr, writer and director Nelson George, and filmmaker Darnell Martin discussing the legacy and continual influence of the film.

Also included on the disc is the full 40-minute press conference following the world premiere of the film at the Cannes Film Festival in 1989. The panel includes Spike Lee, Ossie Davis, Ruby Dee, Joie Lee, and Richard Edson. There’s also a 10-minute interview with the film’s editor Barry Alexander Brown, and a brand-new interview with costume designer Ruth E. Carter.

Back to Bed-Stuy is a short programme from 2000 with Spike Lee and producer Jon Kilik revisiting the block in Bedford-Stuyvesant neighbourhood in Brooklyn where they shot the film. Twenty Years Later is a programme from 2009 to accompany the 20th anniversary screening of the film at the Lincoln Centre in New York. Following the screening, Spike Lee conducted a series of interviews with the cast and crew, including John Turturro, Rosie Perez, cinematographer Ernest Dickerson, and Public Enemy’s Chuck D.

Which leads nicely to the music video of Fight the Power, the anthem of the film, which was shot by Spike Lee. Spike’s Last Word is a short video made by Lee for the Criterion DVD release from 2000. As always, he is a man with something important to say, and his reflections on the film are fascinating. Finally, the booklet with the disc comes with an essay by critic Vinson Cunningham, and excerpts from the journal kept by Spike Lee during the production of the film.