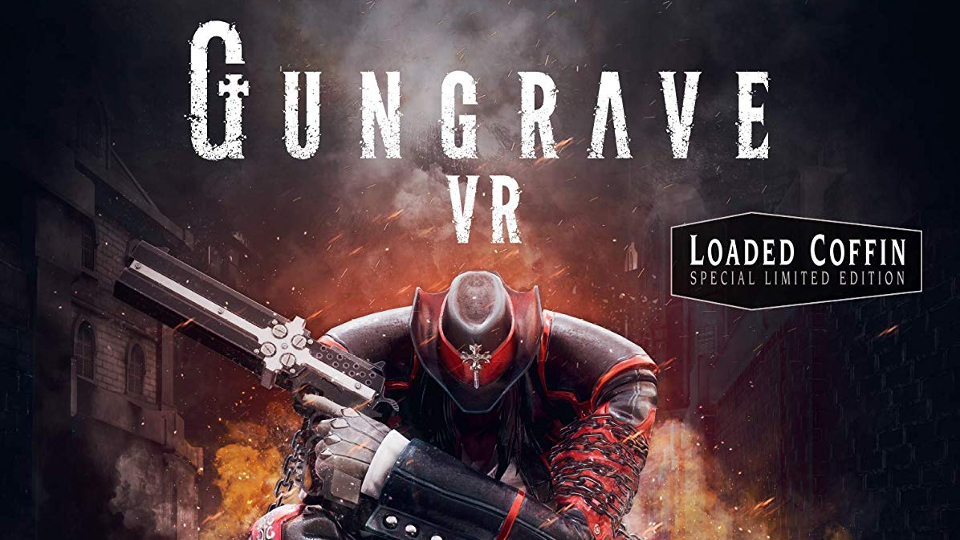 Note: This review also includes the standalone expansion pass Gungrave: Overdose VR U.N as a whole package due to the review being the Loaded Coffin Edition.

I remember running home from school back in the mid-2000’s, back to the safety of my PS2. Some of the games that I loved were action games. Devil May Cry was king at the time, along with God of War. I also loved the mid-tier action games like Van Helsing and Darkwatch. Yes, I even loved God Hand. Gungrave slipped by me, it looked really cool with it’s hellish setting but I was probably playing Silent Hill or Resident Evil for the hundredth time instead. Now, I get to introduce myself to this world in the best way possible, in VR.

Gungrave VR opens with a small wall of text, explaining that a horrific drug called SEED is taking over the world and you are the only one capable of stopping it spreading across the globe. That’s all the story you get. The entire story of the game lasts less than 10 seconds and even defeating the last boss nets you nothing.

The expansion starts with a moderately decent animated cutscene that got me excited but after 3 seconds and no information, it was over. Another 3 second cutscene at the end that shows absolutely nothing. The action games of the PS2 age always had fun and silly stories. They were over the top, pointlessly “cool” and threw in a bit of darkness and drama to keep you invested. Here you get nothing at all. I understand this is a VR title and there aren’t as many resources available but this is really disappointing. I don’t know who I play as and why I care but this is a short VR title so let’s see if it can offer fun in its gameplay.

Gungrave VR is a 3rd person shooter, no wait it’s a 1st person shooter, actually no, it’s an on rails shooter. It doesn’t know what it wants to be and mission to mission it varies, which should be good but it does none of it well enough. You use the DualShock controller and your head to aim. It’s responsive enough but the hit boxes are very poor. To make up for this there is a time slowing ability that helps massively but removes all difficulty. A very basic dodge and melee button round out your repertoire and it all works fine enough.

The major issue is with the camera. To see behind you, you must flick the analogue stick and the camera snap turns to different positions. This is infuriating and makes each combat encounter a chore, having to keep track of enemies isn’t fun and they can obscure your vision when they are too close to the camera. You have to flick the stick 6 times to see behind you and 6 more times to see in front, enough time to die and this happens constantly. I understand that VR causes sickness to some people but there is no option to change this, which at least other VR titles offer. While not a difficult game, it doles out little health pickups and resorts to long battles with bullet sponge enemies making the game feel more like a job than an experience. There is absolutely no sense of progression as there is no levelling or new weapons to collect. I also can’t forgive the game for having one of the worst final bosses I ever fought.

The expansion fares a little better, it’s mostly a side scrolling adventure that’s fast paced but goes the opposite way of the main game in that it’s just too easy. If they had focused on this as the gameplay system they could have had a halfway decent game but as it stands it’s just not fun. Even the worst VR titles offer something new and I left this not knowing why it was even in VR.

View some Gungrave VR screenshots in our gallery:

Visually, it’s pretty bad. It looks like a shiny PS2 game and that only applies to outdoor levels. Indoor levels look exactly like a PS2 title. To be fair there is some nice lighting and the particle effects are quite good. The soundtrack is forgettable and what little voice acting there is, is flat and emotionless. The main title has a nasty bug that causes audio to frequently cut out, though it isn’t present in the DLC.

Once I finished these games, I took to Google to do a bit of research on Gungrave and I can tell this is nothing like the main series. If this is the introduction to the universe, it has failed and I can’t recommend it for the story. I also can’t recommend it for the gameplay. DLC included, it’s under 2 and a half hours long with no replay value so it’s not as if you’ll want to re-download it when you’re done. There are dozens of games on the PSVR that do it better and for cheaper. I don’t even know why it’s in VR as it doesn’t do it even do that well. If you are desperate to play it, get the standalone expansion, as it at least offers something tangible but since you’ve already got a PSVR, get something like Until Dawn: Rush of Blood instead.

Gungrave VR was reviewed using a digital code supplied by the publisher.

In this article:Gungrave, PSVR, VR